We found the masters and they're not all jacked up 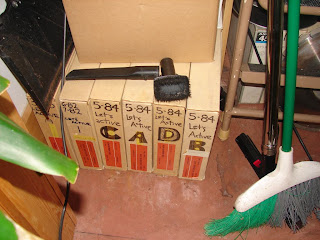 When I reflected on what Robert Goetz and I were able to accomplish last night, after what was a very long day for both of us, I thought of this snapshot that I took when I visited legendary indie rock producer Mitch Easter in his new studio, The Fidelitorium, this summer in Kernersville, N.C.

These are master recordings for Mitch's equally legendary indie rock/jangly pop band, Let's Active. It may appear highly unromantic to find his masters languishing on the floor of a closet, but as anyone who has juggled multiple projects over a span of decades knows, the only truly important things about masters are that they don't get damaged and you know where to find them.

These Let's Active masters are not damaged, and Mitch knows where to find them. Good enough! Last night, I discovered the same to be true of a set of masters I have been toting around the country for as long as 13 years.

Robert and I are part of a production team that will be working in three cities (St. Louis, Los Angeles and Nashville) to score Les Murray's great poem about modernity, The Sydney Highrise Variations, with a deadline set for next fall, when Poetry Scores will release the project on CD (with an accompanying booklet) at an art invitational devoted to the poem.

I'm sure we won't always do it my way - I envision commissioned pieces in our future - but as creative director for Poetry Scores, I have evolved one way of scoring a long poem that works for me, as a guy who can't read or write music on the page and has primitive musical skills.

I tend to sit with guitar tapes submitted to me by my songwriting partners, Matt Fuller in Los Angeles and Lij in Nashville. (We used to write and record together in the St. Louis bands Enormous Richard and Eleanor Roosevelt.) As I listen to their song fragments, I flip through poems I want to score, trying to find melodies in the chords and to attach them to words.

When I am fortunate enough to actually be in the same place at the same time with one of these guys - usually once a year in L.A., where journalism takes me and professional production projects take Lij - then I get to go through this process, but with a living, breathing, strumming guitarist, rather than a cassette deck. Though if it's Matt, then he's likely to be combing through a bag of songwriting tapes of his own as we go along.

This process produces song settings, sung texts. Matt and I came up with a compelling suite of rock songs for Sydney Highrise one blessed afternoon in Coldwater Canyon last year. But that's not the only way we score poems.

I also sift through other kinds of source recordings, listening for instrumental passages that might serve as a break from language on the score, as an instrumental titled after a suggestive phrase of the poem. Local musician Frank Heyer contributed two CDs of wonderfully strange improvisations that yielded two such pieces for the Sydney Highrise score.

I also always go back to the bottomless wellsprings of creativity that is Richard Derrick in San Pedro, with his projects Middle Sleep and Another Umbrella. Neither group is currently working, and a physical condition now hampers Richard's ability to play music to his full ability, but he has cultivated a vast archive of source recordings that he has made available to us as his friends and advocates. We will be adapting about five different Middle Sleep pieces in various ways on the Sydney Highrise score - as otherwise untouched musical beds for readings from the poem, as song fragment for sung text, and as improvisations to make the basis of additional improvisation.

For readings, of course, one needs a reader. When the poet is alive, as Les Murray is, and when he is a compelling reader of his own work, as Les Murray is, we try to record the poet reading his or her poem. I did this with Les some 13 years ago when he was visiting New York City and I lived on Long Island. I brought him across the East River and recorded him with the help of a Turkish club deejay in his apartment in Long City, a story I'll tell in full one day, it's a hoot.We also recorded Les making what he described as "mouth music" to the poem, beginning with the whistling of the wind at the top of the bridge that sparks the poem's opening movement, and including the guttural roar of a jet airplane, when he bundles the 19th and 20th centuries up in the image of an airliner gone out of control.

I also tend to invite other songwriters I admire to get involved. Usually, they don't, for whatever reason. In this case, one did, Robert Goetz himself. A number of years ago, when first handed a copy of the poem, Robert tried to write to just about every part of it and came up with two beautiful songs, two whispery acoustic ballads.

Put all of this together, and what do you get? A poetry score, eventually. In the meantime? A morass of masters of source recordings. What are the only things that matter about masters? That you don't damage or destroy them, and that you know where they are.

Last night, I showed up at Robert's house with an O'Fallon 5 Day IPA sixpack carton full of source masters: a mockup of Matt Fuller guitar tapes with my scratch vocals, two homemade CDs by Frank Heyer, a dozen copies of master discs from the Richard Derrick archives, the Les Murray master, even the master of Goetz's own recordings, which Goetz himself no longer possessed or knew where to find.

Each of these artifacts came marked with a sticky note with circled numbers, indicating the tracks of interest, or with a small forest of notes that encoded the same crucial information. Somewhat to my surprise, as we popped in each of these discs, it was the right disc, it wasn't damaged, and the circled number or mass of notes did indeed point to exactly the piece of music from that disc we would be needing to score this poem.

I think we're going to score us a poem!

Come on back for working notes and (eventually, when Meghan Gohil of Hollywood Recording Studio gets his upload site set up for us) audio sketches of work in progress.

Posted by Poetry Scores at 8:20 PM

it may be immodest for me to suggust it but have you visited http://myspace.com/learnartist ?