Milling raw uranium into fissionable material was, in reality, a massive industrial process that required the construction of a facility the size of an entire town in Tennessee. We are making a silent movie on no budget in the style of a fable, so we are taking matters into our own hands, or into the hands of our zombie uranium millers.

We have now found that kitchen -- and in proprietor Ron Buchuele, we may even have another zombie uranium miller. 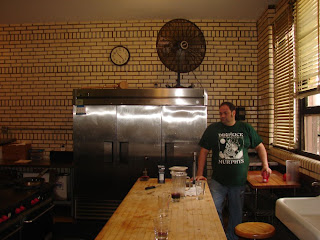 We can get a nice long shot from this angle, and only need to move the fan and the clock. Zombies tell no time and need no fan-blown breezes. 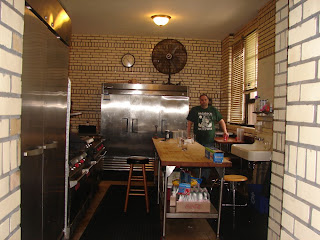 A longer shot. The stuff under the table needs to go, too. 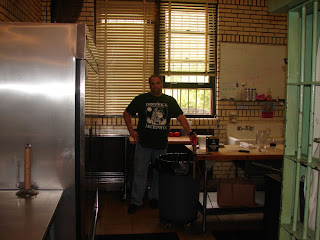 We can shoot in from another angle as well. Trashcan comes out. 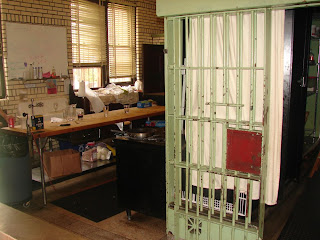 This angle nicely permits a glimpse into a jail cell (Mad Art is a renovated police station). I say we staff the uranium mill with some solidiers and have them hang out in the cell when they aren't watching the undead do their thing. 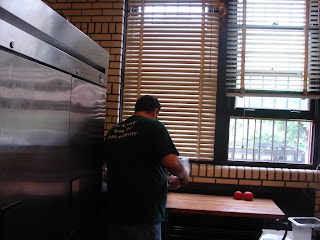 Let's take a look around the space. There are windows we'd need to mask from the outside so the changing light doesn't mess with our shoot. 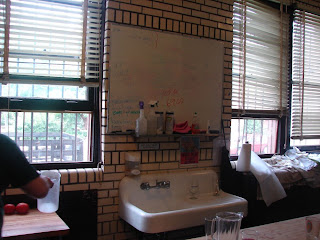 We are stuck with the dry erase board, but can draw some nuclear physics on there, which will help tie the uranium mill to the bomb shop at Lost Almost (Los Alamos). 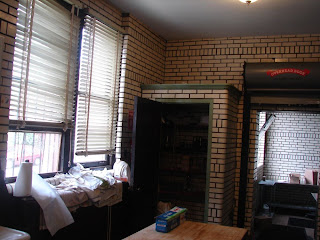 Logo on the vent needs to be masked with "debased cogs" logo. Our movie is based on a poem by the same name by Stefene Russell; "debased cogs" is her phrase for uranium workers. 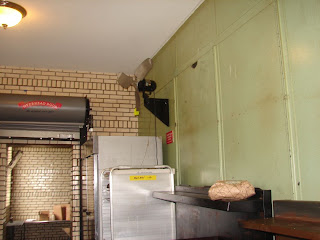 Love the green paint, almost as much as the silver freezers. 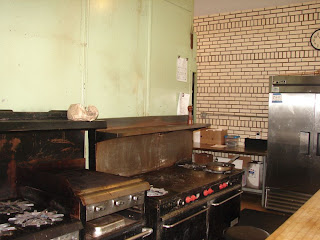 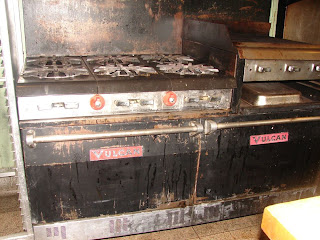 "Vulcan" is so primal I say we leave the logo. 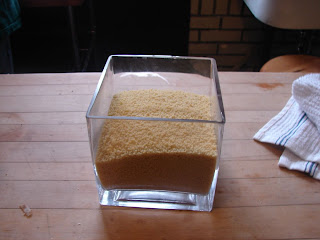 I talked Ron through my concept for the shoot, and he said for the granular thing the zombies bring in as if from the uranium mine, we should use couscous (rather than corn meal, my idea) because it will be easier to mold into shapes. So we got out some couscous. I like the way it looks. More granular than corn meal. 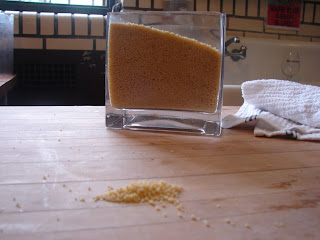 I see zombies playing with couscous in my mind's eye now. Now where do I get a whole bunch of cheap (or free) couscous?
*

For the first poetry scores movie, Blind Cat Black, lead editor Aaron AuBuchon suggested we use zombies when I was looking for a visual element to evoke the Surrealist style of Ece Ayhan's poem (and Murat Nemet-Nejat's English translation). I liked the idea. When I put it into practice, I noticed a huge change. It used to be, when I told people I was making a silent movie, they quietly excused themselves. But when I started telling people I was making a silent zombie movie, they bought a round of beers and we talked for five hours. There was no turning back.

Also, the more I thought about the poems we had scored or were scoring, which would be the basis for our silent movies, I could easily imagine a set of zombie characters in every one. Let's face it. In every story ever told, there is a character or a set of characters that is the living dead, understood in one way or another. Though I have come to make a distinction -- we don't make silent zombie movies, we make silent movies with zombies. Zombies are just one of many elements we use, like poetry, music, the narrative structure and technique of the fable, and St. Louis.
Posted by Poetry Scores at 6:06 PM No comments: 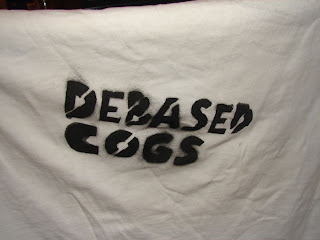 This year Poetry Scores is finishing a movie, Go South for Animal Index. Like all of our movies, it is a silent movie with zombies (as opposed to a silent zombie movie). Our zombies in this movie are uranium miners, millers, and couriers. That's because our movie is drawn from Stefene Russell's poem of the same name, which we already have set to music (we are now shooting and editing to that poetry score), and it's a poem about the Bomb.

Dawn Majors, who is helping us to shoot the movie, took me out to Crystal City Underground, an old sand mine in Crystal City. This is pretty amazing, since we want our zombies to come out of the mine with something that looks like corn meal. They will be trundling it out in wheelbarrows. When it occurred to me that it would cost a lot of money to buy a wheelbarrow full of corn meal, I figured out we could fill up a wheelbarrow of sand then just dust that with corn meal. Well, our mine has plenty of sand.

Further, we need the illusion of mass production, though we only want to shoot a limited amount of action. So it would be perfect if our mine has visible evidence of completed work of the kind we need to simulate completing. Our mine has that, too. 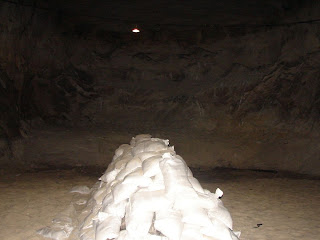 It has a pile of sandbags. So we can shoot our zombies chipping away at the walls, and shake something that looks like corn meal coming off the walls. Then shoot the zombies bagging the corn meal, and putting the bags on this pile of sandbags. They will then fill wheelbarrows from the pile and trundle them out of the mine. 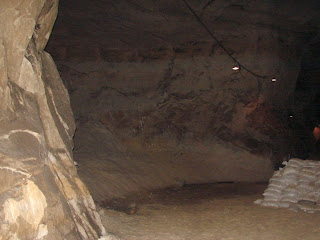 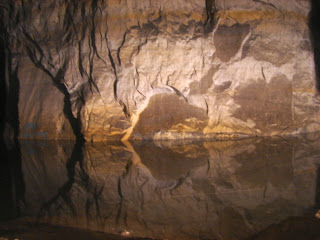 Our mine also has a large underground lake, but it doesn't really fit this movie. Next time. 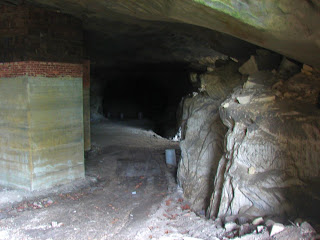 We need to get our zombies out of the mine. This is what one appraoch to the best exit looks like. Not bad. The other approach looks better, but my pictures look worse. 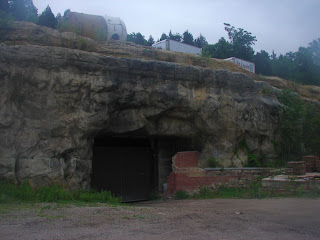 This is the exterior the zombies will emerge from. Probably we will need to shoot tighter so we don't see these trucks (see below). 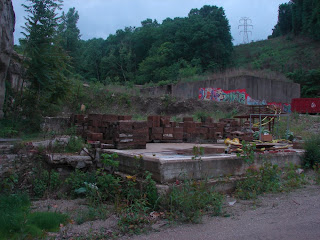 There is some trashy looking stuff in the exterior we'd have to live with or laboriously move, like these bricks. 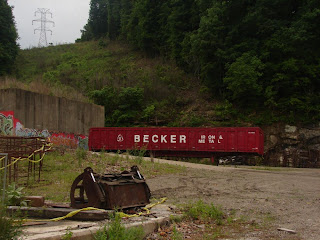 Also, a truck bed with a logo, which we would have to mask (perhaps with a "Debased Cogs"* logo; see above) or shoot around. 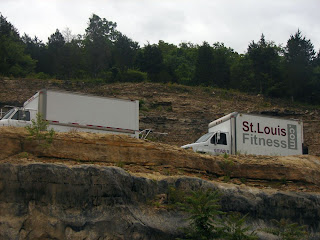 We would also need to mask the logo on this truck, which doesn't run anymore. I guess we'd also need to explain why the zombies don't drive trucks instead of trundle wheelbarrows. Come to think of it, we will need to shoot around the trucks. 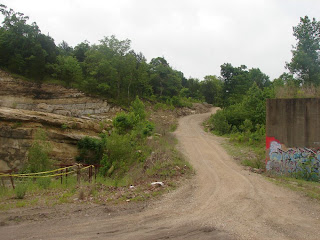 We need the zombies to trundle away from the mine, toward the mill. This road will come in handy for that. 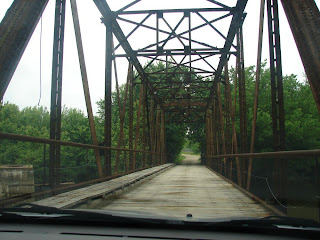 We also have a bridge to play with. Nice river below I should have shot. This is great, because we have rivers in other segments of the movie. 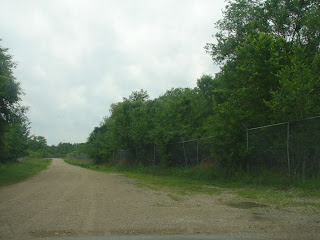 We also need a road lined with barbed wire for people driving in and out of the bomb shop, the military base, Lost Almost. Crystal City Underground has that. 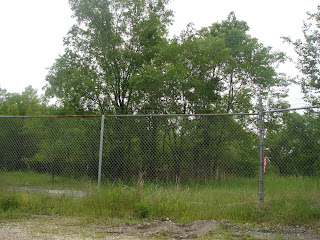 I've been fantastizing about a long fence line like this where we can control traffic. Got it. 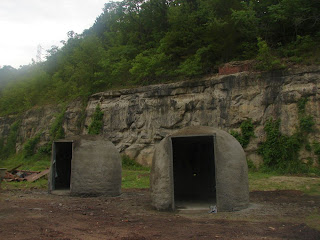 At the moment, the mine also tornado shelters which would make perfect zombie homes. 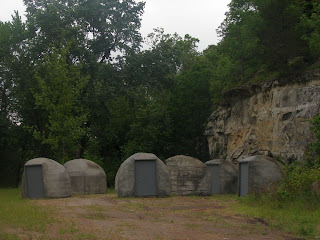 Or a perfect zombie village.
Pretty good day on the location scout, eh? And there's more! (To be continued.)
* "Debased Cogs": In a poetry score, we set to music every line in a poem; our movies are silents shot and edited to these scores. In Go South for Animal Index, Stefene Russell writes:


There are no alchemists, only opportunists
And beneath them the debased cogs
Who bear wheelbarrows, packed full of lightning.

The "debased cogs" in our movie are the grunt workers on the bomb project, the zombies.
Posted by Poetry Scores at 7:18 PM No comments: