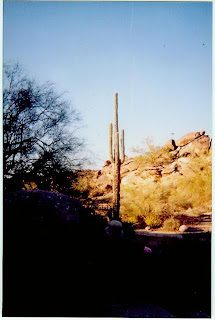 This essay was written to accompany a CD release of the poetry score to Go South for Animal Index by Stefene Russell (producers: Matt Fuller and Chris King) that was released on CD in 2007, in a limited edition that also included an essay about the poem by the poet. (Though nearly out of print, the CD and accompanying pamphlet may still be available in independent book and record stores in St. Louis.) The image is of Matt Fuller working on the score in Phoenix's city park on South Mountain.

“Go South for Animal Index” was just one of many poems I stuck in a folder for my trip to the desert that year. I was flying to Phoenix from New York, where I worked as a travel editor. Matt Fuller was driving from Los Angeles, where he worked as an illustrator, to meet me at the Four Seasons Scottsdale. From the home base of our plush, private villa, we would drive south to South Mountain. Meat Puppets drummer Derrick Bostrom, whom we met on this journey, told us the adolescent Puppets used to haunt South Mountain, just south of Phoenix in a city park, which made us want to write songs up there.

Matt and I had been writing songs together since our college band days. After the band dissolved in the mid-1990s, we kept working together – through the mail and the odd travel hookup – to score poems. We specialized in long poems, which we called “poetry scores” once they were set to music. Up on the desert mountain, I kept picking up different poems, as Matt picked out different guitar parts. They kept not working out. I kept shuffling through my folder of poetry, and I kept returning, again and again, to “Go South for Animal Index,” by my new friend Stefene Russell. Bits of her long poem kept fitting together with Matt’s guitar figures, which he had hoarded and groomed for years. It began to occur to us that we were beginning a new poetry score, and it became gradually clear, over a few days in the desert, that we might finish this thing.

During our chat with Bostrom, the Meat Puppets drummer, we picked his brain about his band and the other bands that had innovated what became known as post-punk rock. First among those other bands that interested us was The Minutemen, from San Pedro, California. Bostrom pointed out that d. boon, The Minutemen’s frontman, had died in a van accident on the outskirts of Phoenix. As Matt and I scored “Go South” on South Mountain, we imagined that d. boon had died near us and that his spirit remained in the vicinity. We thought we heard some of his urgency in some of our songs. We thought to dedicate our new poetry score to him, just “To d.,” just as Stefene’s poem was dedicated “To J.,” to the Downwinder activist J. Preston Truman. Also, d. boon was a foe to war, who had dedicated much of his fierce songwriting to exposing the cruelty and hypocrisy of U.S. foreign policy. It was not difficult to imagine d. boon grooving to Stefene’s poem, which hints at the drastic psychic cost to all of us inherent in the existence of the atomic bomb.

At our next opportunity to steal a little time from work and life, Matt welcomed me in Los Angeles and drove us south to San Pedro, where we rented a room with the plan to record the basic tracks to “Go South” – his acoustic guitar, my vocals – on his digital 8-track deck. Professional recording studios owned by friends are available to us in three cities, but we chose the spiritual logic of the d. boon connection over clarity of recorded sound. We were up against a few obstacles. The hotel room was littered with soft, white noises. I had to restrain my singing, as we worked deep into the night. And the only sound separation between our two recorded tracks was the width of a modest hotel room. But, still, our work that night became the skeleton of this score.

Before we left San Pedro, we looked up Richard Derrick. Derrick Bostrom (the similarity of their names is a coincidence) had introduced us to him. He was a bassist who had roomed with d. boon and released some old jams they did together before d. boon died. Richard took us on a windshield tour of San Pedro locations with some importance to d. boon – their high school, the house where they lived together, the Jack in the Box where d. boon used to stuff entire bags full of fries for his friends. And Richard absorbed the concept of a poetry score, a long poem scored as if it were a film. At his mother’s house, he made copies of several bodies of recording he had done many years before, when The Meat Puppets and The Minutemen were young, and he donated them to our project.

This music was not post-punk. I have come to call it post-progressive rock. One of these recordings, called Middle Sleep, sounded just right for several scraps of the poem Matt and I had failed to score. I began to pair Middle Sleep pieces with these fragments. Richard told me Middle Sleep represented his culling of improvisations he did with friends in a house on Lookout Mountain in the Hollywood Hills in the early 1980s. When I told this to Stefene, she was amazed. In the same hills, during the time of The Manhattan Project, The Lookout Mountain Air Force station had covertly operated a studio producing classified films for the U.S. military and The Atomic Energy Commission. Now declassified, these films had inspired specific images in her poem, such as the burning rabbits set on fire by nuclear tests in Nevada, just upwind from where Stefene grew up in Salt Lake City.

From our San Pedro skeleton, Matt and I fleshed out the score, working with two long-time collaborators, Meghan Gohil and Adam Long. Meghan lives just down the road from Lookout Mountain, running Hollywood Recording Studios out of his house, shaded by a mutant lemon tree. Adam operates his own brand of Lookout Mountain studio in Midtown St. Louis, with equal parts audio gear and astronomy equipment. Into that studio stepped Richard Selman, from Alabama, to play mbira; Heidi Dean, to sing like an atomic angel; Dave Melson and Robert Goetz, to play bass. Robert’s friend, Dallas Woodson, to play guitar; Geoffrey Seitz and Christopher Y. Voelker, to play strings; Tim McAvin, to sing like a wheelbarrow packed full of lightning; Stefene, to give voice to her strange lines; and Matt, of course, to play everything else. Then, over a dozen scattered nights, Adam and I compiled all of this (and more) and mixed it all together, with breaks for jugs of Schlafly beer and chicken wings at the lesbian bar.

As for me, I sat in the producer’s chair and tried to keep my ears fresh for the next mix. I distracted myself by reading news reports over the internet. The news sounded an awful lot like “Go South for Animal Index.” I read about the U.S. military flying atomic warheads across this country, in 2007, without knowing it – the missiles were marked down as unarmed when they were uploaded on the wings – and then leaving the bombs on the wings of the airplane, all but unguarded overnight. I read the endless saber-rattling over Iran’s nuclear program. I stared into that abyss. I read about Russia sending out old nuclear bombers on new flights, very possibly armed. I read about Russia’s old doomsday action plan still being active and alarmed – how a nuclear strike on Russian soil, to this very day, would trigger an automatic response designed to wipe out life on Earth, if one man under a mountain were to take the computer’s advice and let the rockets launch. I stared into that burning dawn at the end of time, which could come now, or tomorrow, or not at all. I reckoned Stefene Russell is a crafty one. And the world is, indeed, from the beasts. And it is a beast. And a light does dwell among us. That does not fail.
Posted by Poetry Scores at 4:31 PM