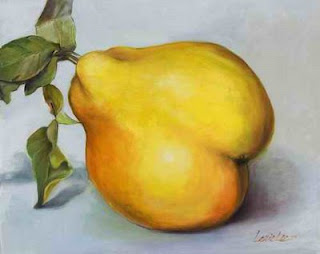 Poetry Scores would like to issue an open invitation to anyone interested in translating a Greek Surrealist poem into a potluck dinner and simultaneous recording session for the poetry score to Phantom of the Dreams’ Origin.


The potluck & recording session will be held at the home of Poetry Scores actor and barbecue curator Roland Franks, 4750 Michigan Ave. (between Itaska and Delor). It will be held 3-8 p.m. Sunday, July 15.

Here is what we'll ask that you do: Commit to bringing a dish prepared from ingredients listed in the poem (see list below). If you don’t wish to prepare a dish in advance, there are many meats and fish named in the poem, so you can always bring something and let Roland curate it on his barbecue. Smoked meat and fish is possible; any meaties and fishies can coordinate in advance with the barbecue curator.


While we are eating our poetry potluck, Poetry Scores will run a recording session for voice in the basement. As you arrive at the party, check in with the production manager (person with clipboard); we will get you on the schedule. When it’s your turn, we will ask you to read some lines in the poem surrounding the mention of your ingredient(s). Depending on the character of your voice, we may have additional reading assignments for you.


Co-producers Chris King and Stefene Russell will speak with you in advance about what is expected of your performance (mostly, we want straightforward readings where the poetry is allowed to speak for itself in the character of your voice). Roy Kasten, of our longtime partner KDHX Community Media, will record the session.


Poetry Scores has commissioned the modern composer Barbara Harbach to score Phantom of the Dreams’ Origin. We will work with Barbara in how the voices are used in the poetry score. We will premiere the Barbara Harbach poetry score on Friday, January 11, 2013 at the Touhill Center for the Performing Arts. We ask all readersto mark that date for a possible live performance of their lines from the poem – depending on our final orchestrations with Barbara.


Phantom of the Dreams’ Origin was written by Andreas Embirikos (1901-1975) and translated from the Greek by Nikos Stabakis of the Athens Surrealist Group. We worked with Stabakis in abbreviating and retitling his (already abbreviated) translation of Embirikos’ collection of prose poems Blast Furnace (1935), which is recognized as the first and most important Surrealist text in Greek.


In these poems, Embirikos takes us on a phantasmagoric journey through a wide expanse of consciousness and experience. Along the way, like Adam naming the world or a chef drawing up orders for his meat and produce purveyors, Embirikos name-checks a savory list of ingredients for a feast. We have taken these ingredients out of the chronology of the poem to group them with an eye towards a menu.


Sorry, vegetarians; the poem seems to include no veggies. You are free, of course, to read Phantom of the Dreams' Origin on the PoetryScores blog and look for an edible way to interpret any language in the poem that appeals to you.


If you’d like to play with us, then RSVP to Chris King, creative director of Poetry Scores, at brodog@hotmail.com. We’ll want to know what ingredients you are working with, whether you’ll have anything you need smoked by the barbecue curator, and we’ll want to hear your speaking voice, even if we already have heard it. Participants are limited to 50. Thanks!


The image is of the painting “The Mighty Quince” by Leslie Lee, leslieleeart.blogspot.com.
Posted by Poetry Scores at 11:49 AM No comments: 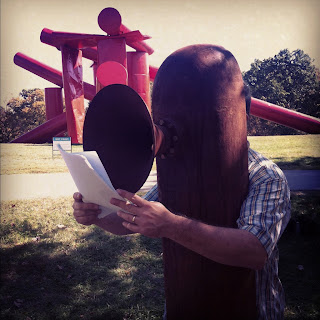 Poetry Scores will continue with its 2012 Readings at The Royale series 7-9 p.m. Wednesday, June 13 with "Four Poets, a Songster, Wm. Stage & a Sculpture".

The reading will be held in the courtyard of The Royale, 3132 South Kingshighway. The event is free; The Royale is a full-service bar and restaurant.

Performers for the night will be poets Chris King, Nicky Rainey, Stefene Russell and Brett Underwood. The songster will be Robert Goetz, performing his poetry scores of Hawaiian poet Wayne Westlake and a Modoc Indian text. Wm. Stage will read a story from his new collection Not Waving Drowning. All readers will perform at — and, at some point, through — Noah Kirby's sculpture With Solid Stance and Stable Sound.

The inaugural Readings at The Royale event (which also featured Poetry Scores regulars King, Russell and Underwood) was reviewed with delight by Walrus Publishing. "The event," writes Jaime Kelley for Walrus, "had the distinctive flair of mixing artistic media right before our eyes."

Since Poetry Scores translates poetry into other media, Kelley got exactly what we were putting out. Kelley also gave vivid snapshots of the readers we will see again at The Royale on June 13.

Kelley described as Chris King as a "royal court jester" and said "I enjoyed his edgy humor, his biting words, and his off-color topics. He cut through the haze."

Of Stefene Russell:  "Like eating key lime pie, her poems surprised and captivated in a tangy, zesty way. Stimulating and provocative, her images endure."

Of Brett Underwood: "He jumped behind the sculpture and gave us a taste of resounding stable sound. Like drinking a shot of tequila at the end of the night – when you don’t want to go home, not quite – Underwood’s poems went down fast and I felt them."

As for Nicky Rainey, who is new to the Readings at The Royale series, she makes zines, writes grants, stories and letters to her pen-pals. She represented St. Louis in the National Poetry Slam 2009. (Read her prose poem "Where Leo is now.")

The songster Robert Goetz is better known as a visual artist, though he has contributed musicianship to two poetry scores and two songs to the poetry score to The Sydney Highrise Variations. Here is a snapshot of him as songster performing at The New Monastic Workshop:


Every song he sang was a hate song. I remember a line about "prehistoric hate" and another about "small fish, small hearts all around." The astonishing thing was the bounce and joy — swagger, even — of the songs. It was a tricky way to communicate hate. It almost managed to sell hate as something that would be pleasant to hum, what with the buoyant bounce of Robert's guitar chordings and the confident, melodic ease of his vocal, singing about the self-hatred of swimming in a circle.

Stage is a veteran writer who will read one of the eight short stories from his first collection of short fiction, Not Waving Drowing. St. Louis Magazine had this to say about Stage's short stories:


If you’d guess that there are "squishy" things in this collection, you would be correct. This is not a book for the squeamish. The first story begins with a process server urinating in an alley and the last story ends with an utterly guiltless murderer fussing over the sudden need to develop a drawl if he is going to succeed as a fugitive in South Carolina. This is true to form for Stage, who first roughed out his prose style and instinct for stories writing things like the “Mississippi Mud” column for the Ray Hartmann-era Riverfront Times. Stage is gritty and scruffy—without apology, but also without fetishizing his grit. It comes naturally to him as skin.

Noah Kirby's sculpture With Solid Stance and Stable Sound entered the Poetry Scores fold through Dana Turkovic's inspired The Platforms series at Laumeier Sculpture Park. The sculpture recently got off the road with Noah and will be rejoining its temporary home at The Royale for the June event. Poetry Scores is curating the piece in 2012 with hopes of acquiring the sculpture as the permanent fixture of a Poetry Scores reading series.

For information about this event, email brodog@hotmail.com.

Also, coming 7-9 p.m. Monday, July 16: "Readings at The Royale: Poems and Songs of Bombs and Monsters" scheduled for the anniversary of the Trinity Test.
**

"Tranquility did not exist" by Hunter Brumfield III 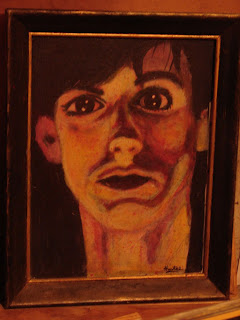 This is "Tranquility did not exist" by the late Hunter Brumfield III. It's the first piece entered in the show for the Poetry Scores Art Invitational to Phantom of the dreams' origin. That event isn't until Nov. 9 at Mad Art, but this painting was in my collection and I was anxious to find a title for it in Greek Surrealism's first masterpiece.

I very recently acquired the painting, originally executed as a portrait of the American rock star Iggy Pop, from my good friend Fred Friction. In fact, Fred just sold me the painting at the previous Poetry Scores show.

Fred owns a print by Hunter that Poetry Scores just put in its spring Art Invitational to Wole Soyinka. As a courtesy, Schlafly donates a few cases of its delicious beer for Poetry Scores art shows so we can thank our contributing artists with a couple of drink tickets . When I asked Fred if we could hang his Hunter print at Mad Art, I offered him Hunter's two drink tickets if Fred took me up on the offer. After all, Hunter is dead and not drinking.

Fred arrived for that show with his typical grand entrance. He was playing art collector and maven to the hilt. Before I could even slip him his dead friend's drink tickets, Fred was trying to move a new piece by this artist in his collection, Hunter Brumfield III. Fred already had written out a bill of sale for the painting. This bill of sale is now in the document collection of The Skuntry Museum, and I seem to have paid Hunter a small sum, posthumously, for his paints, cigarettes and whiskey.

Fred Friction has been outsmarting me outsmarting him for a very long time. If I can give Fred Hunter's free beer, then I can pay Fred for the whiskey Hunter enjoyed while making this portrait of Iggy. I got it.

But how did we get from a portrait of Iggy Pop to "Tranquility did not exist" as a statement on a Greek Surrealist poem?

The translation between poem and visual art in a Poetry Scores Art Invitational can work in many ways. One I really like is reading the poem with an existing work of art in mind and sight, and then trying to find the art and its impulses in the poetry.

I had a terrific time reading Nikos Stabakis' brilliant English translation of Phantom of the dreams' origin while thinking of and looking at Hunter's painting, and of course a haunted portrait of a queerly insistent and slightly crooked young man was everywhere in a poem like that. I wanted Fred in on this title thing. I popped him an email.

I have been reading the poem we are doing next and have narrowed down possible titles for Hunter's "Iggy" portrait:

Do you have a preference?


Fred got right back to me.


My preference would be "Tranquility Did Not Exist" because I think it fairly describes both artist and subject.

So that was that. 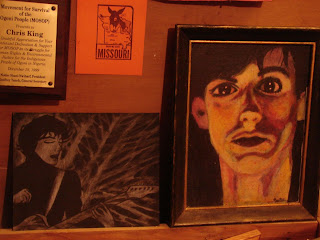 Here is the piece as presently curated into The Skuntry Museum. I have it situated with a portrait of Sunyatta by Colin Michael Shaw, gift of the artist.