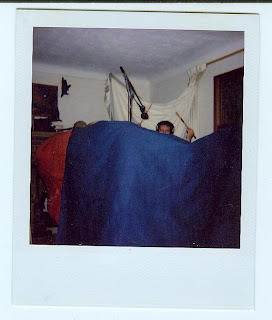 On Monday the Three Fried Men working group in St. Louis that is tending to the poetry score for The Sydney Highrise Variations by Les Murray welcomed into the fold two musicians: Anne Tkach on drums and Tim McAvin on lead guitar and vocals (and, eventually, organ).

My principal songwriting partner, Matt Fuller, is a drummer, and a very good one, so I am hard to please on drums. Matt lives in Los Angeles, so we have no choice but to find a local option if we want a local working group. The original Three Fried Men used the great jazz drummer Billy Teague, but Billy moved to Tennessee.

When I moved back home to St. Louis from New York, I started a new version of the band for one reason only - I saw my old friend Hunter Brumfield jump up onstage at a Nadine reunion show (where the drummer was late) and play perfectly tasteful rock drums, much to my surprise (I knew the guy as a rapper). But then Hunter killed himself.

I next asked David A.N. Jackson to replace Hunter on drums, and David is a magician - but, unlike the rest of us, he makes a living off of his art, and I really don't want to assume the burden of trying to make money playing original music in St. Louis.

So Three Fried Men went dormant. And then Bad Folk broke up.

Most people in the St. Louis scene would understand this to be a bad thing, and I am not rejoicing at someone else's loss. However, I have heard Tim Rakel's new project with Brien, The Mayday Orchestra, and it's the best thing he has been a part of (to my ears). And, then, there is the phenomenon of Anne Tkach, suddenly being a little more available to play in another band (for example ... mine!) - which is, to me, a very great thing.

She fit in perfectly and instantly. Immediately, we recognized we would be able to put together a set of songs from the Sydney Highrise score by Wednesday, February 18, when Michael Friedman will be in town (venue to be determined; Anne's other other band, Rough Shop, also on the bill and backing up Michael).

Coproducer, audio engineer for the working group, bassist and sideways-at-the-omnidirectional-mic vocalist Robert Goetz showed me how to upload mp3s to be shared; so, by golly, here are our first roughs from our first session with Anne (and Tim; except he and I were born joined at the musical hip; another story).

* In the land of veneers
(lyrics by Les Murray, music by Matt Fuller and Chris King)

No duh, but like, uh, click on the titles to hear the mp3s. These are rough mixes of rough sketches, but we were satisfied - especially for a first rehearsal.

The image is of Matt Fuller tracking drums in the living room of the late Pops Farrar's old house, working on the Eleanor Roosevelt record Water, Bread & Beer which (gasp) we actually plan to finish this year, too. Note sophisticated sound separation of drums!
Posted by Poetry Scores at 4:51 AM

All right!! Excellent use of the mp3 in blog. What's
next....dare I say TALKING MOVING PICTURES.

Matt - apologies in advance for brutalizing your guitar parts...