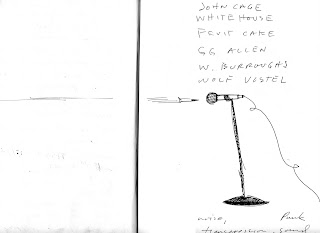 Since we have been scoring poems, the idea was to alternate each year between an international poet and a poet from the U.S., with favoritism towards local poets when we go domestic, and so far we have stayed on schedule: Leo Connellan, Crossing America (U.S.); Ece Ayhan, Blind Cat Black (Turkey); Stefene Russell, Go South for Animal Index (U.S. - St. Louis); and now Les Murray, The Sydney Highrise Variations (Australia).

That means, after Les, we should turn back to the U.S. and come all the way back home if we can; and, in fact, next in our sights, hopefully for 2010, is Jack Ruby's America by the St. Louis poet David Clewell, published by the local Garlic Press.

Quite a bit of work has been done toward that score already. Years ago, Roy Kasten and I recorded Clewell reading the poem. I then had Clewell annotate a copy, suggesting places that would be rich for orchestration and even bracketing potential titles for the musical interludes. I plan to follow his suggestions unless they make no sense at all, because he took the time to make them, and because we have never done that before - never involved the poet in the process of the score, unless you count recording Les Murray's bizarre mouth music, his personal translation of his poem into sound, which we will use in the Sydney Highrise Score.

I have also searched intermittently for examples of music performed at Ruby's Carousel Club, a Dallas burlesque joint where it all came off. Kevin Belford, another St. Louis Ruby junkie, has provided me with good stuff to work from. My coproducer Lij and I once were set to go to Dallas to recruit a jazz band there, for versimilitude and fun, an idea that put us in contact with a Dallas bluesman named Joe Jonas, who actually played bongoes at Ruby's club when he was a teenager.

More recently, Eric Markowitz (who did so much good work on Crossing America) sent me a CD by his new working jazz band in San Francisco, 8 Legged Monster, which plays with the seamy intensity of a Charles Mingus workshop - and now gets my vote for the jazz portions of the score, provided they are willing to arrange some old burlesque tunes for the occasion.

I also have pored through about a dozen discs from the vast Another Umbrella archive and set aside more than enough rock improvisations that suggest the brooding headache of a stripclub owner working himself up to killing the man who killed the president, and the air of paranoia that continues to surround these distant events that went down in Dallas.

Last night, another breakthrough: one of my coproducers Robert Goetz and I did a wonderfully productive Sydney Highrise session with longterm collaborater Dave Melson, who has played bass on every poetry score thus far (and with bands that date back, with me, to the late 1980s) and who looks destined for some acoustic guitar and vocals credit on the new project as well.

During a break in the action, Goetz was razzing me, the newly hyperactive blogger, for once dismissing the fact that he has a blog (many of my blogger friends share this irritating experience) - two blogs, in fact - and he showed us his Nosey Parker blog that documents the performance art (pretentious term for a collaboration that is anything but) with Brett Williams.

He played us some audio art they made from the sounds of gunfire. The sounds of gunfire? Hello? Would there be a Jack Ruby's America had there never been gunfire in Dallas? I swooped right in, on the spot, and acquired tentative rights to provisionally retitle their piece Animal Hospital and use it on the score.

Goetz and I have now moved into copping technical ideas from each other's blogs, so note that I am linking to (something Goetz learned from me) some place where he has posted up that audio (something I will next try to learn from him). It's quite peaceful and beautiful, actually. Their processing and sculpting of the sounds of gunfire has removed all of its menace.
If Another Umbrella - a couple of guys having fun with guitars and keyboards in Los Angeles - will provide the noir elements of the score, including the crescendo to violence, I wouldn't be surprised if men actually discharging firearms doesn't provide the soundtrack for some of the good days, and there were good days for Jack Ruby, days of taking care of your dancers and taking care of the cops, making sure every last stiff on the beat has a chicken salad sandwich today.

The image is from Nosey Parker, reminding themselves of the importance of guns to art.
Posted by Poetry Scores at 3:28 AM