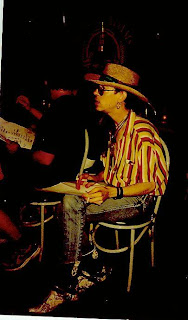 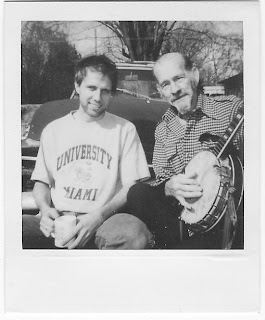 Fred's is one of many voices in the rabble of a choir doing background vocals to "The Apple Country" on Crossing America by Leo Connellan. Here is the section of Leo's poem we scored:
XX

The apple country when
Sunday smelled of our taste buds,
our loneliness rattled in freight
eluding irises of law men, north
to apple picking and then to pick vines.
There is nothing so wrong as steel bars
on wide open land like daggers in
innocence, a life of jails, camaraderie
with sheriffs tolerantly turning the key
on our weekends because we were not
prison time, but to be yanked out of sight
once our power was in tavern cash registers
and out anguish blew up in the drink.
Staggering behind Sally Tambourines
down your main street. All you saw
was your flag, never the wrecks of men
who were broken in your service or
shook Mamma loose, scattered in
Father dictum “if you do this
you are on your own.”
Now, here is the poet Leo Connellan reading it (recorded in the basement of Curbstone Press, one of his last publishers, in funky Willimantic, Connecticut).

And here is our musical response to this part of the poem, "The Apple Country." I'll have to admit it's not the most amazing stand-alone piece of music we have ever made, but it provides a nice departure in the middle of the long journey of the score, and I like that we arranged it as a worksong to fit the subject matter of seasonal, migrant labor. Call it imitative form, if you will.

There also is quite a bit of music history packed into this tiny snippet of sound. Banging on the piano (with chains draped across the strings) and leading the worksong is jump blues legend Rosco Gordon, the progenitor of ska and reggae. Rosco grew up outside of Memphis and did farm work as a young man, learning and singing the field hollers that formed one of the raw ingredients of the blues - which is why I asked him to sing this piece.

He did it as a favor, but he made a face when I mentioned his past life experiences that made me think of him in this context. I think of field hollers and worksongs in terms of musicology and folklore. This stuff reminded Rosco of racism, long days, backbreaking labor and, ultimately, slavery.

Lij and I recorded Rosco singing and banging the piano in the apartment of Lij's brother, the jazz pianist Nate Shaw, in Williamsburg, Brooklyn (just then enjoying the beginning of its hipster revival). We recorded the rabble of a background chorus in Pops Farrar's house on the outskirts of Belleville, Illinois, and Pops' old sad sailor voice is in there somewhere, along with Fred, Lij, Matt Fuller, and myself.

It's a small category of people who fully appreciate Rosco Gordon, Pops Farrar, and Fred Friction - all three of them - but those of us in that tiny category have to cherish this ungainly little piece of music.

If you also have heard and dig the call-and-response singing of the pygmies of the Congo rainforest, as Lij and I have and do, then you may also discern a thoroughly unexpected and unintended parallel in the way our voices come unglued at the end of "The Apple Country." Pops called his spread The Belleville Rainforest, so you could call our chorus The Pygmies of the Belleville Rainforest - and drunken pygmies, at that.
The Crossing America CD is still in print and available in various independent shops in St. Louis and through us directly.

The image of Fred has me in the background. We are in the old Cicero's Basement Bar, preparing for the first-ever Three Fried Men gig, which featured Fred on spoons (you can see the set list in my hand if you double-click on the image to enlarge it). My Polaroid of Pops and Lij was taken during the multi-day session when we tracked these backing vocals and, in fact, finished Crossing America.
*
Also in this series:
Fred Friction sings "Cheyenne" w/ Three Fried Men
Posted by Poetry Scores at 3:25 PM

Here is more detail in that photo:

You also can look at the actual thing at the Museum some day.

I guess blogspot only lets the first photo uploaded of multiple uploads on one post to be cliackable and make-biggable: good to know.