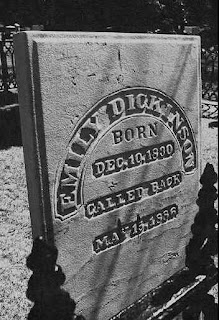 The poem we are scoring for our 2009 release on CD is The Sydney Highrise Variations by the Australian poet Les Murray. The first poem we scored and released in 2005 was Crossing America by Leo Connellan. We also intend to score Give: Reimagining Daphne & Apollo by Alice Fulton in the future. In this story, I recollect a 2002 visit I paid to Amhert, Massachusetts, hometown of Emily Dickinson, when I read Les, Leo and Alice to the dead poet in her grave.


"We passed her grave on the way here. You can almost see it out back of the bar, except that car's in the way, and the light from the streetlight is wrong."

We were in a tavern in Amherst, Massachusetts. Perched above an ale, Perro was talking about the grave of Emily Dickinson. He grew up in the country outside of town and studied English literature here at U. Mass., pulling graveside all-nighters with beers, meditating with the poet in preparation for exams.

He dragged me down to the grave after the barman closed the bar. Emily Dickinson lies in a small, humble family plot in the town cemetery. For a time she once lived in a house overlooking what would become her fellow graves. Now, backs of shops and concrete balconies of cheap modern apartments face the graveyard. The cemetery gate that visitors enter - and which we found, in Perro's words, "spookily ajar" at midnight - is accessed near the garbage can of a trendy shop for kids.

"Poet," I addressed Emily Dickinson in her grave, "I don't really know you." Yet I promised to return to read her some poems.

As we exited the spookily ajar gate, we small talked about how easy it would be to rob her small grave. On a night when the air was warm and the ground was soft, you could dig right in and walk off with her bones.

I had foolishly imagined the puritan Amherst that Emily Dickinson knew, a town in black and white, a spectral place, but that morning I strolled a bustling college strip, full of color. Color was also starting to show in the leaves, enjoying spasms of orange on their way to the November earth.

I climbed a hill to the Mead Art Museum on the campus of Amherst College, passing a bird's nest lying on the sidewalk beside a bus stop. "Hope is the thing with feathers," Emily Dickinson wrote, and I thought of dashed hopes, a bird's nest on the ground. But I didn't pick it up for fear of disturbing eggs, not knowing where to place it on the small tree growing there, not knowing what a bird looks for in a home.

Hers was a private terror, still a mystery, that left her a recluse who wrote scraps of poems on bits of baking chocolate wrappers. Our terror since September is public, something in the air like the grit that drifted onto my face for a month after the Twin Towers fell, but I felt Emily had predicted it with that phrase: "Terror - since September."

The sole guard at the Mead Art Museum was a sleepy college kid. She watched me (one of only two visitors) through half her eyes while I studied a crucifixion scene by Mariotto di Nardo painted in the 1420s. It showed Jesus, of course, and Magdalene, and angels catching cups of the savior's blood, and an officious prick of an executioner, but I was struck by a slouching soldier at the edge of the image, just a working stiff pulling his shift, daydreaming of red wine and a warm woman. Calvary, to him, was a job.

If we had dug up Emily's bones at midnight and at 10 a.m. heisted Monet's Morning on the Seine, Giverny from the empty Mead, we could have completed our thieves' trifecta at the campus natural history museum by lugging out the first dinosaur discovery in North America, a rock with fossilized prints that was turned up 40 years before the word "dinosaur" existed to describe it.

In 1802 Pliny Moody plowed it up on his father's farm in nearby South Hadley, and the family used it for a door stop, calling it Noah's Raven, though this very-long-dead animal only walked like a bird and had a bird's feet. It was not, in fact, a prehistoric bird. If Hope is the thing with feathers, this was a hopeless thing.

The Emily Dickinson Homestead in Amherst is the house in which she lived as a young girl, and then again from age 25 into her reclusive years and unto death. She was a poet in this house, though it is a little hard to feel that through the wall-to-wall carpeting and parquet floors. The house has been emptied out by Harvard - actually, by one of its alumni, who bought many of the original furnishings and gave them to his alma mater. This almost makes sense, though.

Emily Dickinson wrote, "I dwell in Possibility," so a house would be the wrong place to seek her, even in her own house, even in her own bed, which the Homestead still possesses, a tiny bed for a tiny body covered with one of the poet's own shawls, a paisley - more color splashed on the black-and-whites of my mind.

A mind blown to learn that Emily Dickinson had flame-red hair! You can even see that red hair in a portrait of the Dickinson children - if you visit Harvard, that is. The Homestead only has a reproduction of it. She looked good as a girl with red hair.

The Homestead's glory, in terms of things, is The White Dress, an ordinary (in its own day) white dress that Emily Dickinson is known to have worn. A disembodied white dress worn by a mysterious dead poet could only develop a cult following, and it has. Alas, the dress has started to fall apart, and now rests safely in storage. Perro and I sized up a reproduction of it. It looked as if Emily had been standing there in her house a moment ago and then gone away, leaving behind her dress, still erect with the poet's posture.

"She was about the size of a Dominican shortstop," I observed.

The 2002 World Series was to begin that night, so baseball was on our minds, as it is, always, anyway. Perro and I choose to see everything we love through the prism of baseball. If you love baseball, anything else you love can be described by the positions on a baseball field and the batting order on a line-up card.

"What position does she play?" Perro asked of Emily.

A friend of ours had drafted Emily Dickinson for his verseball team.

"She plays first base," I said. "Though she's not doing too well."

"No wonder!" Perro said. "First base? Fool!" He mimed getting on the field radio with our friend, and then barked: "Look, man, we're in the house, and we're looking at the dress, and this is not a first baseman!"

Walking back through town, on our way to a country bar to watch the first game of the World Series, we continued to discuss Emily Dickinson's merits as a middle infielder.

"I pictured her standing deep," Perro said, thinking of the reproduction white dress, "on the balls of her feet ..."

The next morning, with twenty minutes before hotel check-out, I rushed to Emily Dickinson's grave, carrying some books of poems. The gate was ajar, though not especially spookily. The cemetery was agreeably empty.

Unprepared and in a hurry, I had picked out a poem each by a few of my favorite poets, looking for titles that I thought might interest Emily Dickinson as I walked quickly to her family plot. The living, always in such a hurry, with never enough time for the dead.

"This is by my friend, Les Murray," I said to the poet's grave. "He is sort of the unofficial poet laureate of Australia." And I read:

The impress of a whelk
in hard brown rock,

fluted as a plinth.
Its life gone utterly,

a kin boat of fine brick.
Just off centre is a chip

healed before its death.
Before some credit help

maybe even saurid bite
in a swamp Antarctic.

Here, and where you are,
have been Antarctic.
**

"I also wanted to read you a poem by my friend Leo Connellan. If there is a place where all the dead poets go, maybe you've met him. He was the poet laureate of Connecticut when he died last year. Though, actually, he was from Maine."

I only wish I could have it just once more,
you go back and the place looks dull and
small in its mosquito biting green.

I was a Blueberry boy in that childhood,
the sun would flush my freckles out
from where winter hid them in the
sallow pale color of snow and I would
run the meadow for blueberries that
my Aunt Madge would turn into muffins
I have longed for down the tripup of manhood.

Just a minute again, on my knees, picking
frantically with expert watered tongue,
ignorant of what lay out in the woods.
**
"And finally I want to read you a poem by Alice Fulton. I don't really know her, though we have traded e-mails. She is the reason I got interested in you, I suppose. She loves you so much, and I love her."

If you believe you would have caressed every lash
and freckle that I was
but for decorum, I appreciate the thought.
Have you ever been embarrassed
by a frugal kiss? It is embarrassing to live.

My love for my husband was all balled up
with mothering. I had compassion for any flesh
trying that hard to be iron. Imagine
living with his bluster and hiss
for forty years. Have you ever been embarrassed
by a frugal kiss? I died of it. Just say I sublimed.
Snowflakes do this all the time. Say I was tired
of eating beige, for heaven's sake. Of
molestations imposed by my own body.
Let's see. I wasn't stoical enough for me.

You might say I've eased into the trees
and the autistic fields: eyes like forget-me-
nots. "Desire." All that business you admire.
The human yen for angels is depraved.
It decorates death with heaven, longing
for the note I never left.

My last sound was like the small release
of strings and frets you sense
when a guitarist changes chords.
Enough to let you know the music's made by hand.

I am not without regrets,
picayune as they may seem or plain
grotesque. I do regret the writhing.
I wanted to be self-reliant.
I wanted to reach up and shut
my own eyes just before I died.
**
I marked the margins of these three poems with a little "e" to remind myself I had read them to Emily Dickinson in her grave. Not that she was listening there any more than she would be listening anywhere else. Like most of the gestures of the living toward the dead, this was done for the benefit of the one still alive. Emily Dickinson herself is not to be sought in her grave any more than in her house, or anywhere in Amherst, or anywhere on earth. She dwells in Possibility. I have also paid a visit there.

*
Grave image from an Australian website of poetry.
Posted by Poetry Scores at 1:21 PM