Eric Markowitz is gone and not coming back 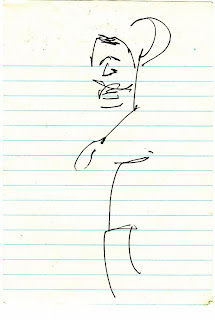 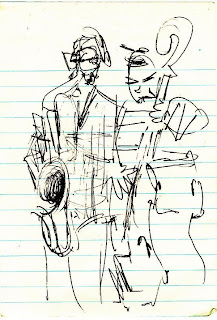 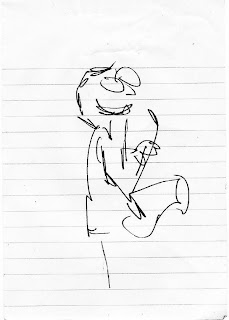 When an artist of any kind moves away from St. Louis to a larger city with a better developed scene or industry for whatever they are trying to do, anything can happen.

Of course, they can blow up and make the move pay off. They can also disappear on the new scene and get stranded there, without the comforts of home or the benefits of the more developed industry.

Frankly, I worry for folks when they move away. I fear it won't pay off for them, yet they won't have the right frame of mind to come back home, as if it's shameful to return in anything other than glory.

It's been many years now since jazz bassist Eric Markowitz moved away from St. Louis and his regular gig with saxophonist Dave Stone. He moved to San Francisco, which he rightly expected to have a more swinging jazz scene (among many other things to recommend it). Eric isn't from St. Louis, he is from New Jersey, but he really discovered the music here, when he and Dave and Pablo Also used to go over to legendary drummer Joe Charles' house and woodshed.

Really, they learned the faith, from Joe and from Jimmy Sherrod, both now gone. And then Eric and Dave kept the faith, together. Leaving that bond must have felt, to Eric, like leaving home, and it must have left a void for Dave Stone, too. (I made these sketches of them playing together at Cafe Mangia, years ago, before Eric split.)

I have kept in touch with Eric fairly well, over the years. He is a candid guy, so I knew the music was going well for him because he told me it was. (Big boost, for him: that he moved with a job transfer - that he didn't suddenly adopt the imperative to earn a living by playing jazz bass, which is a bad idea in almost every city on Earth.)

Yesterday, I was greeted in the mail with really vivid evidence of just how well things are going for Eric in the San Francisco jazz scene, and why it was worth his while to leave the faith with Dave here to play with the guys out there.

I have now, and will often listen to, a trio recording Eric did with Joe Cohen Trio, and a little big band record he did with 8 Legged Monster (the band actually has 22 legs, assuming all the players on the record have two legs). Both records were recorded live in 2008 and released in 2008, so these are current and accurate snapshots of where Eric is with his music. He is in a beautiful place.

The Joe Cohen Trio, obviously, is a trio, led by an alto sax player (obviously named Joe Cohen). It's tasty stuff characterized by an understatement that I can't get enough of in small-group jazz. 8 Legged Monster is just the opposite: big and hot, with 11 players and a collective gusto I associate with Charles Mingus' bands (and not much of anybody else). The bio says they are striving for "the excitement of densely arranged small group big-band." That's it, right there; the Mingus formula, right there.

I'll be talking to Eric, Joe Cohen, and Mike Irwin-Johnson (the arranger of 8 Legged Monster) about incorporating some of this bold music into future poetry scores. I don't hear it for the 2008 poetry score, The Sydney Highrise Variations, but next we turn to David Clewell's poem Jack Ruby's America, and that score will drip with hot and sleazy jazz, to evoke the atmosphere of Ruby's Carousel Club and its dancing girls.

Eric Markowitz and Dave Stone are no strangers to poetry scores, which is why they are on this blog. They are all over the first poetry score, Crossing America by Leo Connellan (produced by Lij and me). They do two trio songs with Kyle Honeycutt on drums, and one duet; Dave also performs in three other groupings (on one, playing some monstrous clarinet!), and ends the record's musical statements by playing saxophone solo on the road outside Pops Farrar's house, perfectly embodying the soul on the road at the heart of Leo's poem.

If I'm not mistaken (and this is going back at least 13 years), we tracked Eric and Dave's duet track in my apartment at Michigan and Arsenal, when the South Grand renaissance was at ground zero. Their duet, titled "What we white men will pay for in hell," responds to a grueling section of the poem (section XVII) that takes up race in America in a short, brutal vignette. Eric's bowed bass and the grinding of Dave's saxophone do as much to simulate the sound of hell as an entire festival of punk rock bands.

So as not to leave them hell, I'll also remember their trio cuts with Kyle, "Do not be a fool, be aware" and "Liquor's got your lust," both in response to early sections of the poem when Leo describes learning how to steal money off of bartops to keep drinking when you're broke.

Ralph Ellison once said he appreciated Hemingway because his descriptions of bird hunting were so precise it kept him from going hungry when he had nothing to eat and had to take up hunting one winter. I'm not endorsing petty larceny, but if you listen to (or read) Crossing America and pay close attention, then you'll know how to drink when you don't have any money, provided you don't have much of a conscience, either.

Eric, Dave, and Kyle perfectly captured the spirit of the sly, drunken trickster, who slips money off the bar, slips a drink down his throat, and then slips out of the bar, with nobody the wiser.

Eric slipped away from us, too. Not like a thief in the night - just a musician looking for a better set of steady gigs - but I miss him just as much as the drunk misses his money, when he looks up from his boozy reverie to see that his ones, fives, and tens, that were on the bar, right there, last time he looked, are now gone, and not coming back.
Posted by Poetry Scores at 6:03 PM

these sketches are awesome...!