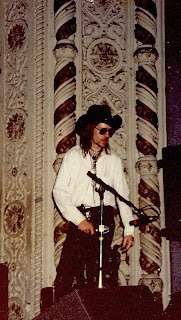 I have been spending some time enthusing on my Confluence City blog about the new Fred Friction debut solo record Jesus Drank Wine, which I consider essential listening, particularly for anyone who ever washed up in this old river down.

The instinct to spread the word about great art made by an old friend gives me the excuse to devote a little series of posts to Fred's contributions to Poetry Scores. He goes back to the beginning with us. He was a sideman with the band Enormous Richard that turned into the band Eleanor Roosevelt that turned into the field recording project Hoobellatoo that turned into the arts org Poetry Scores. He showed interest in our field recording subjects, especially Pops Farrar, and he has sung on two of our poetry scores, including the first one, Crossing America by Leo Connellan.

Our double-Grammy-nominated in-house producer Adam Long was still working out of Clayton Studios (where he did Nelly's first recordings with the St. Lunatics) when we were adding the finishing touches to Crossing America. Lij and I coproduced that score, and from our earliest notes on what to do with the poem, we knew we wanted to arrange a couple of the more scrappy bits for country-inflected band songs and recruit some great, growly voices to sing them. We set our sights high, at Fred Friction and Brian Hennemann (who was, at the time, just putting together The Bottle Rockets) - and we got them both.

Adam and I tracked Fred and Brian on the same night - a late night, done afterhours, off the clock (we have never had money to pay for anything). Brian was pretty calm, as usual, no work whatsoever, but Fred was kind of high-maintenance that night. He arrived drunk, promptly put out a cigarette butt on his tongue, barfed in the men's room, and then continued drinking - all before we could get him in the vocal booth for his take. Which he nailed.

I'll give it to you three ways. First, the part of the poem in question:
*
XIII
Now, outside that bus station was Cheyenne, see,
but I didn’t go look. I was young and I’d be
back! What could it be but a city with buildings,
because I was on my way to the Dakotas, where I
never got, and the thing that hurts later is that
I was right there in Cheyenne and didn’t stay
awhile and look around. I never got back there.
The bus we rode into Wyoming that time
when I was young pulled in to the run down part
of town. Even the idea of days-old cellophane
wrapped sandwiches for sale in the dirty old
bus station of cows, revolted us. Somebody hanging
around the station, gawky with a blank face, said
that across the street from the station you could
get a real good steak. I really didn’t believe it,
the place looked gray, but it was one of the best
steaks I ever ate anywhere, right across from the
old Cheyenne, Wyoming bus station.
*
Now, the poet Leo Connellan reading it (in the basement of Curbstone Press, one of his last publishers, in funky Willimantic, Connecticut.

Steve was on loan from Nadine and Seth from Fluid Ounces. We tracked the band and Steve in the old Undertow studio in Downtown St. Louis, and Seth at home in Murfreesboro, Tennessee. We crossed America to record Crossing America!
After the session at Clayton Studios, I remember driving Fred home to somewhere in South St. Louis, near some gigantic cemetery, still drinking (both of us) in the early morning light.
The Crossing America CD is still in print and available in various independent shops in St. Louis and through us directly.
**

Image is of Fred Friction playing spoons onstage with Enormous Richard at the Cabaret Metro in Chicago the night that Operation Desert Storm broke out (January 16, 1991).
Posted by Poetry Scores at 7:56 AM