In David Clewell's dream, Coleman Hawkins, in his new book, and my basement 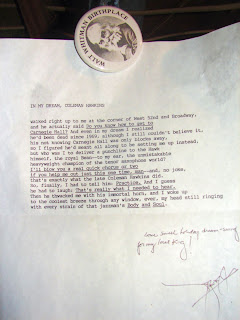 The new David Clewell book is out! It's called Taken Somehow by Surprise, is published by University of Wisconsin Press (which has done right by Clewell), and I will have a lot to say about it.

And then, Clewell is one of ours, here at Poetry Scores. In 2010 we scored his great long poem Jack Ruby's America (CDs still available), our fifth completed poetry score. That poem appeared previously in a Garlic Press limited edition that was botched by bad glue, so Clewell takes another crack at publishing the Ruby piece in this new volume.

Jack Ruby's America concludes Taken Somehow by Surprise, and if you know what is coming in detail (as I do, having set the damn thing to music and curated an art invitational around it), you can see how Clewell, in fact, structured this entire sequence around the Ruby poem.

This really is a major wow of a book; and as I have said, I will have a lot to say about it in this space. For now, I wanted to share a sheaf from the manuscript collection of The Skuntry Museum (which looks a lot like my basement). This is not technically a manuscript, it really is a signed typescript (with a dedication to moi, aka "my local King"); but that's close enough for a rock & roll manuscript collection.

I bring this up now because the Clewell poem I have in autographed typescript, "In My Dream, Coleman Hawkins," appears early in Taken Somehow by Surprise. Double-click on the image above, and you should be able to read the poem. Now, Coleman Hawkins is one of the few artists I love more than I love David Clewell, though truth be told this is not one of my favorite poems in this collection, nor is it particularly representive of the collection. But it is a very good poem, it belongs in this book, and this autographed and dedicated typescript is a prized possession.

About that Walt Whitman Birthplace button, now that you have double-click on the image. I used it to affix the Clewell signed typescript to my Leo tie dangling from the rafters of The Skuntry Museum. What is a Leo tie? The first poem we scored was Crossing America by Leo Connellan (CDs still in print). Leo, sadly, died while we were scoring the poem. I went to the posthumous yard sale and cleaned the widow and his grieving daughter out of Leo's old ties. I then gave a tie to many of the people who worked on the score, and kept one for myself

This poem by Clewell is pinned to my Leo tie by the Walt Whitman Birthplace button. Why? Well, Clewell loves our score to Crossing America and has bought many copies of the CD for gifts to friends. Leo's poem includes a long, tortuted meditation on Whitman. Clewell, too, knows his Whitman and writes like he knows it. Stefene Russell, another poet we have scored (Go South for Animal Index), and a fellow holder of a Leo tie, tells me she knows someone who calls Clewell "Walt Whitman" owing to an alleged physical resemblance.

The Walt Whitman Birthplace, by the way, is located on Long Island. I have visited, and that is where I got the button. The destination is recommended. May the cities of Portland, Maine and New Brunswick, New Jersey, locate and preserve the birthplaces of Leo Connellan and David Clewell!
Posted by Poetry Scores at 10:36 PM No comments: