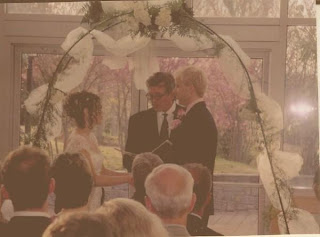 Sorting the archive, I came across a dark picture of the wedding of our core recording engineer Lij to Joy, officiated by Robin Eaton, a great friend of our project and a force for good in rock music. My attempts to brighten the image only made it gauzy, but then I came across my report on the wedding, which made it worth salvaging, gauze and all.

This report from Nashville went out as a mass email to the Poetry Scores folks, but it's very much a proto-blog post. Since the message records some project history, checks a few important names and still has some bearing on the future (such is project lag, in our fragmented universe), I'll share it.

The message uses a little project slang, "core folk" (as opposed to "board member"). Core folks are those who wouldn't sit still for a board meeting or don't live in St. Louis, but who are part of everything we do, if we can help it.

Core guy Matt Fuller should be on a jet plane to L.A. right now, following our attendance at Lij’s wedding and various pieces of work on ongoing projects. His visit was fruitful for Poetry Scores and a hoot to boot.

First, a report on the Lij/Joy nuptials, for those unable to attend.

It was a marvelous ceremony, attended mostly by ragtag musicians with bedheads and in bad suits. Matt and I marvelled how we had never before felt so at home at a wedding or at any official ceremony of any kind. Even the wedding official was a musician (Robin Eaton, co-owner of Alex the Great, the studio where Lij got his start) – and this despite the bride’s father being a Christian missionary!

A healthy roster of poetry score contributors was in attendance. Piano music at the reception was provided by Seth Timbs, of the pop band Fluid Ounces, who plays piano all over Crossing America and on the great jazz instrumental from Blind Cat Black, “The Marching Band of His Friend and of Death.”

A highlight during a lengthy toast session at the reception was the musical skit “Schools and Rules Aren’t for Lij” by the groom’s brother, Nate Shaw, who did magnificent piano work on Crossing America.

And mowing down the Chilean cabernet with the rest of us were Dave Melson, bassist on much of Crossing America, and Warren Pash, author of the Hall & Oates hit “Private Eyes” and sonorous voice over a Tom Hall blues improvisation on Blind Cat Black.

There were also us core folks, Lij, Matt, Heidi Dean, Rick Hawkins, and myself. Folks haven’t heard too much about Rick. He is a photographer who shot the portrait of Leo Connellan on the back of Crossing America and many of the images of Rosco Gordon on the record Lij and I did for him, No Dark In America.

Not that our projects mean much compared to the birth of a family, but I will go on to add that many people approached me at some point during the festivities to say they love what we are doing, hope we do more of it, and want to stay involved. These sorts of thoughts were especially valuable coming from Robin Eaton, whose studio (where we have done much pro-bono work) remains open to us and is pivotal to the Nashville music scene. Robin never fails to tell me how much he adores Poetry Scores.

[It fascinates me that this last bit, filed under a subhead, could stand still stand as a project update today, three years later, since we are only now actually moving this project forward!]

Poetry Scores board member and multimedia dude Robert Goetz got a jump on the rest of us in scoring Les Murray’s The Sydney Highrise Variations. He has very satisfying sketches of two songs covering two different stretches of the poem, “The starving spirit is fed upon the heart” and “Age of piety.”

Robert inspired Matt and I to ransack old worktapes, listening for fragments that might lend themselves to Les’ edgy, angular city poem. We snapped up quite a few bits of the poem, for songs to be titled “Far above the tidal turnaround,” “Docked at apogee,” “England’s buried gulag,” and “End, and mutate, and persist.”

I can also predict that archival things from Middle Sleep and other sources will creep in. I love the idea of the poetry score taking shape at various locations and with various visions like a cityscape going up with no precise master plan.
Posted by Poetry Scores at 4:56 PM