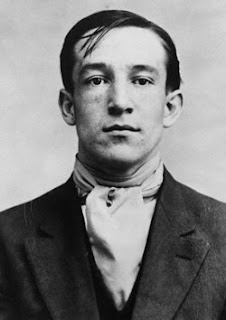 The poetry score we are producing to The Sydney Highrise Variations by Les Murray will include work by at least one new (to us) musician, Frank Heyer.
Frank came to us from Brett Underwood, who had booked him into The Tap Room. When I told Frank I was always on the lookout for source recordings from creative musicians to be integrated into a poetry score - a long poem scored as one scores a film - he was generous enough to send me two compilations of his music.
I really liked it. It's uncanny and difficult to describe, other than to call it atmospheric and experimental, mostly on guitar and a keyboard that sounds like a mournful organ. I expect we'll make much use of it in future scores.
For Sydney Highrise, I have picked out two piece by Frank for instrumental passages, titled "In ambiguous battle at length" and "Modernity's strange anger," which is actually the last phrase in the poem, making this the final piece of the score. I wanted to end on an instrumentalpiece, looking forward to the eventual silent film we'll make to the score, making this a nicely disturbing bed for the credits to roll over.
On the score of the CD, how long listeners stick with this seven-minute dirge improvisation depends on how much of modernity's strange anger they are in the mood for that day, since, believe me, Frank's piece oozes this quality.
"In ambiguous battle at length" also will get very special treatment. When I recorded Les reading the poem (years ago in Long Island City, with a Turkish club deejay as engineer!), I also recorded him reading what he described as "mouth music." It's basically him reading along through his poem and translating it into vocal effects. It's very odd stuff, especially coming from a world-famous poet. (Les' biographer, Peter Alexander, is most eager to hear it.)
Whatever else we do in the score with Les' mouth music, we will use it in its entirety over Frank's guitar improvisation I selected for "In ambiguous battle at length," then bring in Heidi Dean's operatic vocal to do battle with it.
Anyway, that's the idea going in.
For a taste of Frank's wonderful and uncanny music, mated with equally strange images, spend some time on his website.
*
The image is of a Frank Heyer, though not ours. That's Adam "Frank" Heyer, a Chicagoland gangster, who was murdered in the 1929 St. Valentine's Day Massacre.
Posted by Poetry Scores at 2:40 PM

I worked with Frank back in 2005, when I was helping Schlafly with Art Outside ... he was one of the performers, & he was amazing. He actually performed near where Jenna was doing her SCOSAG projects & both kids & adults found him spellbinding. That's rare!