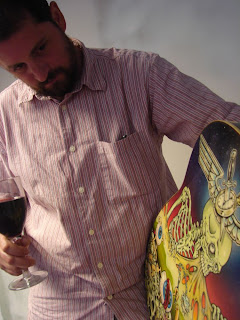 People who wrote songs in collaboration with others, especially long-distance, before the advent of digital recording technology and file-sharing media have memories like mine.

It started with leaving melodies on the answering machines of bandmates. It then progressed through (my favorite phase) receiving guitar tapes in the mail and driving around for months inventing melodies and attaching scraps of lyrics to them. I'm still up for that experience, any time anybody wants to send me a guitar tape, though this blog thing is proving to be a great workshop tool.

Today (Merry Christmas 2008!) I am posting up two songs that are finished and were not written in collaboration. Robert Goetz wrote these on his own when we first started scoring Les Murray's great poem The Sydney Highrise Variations. My gut feeling is that they are done, in their stark simplicity, and will provide two quiet centers to the score. We'll see.

I am posting the recordings here because I can (Goetz showed me my new best friend Box.net), and because Robert and I have assembled a new working group of Three Fried Men that also includes Dave Melson, Tim McAvin and Anne Tkach. Whether or not they add touches to these recordings, they'll need to learn them so we can perform them. And now here they are to be learned! We plan, for the first time, to have a working band that performs songs from the poetry score at gigs, which seems to lead, logically, to including a live set at the CD release party and art invitational next fall (which is about to become this fall; yeek).

I am including the fragments of the poem that Robert scored so you can appreciate his artistry in getting some dense and tricky language to fit a melody simple enough to remember and hum. Achieving that feat is one of my favorite things about scoring a poem. I was ecstatic to get these recordings from Robert and am excited to share them now, even out of context. (The titles are hot links to mp3s.)

The starving spirit is fed upon the heart
(Lyrics by Les Murray, music by Robert Goetz)
clearing bombsites for them. They rose like nouveaux accents
and stilled, for a time, the city's conversation.

Their arrival paralleled
the rise of the Consumers
gazing through themselves
at iconoclasms, wines,
Danish Modern ethics.

Little we could love expanded to fill the spaces
of high glazed prosperity. An extensive city
that had long contained the dimensions of heaven and hell
couldn't manage total awe at the buildings of the Joneses.

Their reign coincided
with an updraft of Ideology,
that mood in which the starving
spirit is fed upon the heart.


*
In the age of piety
(Lyrics by Les Murray, music by Robert Goetz)

It rose out of the Nineteenth, steam pouring from venturi
and every man turning hay with a wooden fork
in the Age of Piety (A.D. or B.C.) wants one
in his nation's airline. And his children dream of living
in a palace of packing crates beside the cargo terminal:
No one will see! Everything will be surprises!

Reading along just now for the first time, I see we need one overdub on "In the age of piety" - someone needs to say or sing the phrase "(A.D. of B.C.)" which remains unscored as of now. I hear a girl's voice in my head ...

word verification of the day: horylit