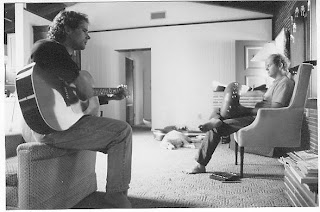 This photograph, taken a number of years ago by Roy Francis Kasten, provides a peek at a seldom-seen core contributor to Poetry Scores, the mbira maker and musician Richard Selman of Leeds, Alabama. Here, Richard is picking out an mbira part to one of my songs (that's me, in my life with hair), though I recall his responding with more flair and imagination to one of Roy's songs, in a moment I seem to have failed to document in any way.

I tend to copy Richard on whatever we are doing, and he always does his best to contribute from his enclave just outside Birmingham, where this picture was taken during a memorable Southern swing. Richard has two pieces on our most recent poetry score, Go South for Animal Index by Stefene Russel: "And the snake continues to bite" and "Unusually deep pits".

Richard's original mbira compositions for the score (much transformed by subsequent overdubs) were recorded by double-Grammy-nominated studio wiz Adam Long, here in St. Louis. Richard was brought to town by our mutual friend, the artist Greg Edmondson, who curated a show of Richard's mbiras (I think I am remembering this right ...) at Thomas Jefferson School.

Richard has donated one of his mbiras, fashioned from a gas can, to The Skuntry Museum. It deserves its own blog post, come to think of it, but right now you can see the mbira on the Museum's never-updated MySpace page.

I am sure there is someone, somewhere, who wouldn't like the looks or even idea of a Southern "white" man like Richard making and playing an instrument that is traditional to Zimbabwe and figures importantly in traditional spirit-possession ceremonies. Those critics would have to blame the traditionalists of Zimbabwe, who welcomed Richard with open eyes and arms and transferred their traditional techniques and concepts to him wholeheartedly. Richard, in turn, received and has preserved those techniques and ideas with utmost respect.

Indeed, were he less of a respectful traditionalist and more of an exploitative opportunist, he'd have a lucrative mbira studio in operation somewhere and enjoy the benefits of a faculty appointment. His fate has been nothing like that whatsoever.

Richard's performance credits include a lengthy stint in Spirit Talk Mbira, a band fronted by the great Chartwell Dutiro, former musical director for the legendary Thomas Mapfumo. I kicked it with Chartwell during one of my other (solo) visits to Leeds. As long as I live, I will never forget the dreadlocked Zimbabwean roots musician searching for the right term for the kind of American music he liked, then finding it, and saying - with impossible-to-replicate Shona/British inflection - "twang".

Richard also has a nonchalant comfort with the mbira's role in spirit possession ceremonies. I have been fortunate to know a number of grounded, working spiritualists, and they are always the least creepy - and the least New Agey - people. Working the spirit, for people who have that gift and have developed it, is just that: work, and hard work at that, and typically poorly paid or volunteer hard work.

I don't hear a part for Richard in our score to The Sydney Highrise Variations, but maybe he will adopt an exctinct species and score one of those poems. We also should see about getting him to St. Louis and into some sessions with local bands. I bet one of those Ray Kasten songs he so enjoyed playing still needs to be recorded. And don't even get me started on Richard's vast archive of field recordings sitting on the Poetry Scores hard drives, waiting for permissions and money.

And spirit.
Posted by Poetry Scores at 11:43 AM