'The power and peace of life's rhythms': In Memory of Julia Foote


Julia Foote was a defining catalyst of what became Poetry Scores. I didn't realize this until she had passed. As one of her eldest son's oldest and best friends, I was included in a long list of people asked to write memories of Julia for her family memorial in Ephraim, Wisconsin. That's how I came to write this memoir of Julia and her impact on my life. Thinking about Julia and writing this, I saw how much she shaped the creative passions that I shared with her son, and to what extent those passions led us to where we are today.

Julia was very recently remembered as an artist in New York, one of her many homes. Lij sent me a snapshot to show how the curator had printed my essay and posted it on the wall as part of the show. That made me think that I should post the essay on our digital wall here. Lij thought that was a great idea, so I share this in memory of Julia. 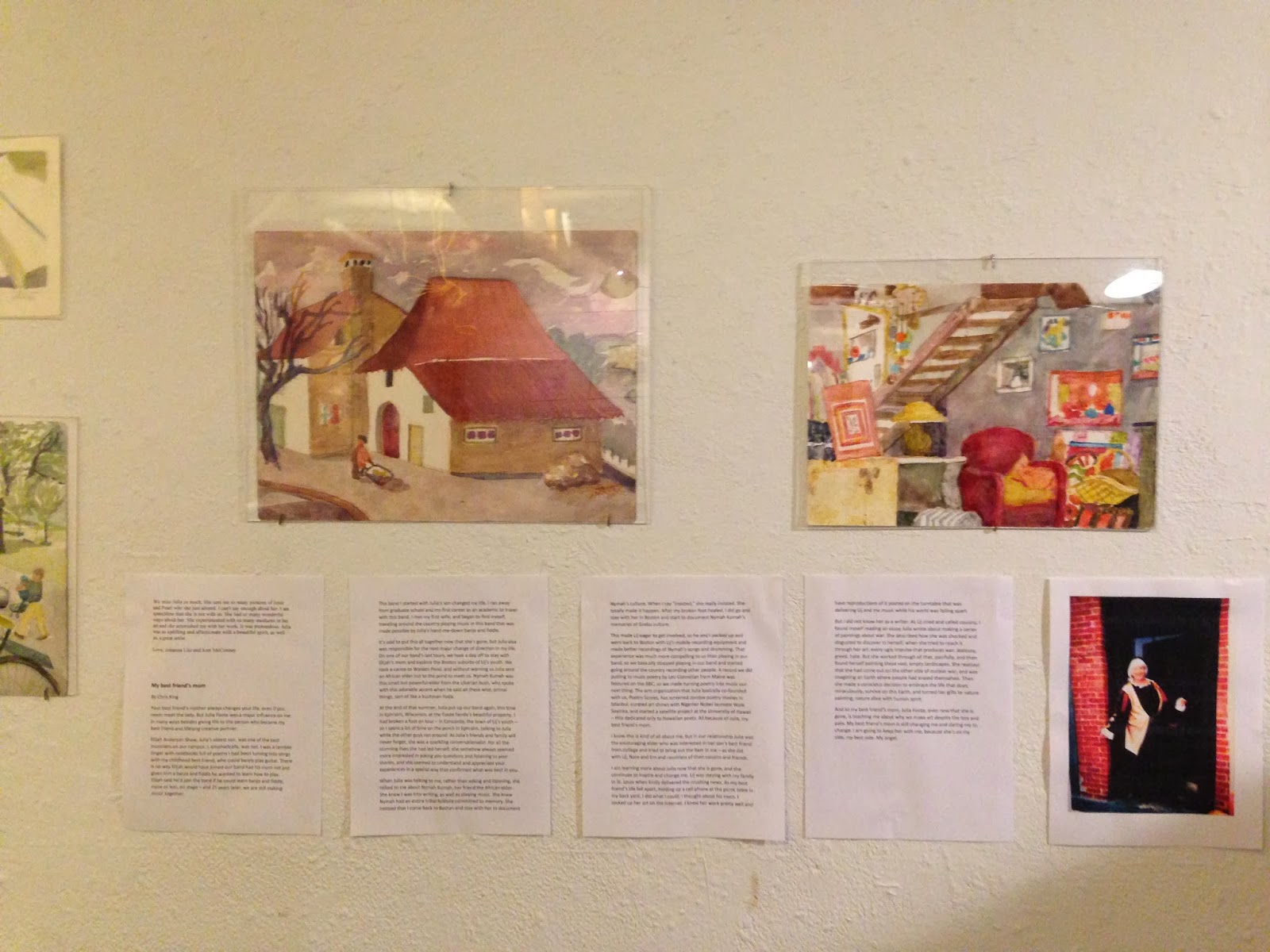 Some of Julia Foote's memorial art show in New York, with my essay posted.
Photo by Lij


Your best friend’s mother always changes your life, even if you never meet the lady. But Julia Foote was a major influence on me in many ways besides giving life to the person who became my best friend and lifelong creative partner.

Elijah Anderson Shaw, Julia’s oldest son, was one of the best musicians on our campus at Washington University. I, emphatically, was not. I was a terrible singer with notebooks full of poems I had been turning into songs with my childhood best friend Skoob, who could barely play guitar. There is no way Elijah would have joined our band had his mom not just given him a banjo and fiddle that he wanted to learn how to play. Elijah said he’d join the band if he could learn banjo and fiddle, more or less, live on stage – and 25 years later, we are still making music together.

This band I started with Julia’s son changed my life. I ran away from graduate school and my first career as a college professor to travel with this band. I met my first wife, and began to find myself, traveling around the country playing music in this band that was made possible by Julia’s hand-me-down banjo and fiddle.

It’s odd to put this all together now that she’s gone, but Julia also was responsible for the next major change of direction in our lives. On one of our band’s last tours, we took a day off to stay with Elijah’s mom and explore the Boston suburbs of Lij’s youth. We took a canoe to Walden Pond, and without warning us Julia sent an African elder out to the pond to meet us. Nymah Kumah was this small but powerful elder from the Liberian bush, who spoke with this adorable accent while saying wise, primal things, sort of like a bushman Yoda.

At the end of that summer, Julia put up our band again, this time in Ephraim, Wisconsin, at the Foote family’s beautiful property. I had broken a foot on tour – in Concorde, the town of Lij’s youth – so I spent a lot of time on the porch in Ephraim, talking to Julia while the other guys ran around the place. As Julia’s friends and family will not forget, she was a sparkling conversationalist. For all the great many stunning lives she had already led herself, she always seemed more interested in asking you piercing questions and listening to your stories, and she seemed to understand and appreciate your experiences in a special way that confirmed what was best in you.

Julia was one of the world's great connectors. She knew I was interested in writing and folklore, as well as playing music. So she wanted to tell me about about Nymah Kumah, her friend the African elder. She knew Nymah had an entire tribal folklore committed to memory. She insisted that I come back to Boston and stay with her to document Nymah’s culture. When I say “insisted,” I mean she really insisted. She totally made it happen. After my broken foot healed, I did go out and stay with her in Boston and start to document Nymah Kumah’s memories of Grebo culture.

This made Lij eager to get involved, so he and I packed up and went back to Boston with Lij’s mobile recording studio. We stayed with Julia in Boston and set up a temporary studio in a Roxbury church to make better recordings of Nymah’s songs and drumming. That experience was much more compelling to us than playing in our band, so we basically stopped playing in our band and started going around the country and recording other people instead.

A record we did setting to music a book of hitchhiking poetry by Leo Connellan from Maine was featured on the BBC, so we decided to make turning poetry into music our next main thing. So I would say Julia basically co-founded the resulting arts organization with us. Poetry Scores moved on from music to add other media to our repertoire, and over ten years we have screened zombie poetry movies in Istanbul, curated art shows with Nigerian Nobel laureate Wole Soyinka, and started a satellite project at the University of Hawaii – Hilo dedicated only to translating Hawaiian poets into other media.

All because of Julia. My best friend’s mom.

I know this story is more about me than Julia, because in our relationship she was the encouraging elder who paid attention to her son’s best friend from college and always tried to bring out the best in me – as she did with Lij, his brother Nate and sister Emily, and countless of their cousins and family friends. I am learning more about Julia herself, now that she is gone, and she continues to inspire and change me.

Lij was staying with my family in St. Louis when Emily called to deliver the crushing news, and as my best friend’s life abruptly fell apart on him, holding up a cell phone sitting at a picnic table in my back yard, I did what I could. I thought about his mom. I looked up her art on the internet. I know her paintings pretty well and have reproductions of several of Julia’s paintings pasted on the turntable that was delivering Lij and me music while his world was falling apart in my backyard.

But I did not know Julia as a writer. While Lij cried and called cousins, I found myself reading online an essay Julia wrote about making a series of paintings about war. She described how she was shocked and disgusted to discover in herself, when she tried to reach it through her painting, every ugly impulse that produces war: jealousy, greed, hatred. But she worked through all of that ugliness, very painfully, and then found herself painting these vast, empty landscapes. She realized that she had come out on the other side of nuclear war in her work, and was imagining an Earth where people had erased themselves. At that point she made a conscious decision to embrace the life that does, miraculously, survive on this Earth, and she turned her gifts to nature painting, to "the power and peace of life's rhythms."

And so my best friend’s mom, Julia Foote, even now that she is gone, is still teaching me about why we make music and art despite all the ugliness, loss and pain. My best friend’s mom is still changing me and daring me to change. I am going to keep her with me, because she’s on my side, my best side. My angel. 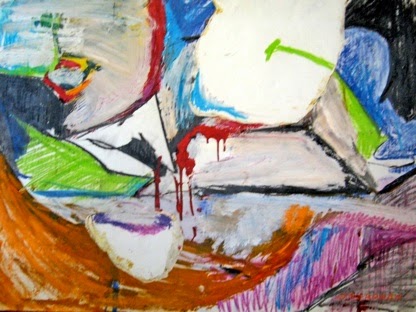 From The War Series by Julia Foote
Posted by Poetry Scores at 12:14 AM No comments:


Gina Dill-Thebeau has produced a gallery of phantom selfies for Poetry Scores.

A phantom selfie is a picture you take of yourself that is, in some way, ghostly or phantasmagoric and titled with a phrase from Andreas Embirikos' poetic sequence Phantom of the Dreams' Origin, translated from the Greek by Nikos Stabakis.

The images are arranged, as in a Poetry Scores art invitational, based on where in the flow of Embirikos' poem the language chosen for the title of the selfie appears. 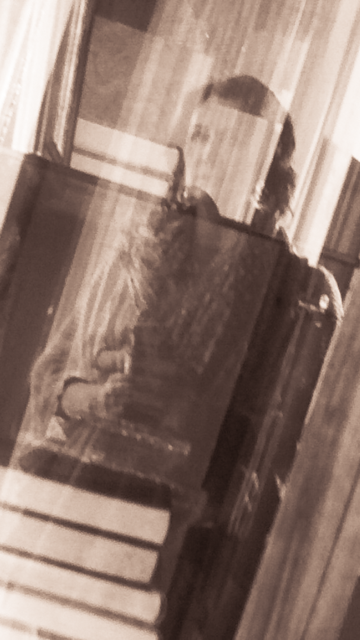 "Phantom of the dreams’ origin"
* 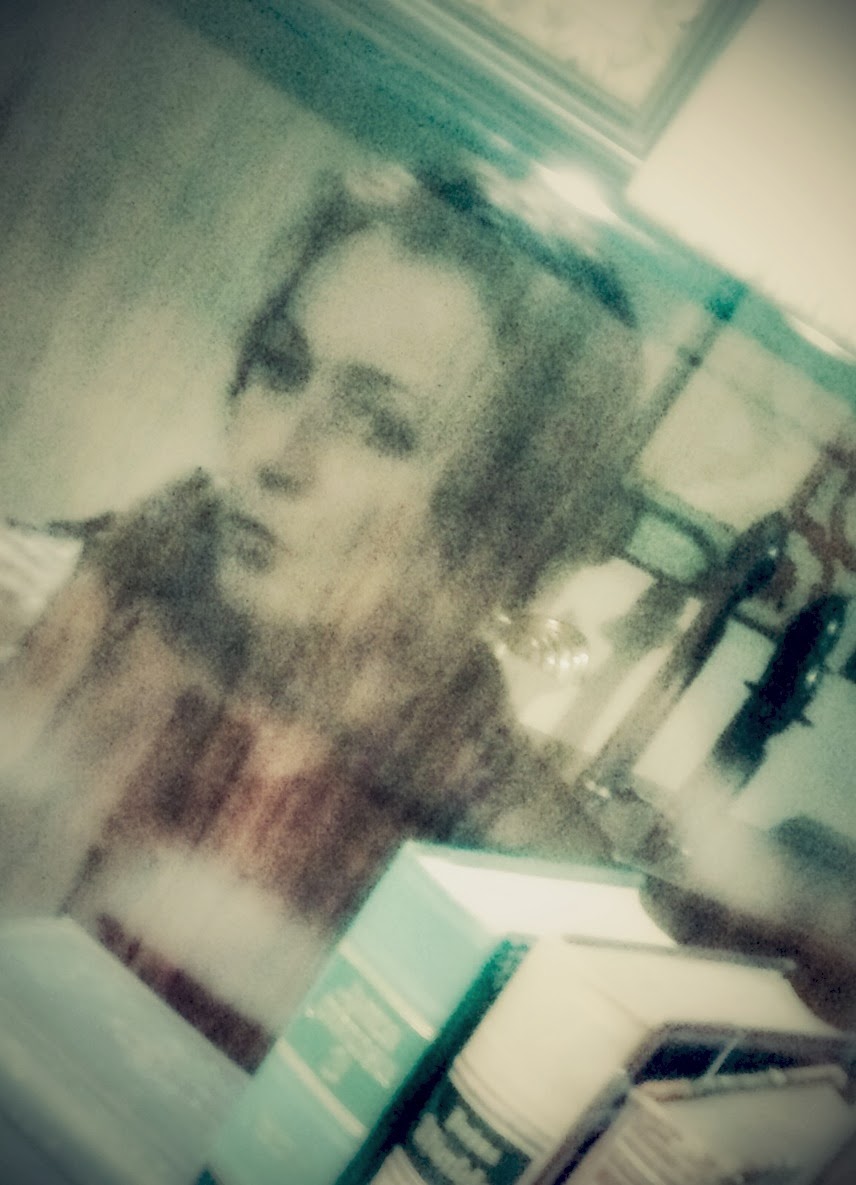 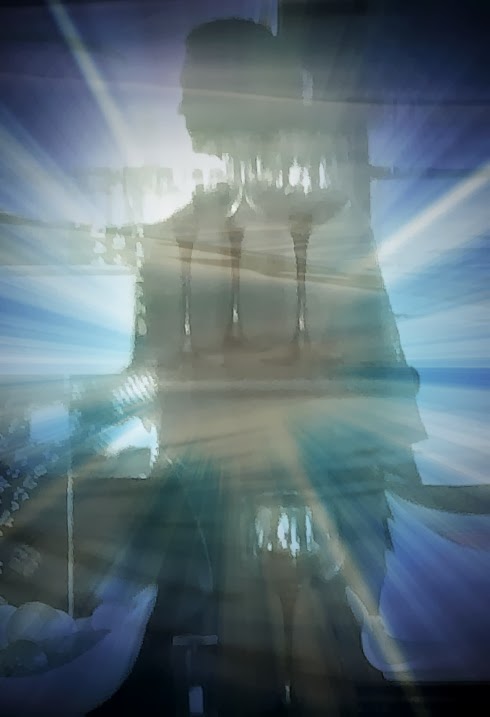 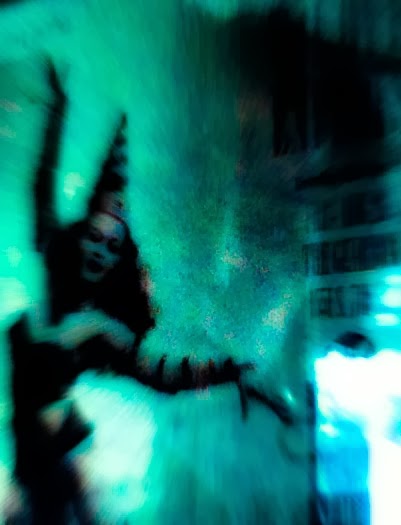 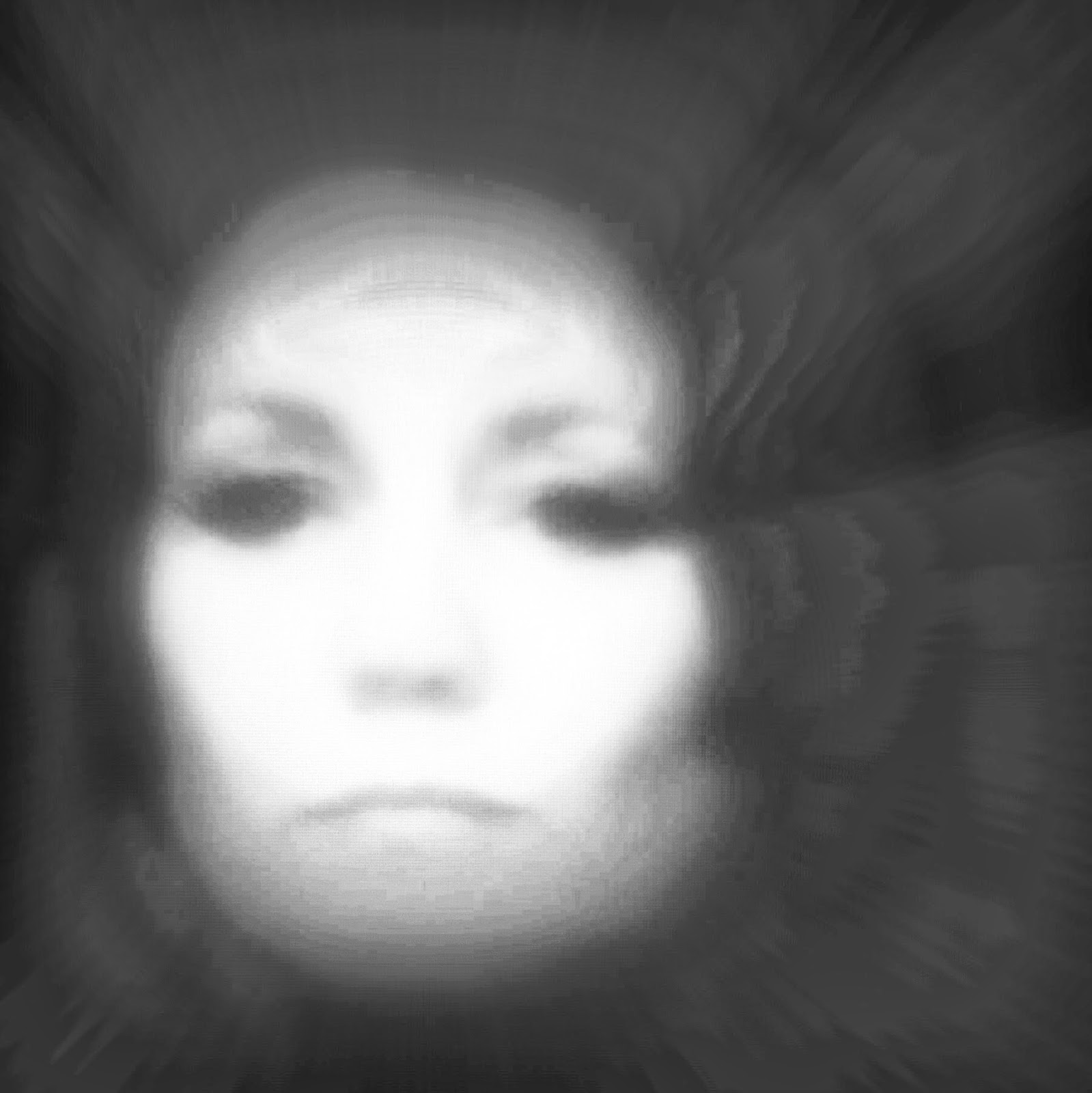 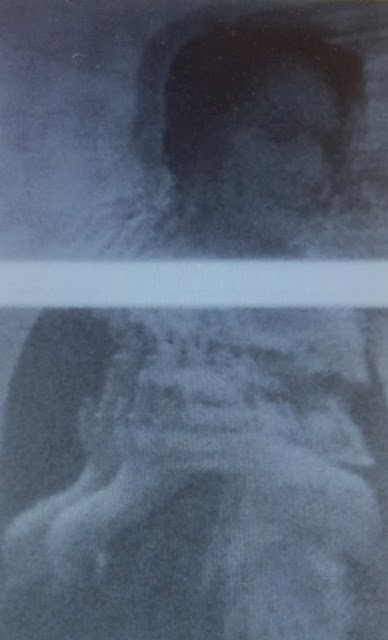 "Seasons change and the woman of our times resembles a wick’s chasm."
* 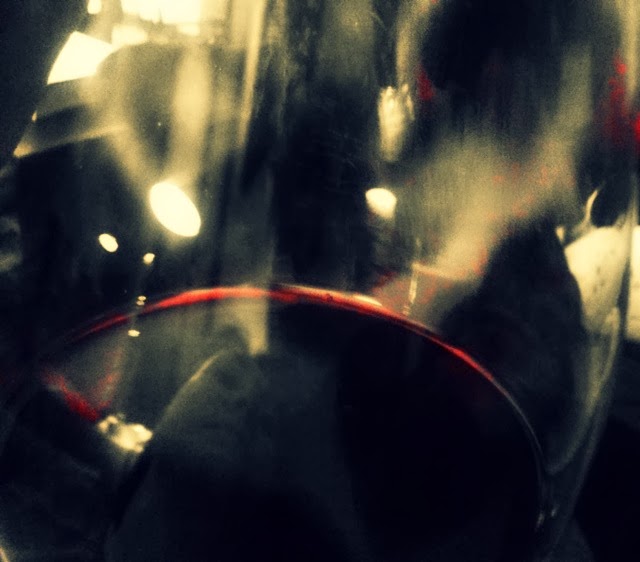 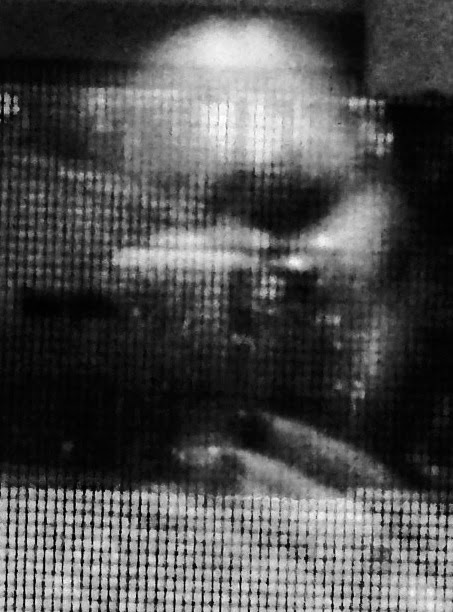 "She was deprived of her toys and her lover."
* 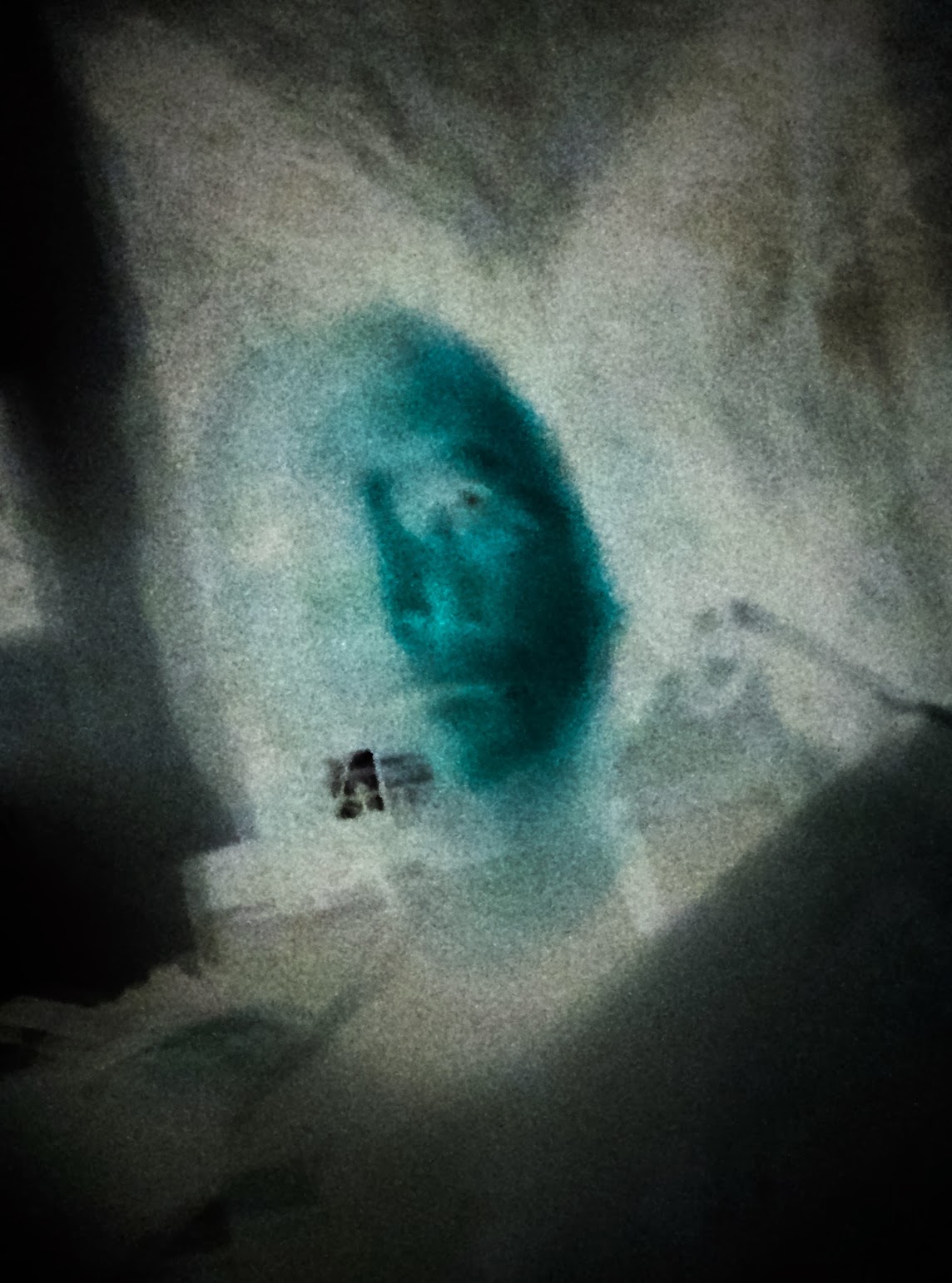 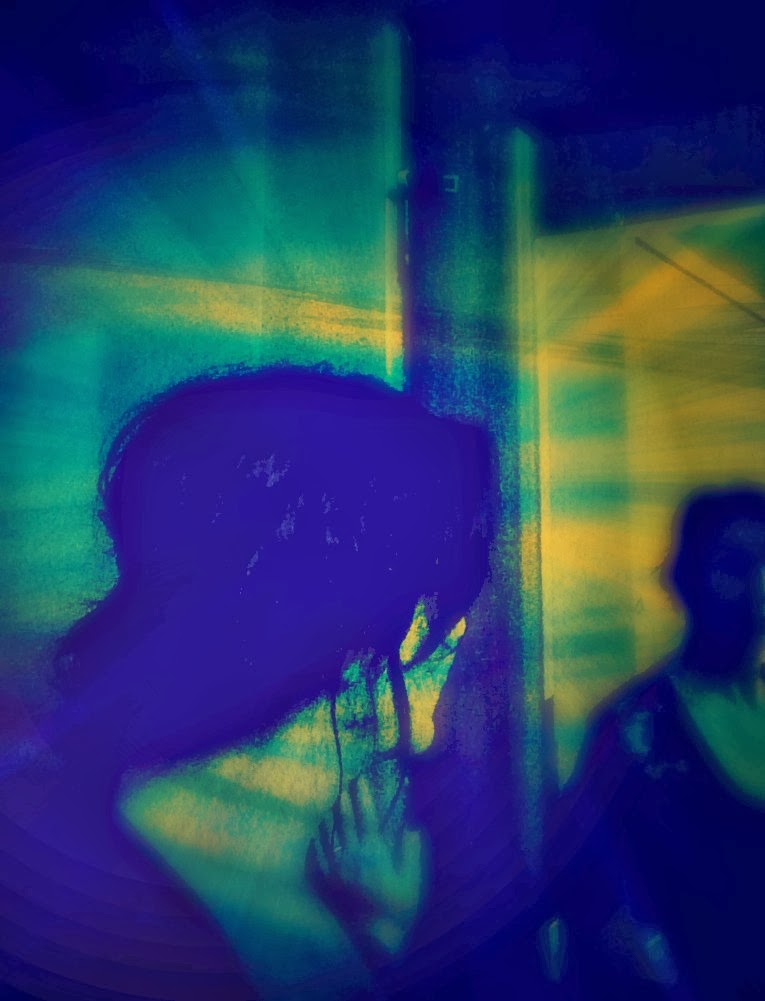 "Terrible are the momentary facts and our desire goes beyond the hourglasses."
* 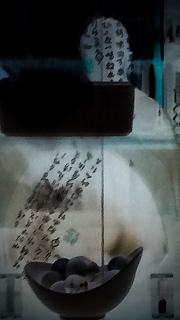 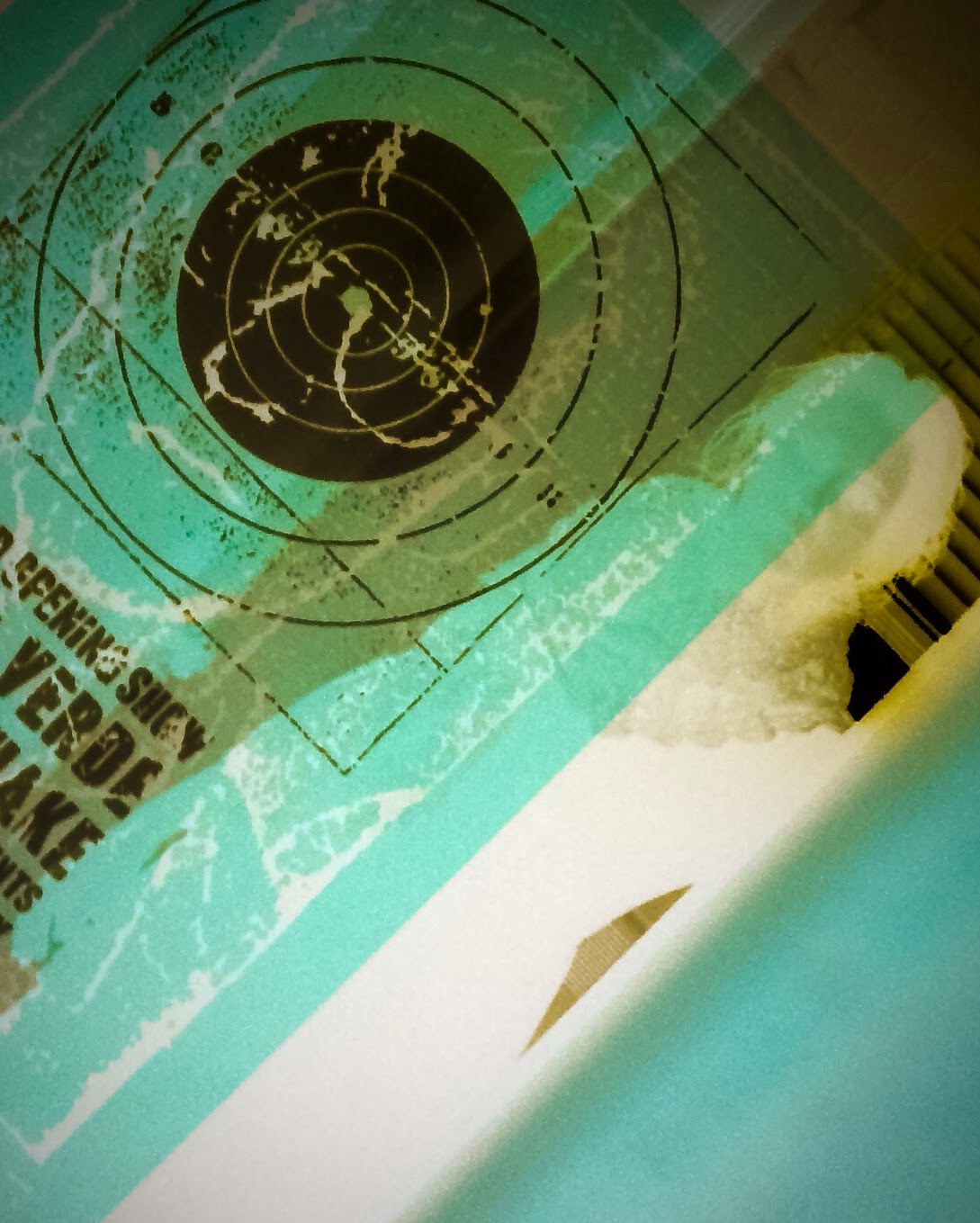 "We are all within our future"
* 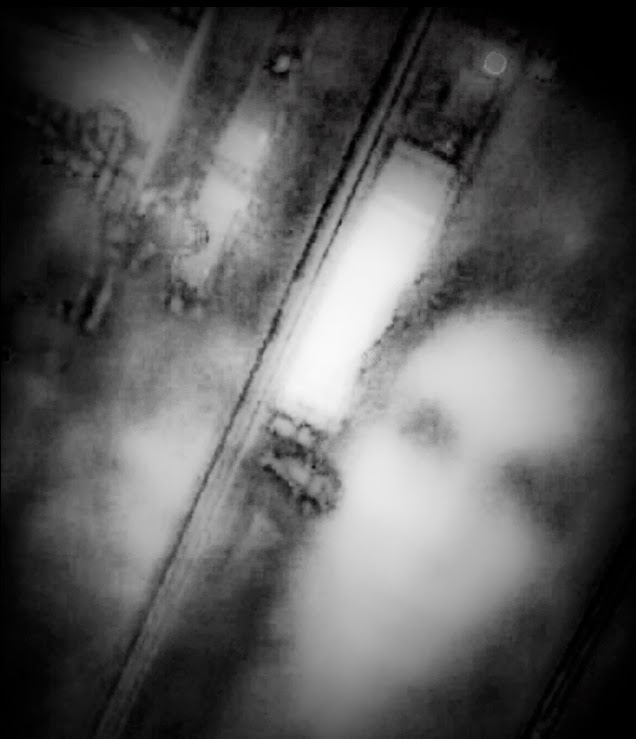 "Sparkling tricks of our future"

Check out our open commission for phantom selfies if you want to play along.

Also, Gina was a source in Nancy Fowler's excellent radio and web feature on Poetry Scores and phantom selfies for St. Louis Public Radio and The Beacon.
(Contact us if you want to reach Gina regarding use of an image.)
Posted by Poetry Scores at 6:56 PM No comments:


Poetry Scores is issuing an open commission for Phantom Selfies that translate Andreas Embirikos' 1935 poetic sequence Phantom of the Dreams' Origin into the medium of a selfie.

The process is simple. Take a photograph of yourself that is in some sense "phantom," then title that photograph after a direct quote from Embirikos' poem, as translated from the Greek by Nikos Stabakis.

Need some help thinking through what a Phantom Selfie might be? So did we. So we asked translator Nikos Stabakis. Stabakis replied:

"Phantom" refers to the word Φάντασμα (Phantasma), meaning a phantom/ghost, its etymology pointing to imagination (Phantasia/Fantasy), but also to appearance (as in "apparition" taken to denote a ghost). Some ambivalence there (a creature of the imagination or something that appears through it).

So you could say a Phantom Selfie is a selfie where you appear as a phantom or ghost, "a creature of the imagination or something that appears through it." And it has to be titled using a direct quote from Stabakis' translation of Embirikos.

For fun, Poetry Scores will offer a free copy of the Phantom of the Dreams' Origin recording to three people who submit Phantom Selfies. One each of those three winners will be selected by translator Nikos Stabakis, guest curator Andrew Torch and composer Barbara Harbach.

Also, Phantom Selfies will be published on the Poetry Scores blog, arranged according to the title of the selfie and where that title appears in the flow of the poem. Check out how that works by looking at this Gallery of Snow White Mirror Selfies, from our inaugural selfie open commission based on the poetry of Anne Sexton.

The deadline for Phantom Selfies is April Fool's Day, 2014.

Embirikos' photograph of the masked woman borrowed from Fainting Christine.

Phantom of the Dreams' Origin, translated from the Greek by Nikos Stabakis, is excerpted from a longer Embirikos piece, Blast Furnace (1935).

Nikos Stabakis' translations of Andreas Embirikos first appeared in his definitive Surrealism in Greece: An Anthology, still in print with the University of Texas Press.


Posted by Poetry Scores at 7:03 AM No comments: