The extinction of species (project page) 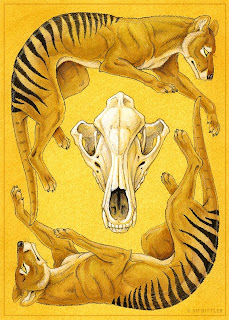 At our board meeting this week, Poetry Scores agreed to start a new project with a somewhat new organizational model. The project is a multimedia score to a collection of shorter poems by Stefene Russell titled The Extinction of Species. It is a growing, evolving poetic sequence, each piece about a species that has gone extinct.

We typically work with long poems, that's something of our forte, but the advantage of having a batch of smaller pieces is we can part them out as individual song lyrics and commission individual art responses to them without having any unified big picture or needing to stitch together the fragments in the end.

In a sense, we'll be asking artists to adopt an extinct species. As we get finished songs, we'll post the mp3s, and as we get works of art, we'll post the images. At some point along the way we will publish a book (project manager: K. Curtis Lyle). When we have enough of all the other stuff, we can print a CD and throw an art party with a P.I.V. (poetry initiates valor) reception.

THE EXTINCTION OF SPECIES
Poems by Stefene Russell

Suitcase jaw, knife stripes, they eat the bones.
No bloody feathers blowing against the salty grass,
and the chimera shadow, the flip book with jowly
wolf head and hindquarters of a tiger and a middle
part that we don't know how to name.
The farmer's children slam the closet door,
pull the hems of coats and dresses over their eyes
at the thought of croupy barking
But the gait: three animals put together,
the book says "awkward, though tireless"
like the one who can't keep up, far down the path
three rhythms that trip off a little migraine of the heart.

Sometimes water goes down the drain the wrong way
in the South, zipping dissapearance of black water
silver whorl, shape of dizziness
common name to call for nothing
just a little more than latinate or mounting pins

The prickly-eyed crow can't find you,
he's face-down in the field
And the gray owl, your downy cousin
gave up hope months ago,
sick and drunk on water and brown mice.
The lady in the flowered bonnet,
the one with the club foot,
can't find your starry leaves,
and here, fence knothole
where her husband used place his eye
to use as a telescope
to watch the sun go down,
there's nothing but a tree.

It didn't glow in the dark
or eat silt, it was not pin-striped,
it didn't know any magic tricks
and its skin was the three colors of mud
and its fins were accordion fans;
its funeral music was nothing but
blood curling into the water.
A man with three cards up his sleeve
and a shiny green suit
kept a slack-jawed fish from Egypt
in a wide-mouthed glass bottle
and carried it with him as he traveled.
He thought about letting his fish go
on the strip, in the flowering spitfire waters
where the fiberglass pirate ship
rocks back and forth every hour,
shooting plaster cannonballs
suspended on wires,
then thought better of it.
Into the desert he drove,
with a malfunctioning gun
under the passenger seat
a burlap sack of kwik-crete
in the trunk, and his fish in a jar
dancing back and forth
as the car lurched.
Here's your new water, fish -
Goodbye and now for you
your own drunkenness and
all-night carousel, your
fish Paris and Rome and Memphis.
Go whirl around in the river, outlines of
Indian paintbrush wavering over you in the darkness,
and the lights of the city, far off,
promising you everything,
lights effervescing
like a pirate's flying saucer.

Mercierii: and a purr that was thank you, wrapped up in yellow burry leaves.
Tristiami: mercy's yellow belly feathers,
whispery green, red-capped, Voyage of Venus -
sailors and men in shiny black top hats
came walking off ships, their pockets full
of owlets, kittens, whiskery rats.
Why didn't they notice, after their animals ran,
so many pears, pulling branches down low,
and no doves to eat them?
"Well, in those days, you saw a lot of animals
running through the green leaves, with blood ringing their mouths.
We lost track."
Te Henua Enata: Land of Men
who ate the fruit themselves, hunched over in grief.
**

Spring of violet and brown sundown, white sun.
The little girl didn't want any postcards.
While holding her mother's hand,
she saw something small and blue
flicker through the dunes and the lupine,
then turn into the sky.
She remembers a feeling like a wince,
a bitter mouthful of grass.
Her children say of course she's still here,
Though she swears she left
chasing the king of the blue butterflies.
His white spots were her goodbye,
and she still follows, and she goes
passing through the gold needles
that hold up the big bridge,
following a blue kite with ants tied to its tail
like ribbons.
Posted by Poetry Scores at 12:54 PM

i would like to do "Gray Shasta Owl's Clover" in my guise as poison rat r.