How the Grammy is won by Adam Long 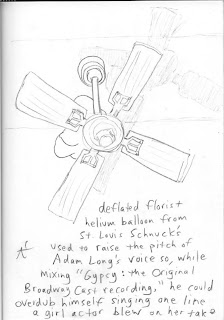 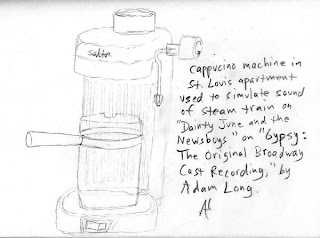 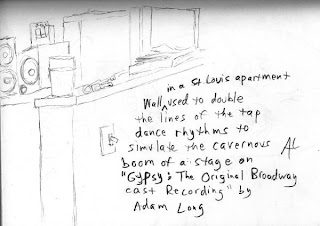 There is no Grammy category for a Poetry Score - a long poem scored as one would score a film - a category that we would like to think we invented (or, anyway, named). So it's not possible that we could be nominated for a Grammy this year. But one of our people is!

Grammy nominees were announced last night, and among the nominees for Best Musical Show Album is Gypsy, which was recorded in New York and mixed and mastered in Midtown St. Louis by our own Adam Long, who - when he isn't singlehandedly engineering original Broadway cast recordings - is helping to record and singlehandedly mastering our poetry scores. Adam mastered Blind Cat Black and Go South for Animal Index for Us, and even tonight - as he and I celebrated his good news at Strange Brew - he pledged his help on the score to The Sydney Highrise Variations.

The Grammys don't name-check the grunts. The nomination only names the producer (Robert Sher), composer (Jule Styne), lyricist (Stephen Sondheim[!]) and star (Patti LuPone); everyone else gets folded into "Others". But the producer, Robert Sher, flies this carrot-topped kid from St. Louis to New York, and then (somewhat painfully) relocates himself to St. Louis for weeks on end, because he knows Adam can get him the sounds he needs as no one else can.

How Adam gets those sounds is another story. Tonight, before we left to see City of Lost Children, Adam treated me to beers from Wisconsin and tales of tricks of the trade.

How he reproduces the sounds of the Broadway stage in his apartment in St. Louis was highly hilarious to me. I had to quickly sketch still lifes of the balloon whose helium made him a girl singer for one line the actor had botched, the cappucino pot that played a steam train, and the stairwell wall that tapdanced with the stars. I invite you to double-click on my sketches so you can read the little stories better. (All the sketches are signed by Adam.)

Broadway loves this guy. The producer already told Adam to buy a tuxedo and come to L.A. in February and expect to be pulled onstage when they win. I'm really happy for this guy and really happy to work with him. We love you, Adam Long!
Posted by Poetry Scores at 10:52 PM

More beer bottles in toast to Adam. He is probably the best archival mbira recordings restorator as well. The peaking twilight dances for crescent moon, Jupiter and Venus must be a favorable alignment for him. Is not Jupiter sometimes referred to as the "Carrot-topped Planet"? Great sketches on your part!

Thanks, Br'er Richard. Come back and see us.