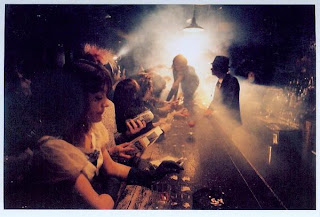 Fred Friction wrote me a letter years ago in which he mentioned that he had spent the previous evening "in a roomful of Spaniards and a guitar with a broken string."

The line stays with me, though I've lost the letter and forgotten the occasion for his sending it. Maybe that line is why I thought of Fred when Matt Fuller and I were scoring Blind Cat Black and we needed a singer for a strutting guitar song in which someone's fate is "in Spanish."
The strutting guitar figure originated with Matt, worked out in his sister's garage in Hollywood. The words are by the Turkish poet Ece Ayhan, translated into English by Murat Nemet-Nejat, a Turkish Jew who lives in Hoboken and sells antique Oriental rugs to support his poetry habit.

The piece we wanted Fred to sing is called "Epitafio"; it's the second piece in the prose poetic sequence that is Blind Cat Black.
*
Epitafio


They came drowned in the afternoon to the blue house on the wharf of brown broadcloth cafes. Her fate was in Spanish.

They are bending their heads again, for their sister, as in the morning. She promised. She will comb their hair and part it in the middle. The deadtangle.

And it is calling them, screaming, screaming, from an alley of card players, a children's game with thousands. The jack is up.

They see it and how they laugh with their enduring chuckles. But they can't join the game. What can one do? Their bundles are being wrapped. They are in a hurry. Rotten ...

Will she appear again before them, the fat woman who wants the hooks and eyes of her winter coat to be clasped, and their sister, also, on the mossy rocky road to Africa?
*
I liked Matt's sketch on the guitar tape he had mailed me from Los Angeles so much that we used it on the score. Meghan Gohil transferred the guitar track from Matt's cassette into a digital format and we had Fred over for a memorable session in the Senate Building in St. Louis, just north of Forest Park on Union, where Meghan was living at the time (he has since ended up in Hollywood, too).

Fred followed the melody I had written for the song, but paced his vocal differently. It took him a little more time to get through the lyric and he couldn't quite squeeze in the final line of the poem - "Will she appear again before them, the fat woman who wants the hooks and eyes of her winter coat to be clasped, and their sister, also, on the mossy rocky road to Africa?" So our song "Epitafio" trails away on the line "Will she appear again ...?" which I thought was effective.

Since the rules we set for ourselves in scoring poems requires that all of the words be used, in the order they appear, I set the rest of that line to music myself, and we recorded that as the next song in the score, "The Fat Woman".
To finish "Epitafio," we later added Matt on drums, Lij on bass, and the angelic Heidi Dean on backing vocals at Lij's home studio in Nashville. When all of these other elements had the effect of drowning out Matt's original guitar part, we had him layer another guitar track over it, with more distortion. That was the last thing we recorded, in Meghan's studio in Hollywood, which means this track began and ended with Matt laying down the same guitar part in Hollywood, nearly a decade apart, and Meghan recorded sessions in two different states for one two-minute song!
Free mp3s for ya ...
* "Epitafio"
Lyrics by Ece Ayhan and Murat Nemet-Nejat
Music by Matt Fuller and Chris King
Performed by Fred Friction with Three Fried Men
* "The Fat Woman"
Lyrics by Ece Ayhan and Murat Nemet-Nejat
Music by Chris King
Performed by Three Fried Men

* We also have a rough cut of the corresponding scene from the movie posted up on YouTube. It's crying out for color correction, but there it is.

The Blind Cat Black CD is still in print and available in various independent shops in St. Louis and through us directly.

The photo is by Mathew Pitzer and was taken during the filming of the movie to Blind Cat Black at CBGB, which we conceived of us "the blue house on the wharf of brown broadcloth cafes."
*

To commemorate the release of the new Fred Friction debut solo record Jesus Drank Wine, I'm doing a little series of posts devoted to Fred's contributions to Poetry Scores. Also in this series: