Under Another Umbrella in San Pedro 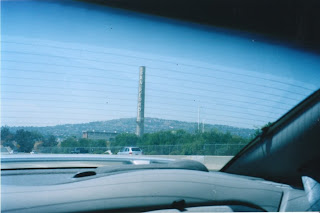 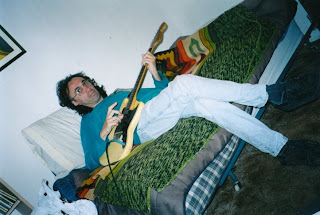 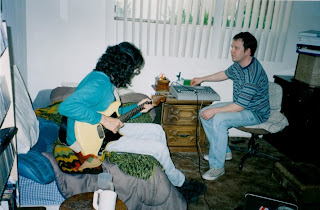 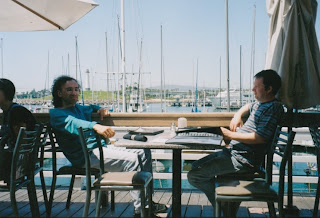 San Pedro, California has a significant and enduring presence in our poetry scores - in our long poems scored as one scores a film.

Our man in San Pedro is veteran musician Richard Derrick, seen here in his native element (making music at home, with the assistance of my coproducer Matt Fuller) and ordering off the menu at a harborside brewpub in Long Beach.

Richard's work with the improvisatory Los Angeles rock ensemble Middle Sleep plugged crucial gaps in our scores to Blind Cat Black and Go South for Animal Index, and promises to have an even larger role in the score Matt and I are producing with Robert Goetz for The Sydney Highrise Variations.

Middle Sleep was (hyper)active only for a few years in the early 1980s, from its home base on Lookout Mountain in the Hollywood Hills. For many years after that, Richard continued to unfold his post-progressive rock experiments under the umbrella of Another Umbrella, essentially his own project, though with intermittent and ongoing help from many supremely creative friends, including Crane.

Richard has released a series of volumes of his Another Umbrella improvisations for digital download on his Box-o-Plenty imprint. I can't recommend this music enough for people who want to expand their mental horizons, relax, meditate, or license music for another uses.

I have a complete set of the Another Umbrella archive, at its current editorial state (Richard is forever culling, excerpting, synthesizing, from his decades of unreleased recordings). I have begun to sort these 20-plus discs into a number of categories: poetry scores (of course), skeletons for rock songs, meditation sounds, yoga music, film scores, beds for spoken word, and stand-alone records that need to be heard just as they are.

Another of our Southern Californian co-conspirators, Meghan Gohil of Hollywood Recording Studio, is expanding the bandwidth on his website so we can upload links for more of our music. When this is done, I will post a series of Middle Sleep compositions, paired with the use we made of them in our poetry scores. This will show, I think, just how amazingly talented Richard and his bandmates were - and the open-ended possibilities they present to a producer.

It will be years (at least two) before Another Umbrella begins to show up on our poetry scores, so in the meantime I encourage anyone with adventurous ears to visit Box-o-Plenty and plunk down some coin for downloads of this music in its orginal state, before we begin to drape it around poetry, and set Robert Goetz loose on it with a harmonica or an exploding automobile.

Thanks too many times to the late d. boon of The Minutemen, Richard's friend and roommate, and Derrick Bostrom of the mighty Meat Puppets, for making the introduction, as I explained in my essay about the Go South score.

Minutemen fans (come on, y'all) also should not rest until they own the CD Richard compiled (d. boon & friends) of the house jams and backyard barbecues he and d. boon played together in the last years of d. boon's life, before he was taken from us too soon.
Posted by Poetry Scores at 7:14 AM