I. Revenge of the Volkswagen?

A long day of location scouting began with the consolidation of cars. We met at O'Connell's Pub. Laurent Torno III and I were chatting about the movie we are making when Dawn Majors arrived.

We were discussing the vintage car we need for the picture. A '50s Volkswagen I could borrow for free had been supplanted by a more appropriate $200 rental '40s American model. I was left alone in my own Volkswagen as Dawn and Laurent shuttled their cars into the surrounding neighborhood, where I would pick them up.

But, suddenly, my car wouldn't start. The key wouldn't turn in the ignition.

Jiggling the steering wheel, an old ignition trick, I managed to lock the steering wheel to the far right. I thought a push-start might free up the ignition and steering. Given where I was parked, and the hard right position of the locked steering wheel, I would not have much space, once the car pop-started - to break before crashing into the pub.

Bad in any event, this would be made worse by the fact that O'Connell's is the family pub of a Poetry Scores board member and actor in the film, John Parker. In fact, we were meeting there that morning because the family pub was hosting a shooting launch dinner for the cast and crew at the end of the day.

After I called Dawn and Laurent back to push my car toward the pub, and while I was considering how little space I would have to start the car yet not hit the pub, into that narrow zone between Volkswagen and O'Connell's slid a delivery truck.

Now there would be no way to get up enough velocity to pop-start the car before we pushed it into the delivery truck - or the delivery men unloading product on a hot July St. Louis Saturday morning.

The delivery men declined moving the truck until we solved our problems: They were on a tight delivery schedule.

Dawn and Laurent conferred. Managing battery power for their cameras is a constant concern for them. Perhaps for this reason, they suggested it might be a drained car key battery. So off they went with my car key to get me a car key battery.

Then I put my hands on my hips. I detected what seemed to be a car key in my pocket. It was a car key.

It was a car key, it fit right into my ignition, and indeed it started the car. How did I have my car key, of Dawn and Laurent had my car key? Obviously, Dawn and Laurent were on their way to the battery store with the car key to my wife's Volkswagen, not mine.

I called them back. After all due explanations, apologies and calls home, we were off to scout locations in my car. "Remember," I told Laurent, "my car - a Volkwagen - froze up on us right after we were talking about taking the vintage Volkswagen out of the movie. I consider that an omen ..."

To be continued.
Posted by Poetry Scores at 5:53 PM 1 comment:

The Trinity test, thunderstorms and our first day of shooting 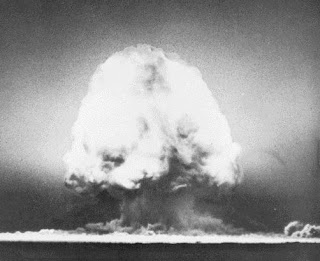 July 16, 1945, the day scheduled for the first test of the atomic bomb at the base camp south of Los Alamos, was predicted to experience thunderstorms and indeed it stormed all night. There was every chance the Trinity test would be cancelled, but in the end there was a break in the weather - and then a crack in the universe when the split atom bomb successfully detonated, fusing the desert floor around it into green glass.

We scored Stefene Russell's poem about the bomb, Go South for Animal Index, and are now preparing to make a silent movie to the score. Stefene's poem ranges wide in scope, geography and timeline, from Congolese uranium miners to European pioneers in nucleaur chemistry to Nevada fallout victims of the bomb testing that continued in the U.S. long after the immolation of Hiroshima and Nagasaki.

There is enough archival footage out there to make a "see it, say it" style movie that illustrates the lines in the poem line by line as they unscroll in the poetry score, but that approach is not for me. In writing a silent movie scenario for Poetry Scores, I like to take the core themes of the poem and come up with a parallel story that we can cast and shoot as a fable using local actors and St. Louis locations.

I decided to end our movie with the Trinity test, stopping before the real death and suffering - those torched Japanese cities and the Downwinders - with one of history's most dramatic moments: evidence of the weaponized split atom dawning over the American desert. And I thought we should start shooting on July 16 (2010), beginning to shoot our action on the same calendar date on which our action will end on screen.

Good idea. Except I was returning from two weeks in Paris on July 13. Despite a heroic effort in my absence by V "Elly" Smith to assemble some props needed for one of our storylines, I could only pull together one day of scenes for our opening weekend of shooting. On July 16, rather than starting to shoot, we were still slogging through location scouting, which we did as a group, with a little moonshine to pour into the Earth in two holy places where we will be doing some of our work.

Then Saturday, July 17: a full day of location scouting and roadside shooting, in lieu of locations, costumes and actors in place to shoot anything else. This was a bizarre day, tinged by the supernatural, which will get its own separate development on this blog.

The characters for these scenes are Coyote, Badger and Wife of Badger. Coyote and Badger are primal culture heroes for the Navajo, and Stefene wove into her poem many of the cultural patterns of the Navajos who mined much of the uranium that, enriched, went into American bombs.

Our Coyote is a tramp, played by Kyla Webb - the eternal trickster living off his wits, and his whiskey still, in the woods. Our Badger is a tribal scamp, played by Roland Frank, styled after the palm wine drinkard of African folklore (and reality). In a storyline intended as comic relief, an earthy counterpoint to the nuclear experiments of Lost Almost, Badger steals fish from the tribe, sneaks into the woods, and trades it to the Coyote for gourds of moonshine.


Coyote is making his moonshine from corn mash. He also is stealing his corn from the tribe. Out at the lake this evening, we had plans to shoot Wife of Badger (played by Charlois Lumpkin) farming corn, Coyote stealing it and getting caught, Wife of Badger chasing Coyote, and Coyote escaping into the woods. I have in mind a mixture of tribal folklore and silent film comedy that could be unique - and should help break up the arduous task of getting silent drama out of nuclear physics.

But alas, the thunderstorms that did not squelch the Trinity test in 1945 have rained out our first day of live action shooting for our movie itoday. So I just ate some of Badger's prop fish, some tasty smoked mackarel roundscad, and wrote up this. Maybe I'll move onto the prop moonshine next ...
Posted by Poetry Scores at 9:09 AM No comments: