"And the oldest trees": a scene for Coyote and the soldier

Posted by Poetry Scores at 9:14 PM No comments:

Richard Derrick rocking out with d. boon and Mike Watt

Like a lot of overcommitted people these days, I am always dumping things to my personal email account as into a sort of electronic junkbox, as if some rainy day will come when I will sort through it all and put it to use.

Today is a rainy day.

Way back in June 2009, my coproducer and songwriting partner Matt Fuller sent me a video clip of The Minutemen performing live in the early 1980s. Nothing surprising, there - Matt and I have been making music together for twenty years and have kept the seminal San Pedro post-punkers squarely in our sights throughout our partnership.

There is, however, an inside personal bonus on this video clip - our new friend and collaborater Richard Derrick is playing drums on this gig, rather than Minutemen drummer George Hurley.

As I described in some of the liner notes to our Go South for Animal Index poetry score, Matt and I met Richard Derrick in San Pedro to do something of a windshield tour of Minutemen sites. Richard had been good friends and roommates with Minutemen frontman d. boon (who died in 1985) and had released a posthumous record of jams, d. boon & friends, that I reviewed for L.A. Weekly after Derrick Bostrom of The Meat Puppets gave me his advance copy.

To rock & rollers of a certain age, this may sound like name-dropping, but I don't care. We have been doing this stuff persistently for a long time and it has paid off, in terms of experiences and creations, which is why we do it.

After a pleasant visit with Richard Derrick, as an afterthought he dubbed some discs of his own music for us to keep. After listening to one disc in particular, Middle Sleep, I asked Richard if we could make use of some of the tracks on our poetry scores, and he said sure.

I now have more than 80 unreleased discs of Richard's music he made with an assortment of friends and bands over the years. This music has prominent places on three of the four poetry scores we have completed - Blind Cat Black, Go South for Animal Index and The Sydney Highrise Variations.

On November 12 at Mad Art Gallery we will release our fifth poetry score, Jack Ruby's America, and when looking for some noir rock to evoke the moods surrounding Ruby's murder of Lee Harvey Oswald, I turned to none other than Richard Derrick and his (mostly one-man) band Another Umbrella.

So, anyway, I spend a bit of time at bars and parties, trying to talk over some music to explain to another rock musician what a poetry score is and how we now make our records "with this guy who was friends and roommates with d. boon and The Minutemen," and I suppose I am blogging this as a place to host this video clip of Richard rocking out with d. boon and Mike Watt back in the day as some reassurance that this is all real outside of our minds and memories.

Richard tells me that the Minutemen songs he included on d. boon & friends are from the same gig as this video.
Posted by Poetry Scores at 8:47 AM 1 comment: 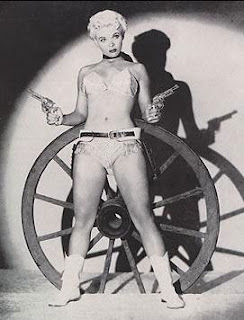 So Poetry Scores is producing a live show 8 p.m. Thursday Sept. 23 at The Foxhole at Atomic Cowboy. It involves a small burlesque component. We'll have the Dave Stone Trio improvising a score to Missouri Poet Laureate David Clewell's long poem "Jack Ruby's America," with the poet performing the poem. They will be joined for a brief stretch by Lola van Ella dancing a burlesque scene she is choreographing for the show.

"Jack Ruby's America" is Clewell's meditation on the Dallas burlesque club owner who shot Lee Harvey Oswald dead on national television. Oswald, of course, had been arrested and accused of murdering President John F. Kennedy and a Dallas police officer.

Ruby ran a Dallas burlesque club called the Carousel. When I first approached Lola about choreographing and dancing a burlesque routine for the Carousel Club part of the poem, she immediately got enthused about Candy Barr, a dancer who worked at the Carousel, and said it would be fun to work up a tribute to her.

One thing I love about Lola is what a geek she is for artistic process. From the first days of our friendship and collaboration, we cleared the air that we could talk shop at any time and never feel constrained to just party or small-talk. So I am just thrilling on the following peek into her artistic process.

This is a message from Becky Simmons, who works with Lola on her costumes. She is writing to Lola about the Candy Barr costume for the Poetry Scores show, in reference to the above images:

Becky Simmons: I pulled these two pictures. So I can take a regular pair of panties and put fringe and whatnot on them to make them look like they do in the one picture, and either cover a bra or make a triangle-style top and match it to the bottoms, then make a panel skirt of some kind to go with it? And you could wear something else on the bottom so I could make the panties snap off, like your blue bow ones. And maybe if you had a little denim jacket or something over it you could just start with that, and make that the first thing you take off, then the panel skirt, then the bra, then the panties, and then the holster if you want. Or you could leave that on I guess, I don't know what she did. But I can get a little red piece of fabric so you can tie it around your neck, and it doesn't look like she wore a hat but maybe if you had a miniature one (kind of like a miniature top hat) that might be kind of cute?

I totally, totally, totally love this! I learned so much from it. Of course it stands to reason, but I had never considered that a burlesque costume has moving parts - it is as much a machine as it is a garment. Janet Jackson taught the world about "wardrobe malfunction," but I now know a burlesque artist and her costume-maker are all about wardrobe function.

Poetry Scores is a Missouri non-profit arts organization based in St. Louis that translates poetry into other media. Email brodog@hotmail.com for information.
Posted by Poetry Scores at 12:22 PM No comments: