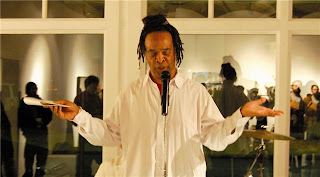 Local arist Kelsey LaPoint has blue computer gremlins, in part, to thank for her emergence in a major new work by St. Louis-based poet K. Curtis Lyle, Barackutopia. The fifth movement of the six-part poem is titled "Kelsey LaPoint Convenes a Conference of the Birds".

Curtis had already crafted that movement of his poem when he received via email this striking photograph of himself from Kelsey. She captured Curtis in the spirit while performing Nailed Seraphim (with Baba Mike Nelson, David A.N. Jackson and Christopher Y. Voelker) at the Poetry Scores Art Invitational devoted to the poem.

The thing is, Curtis' computer somehow construed the jpeg image oddly. The brother came out all blue. You send a poet a picture of himself where he looks all blue, you're going to get some kind of a response.

Curtis' response was to remember how Krishna is always depicted as being blue. This spoke to his sense of the mythic sources for that section of the poem, so a polyphonic parable about birds suddenly had a young artist working in St. Louis peeping through its title.

The interesting thing is, this image of Curtis doesn't seem to appear in Krishna blue on any computer other than his own.

Poetry Scores is currently considering cashing in (a'hem) on Obamamania by rushing Barackutopia to the front of its project schedule and publishing it as close to the inauguration as we can manage. We'll see.
Posted by Poetry Scores at 12:29 PM