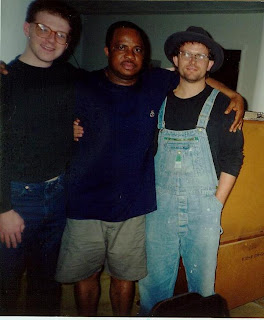 Last night at the Poetry Scores board meeting we finalized one date on our 2009 calendar: Friday, Feb. 6 we will host a Grammy Launch Party for Adam Long at The Royale, 3132 S Kingshighway Blvd. We forgot to discuss the time, but let's say 9 p.m. to ?.

He'll leave the next day for Los Angeles, where that Sunday he will have two opportunities to win the big one. Unbelievably, for an independent studio engineer living in St. Louis, two records he recorded, mixed and mastered - Gypsy: The Original Broadway Cast Recording and Our World Redeemed, by local gospel hip-hopper Flame - have been nominated for a 2008 Grammy.

Adam is one of our powerhouse volunteer staff recording technicians. He mastered our 2006 poetry score to Blind Cat Black, and mixed, mastered and helped record our 2007 score, Go South for Animal Index.

At the Feb. 6 Grammy Launch Party, DJ Matt Fernandes will spin only recordings recorded, mixed or mastered by Adam Long. The complete list is nearly endless and would be impossible to provide - Adam has forgotten more sessions than most people have recorded - but here is a partial list:
Broadway original cast recordings:
Ring of Fire,
Annie (3oth anniversary edition)
Gypsy
Secular hip-hop:
St. Lunatics (Nelly's first studio recordings)
The All Stars
1 Dime
Chingy
Rock:
Conquest
The Imps
Three Fried Men
Poetry scores:
Blind Cat Black
Go South for Animal Index.
Spoken word:
K. Curtis Lyle
Stefene Russell
Harp:
Amy Camie
Sacred hip-hop:
Flame
Gospel
Solomon's Temple Church Choir
Activism
The Movement for the Survival of the Ogoni People
(On Radio Kudirat, Nigerian rebel radi.)
(The photo is of Adam and me with MOSOP leader Noble Obani-Nwibari.)
I'll be rounding up copies of the recordings I don't have. Please, anyone who has recorded with Adam, get me a disc! And save that date for one of the most talented and most generous people in St. Louis.
Posted by Poetry Scores at 4:31 PM