Fragment of a faded rose from a brokenhearted girl 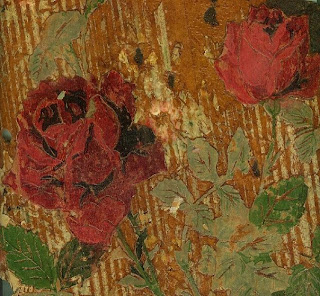 This is a detail of the latest addition to the Honest to God Art Collection in The Skuntry Museum, which I curate in my basement (and in whatever other slivers of the house my wife will let me encroach upon).

It's untitled, or if it's titled the title is unknown to me. It is found art, but since Rick Hawkins found it, framed it, and presented it as art, I suppose he gets the credit for it.

It was given to me this week by a mutual friend, who gave up on a long-distance relationship with Rick (who lives in Murfreesboro, Tennessee) some time ago and couldn't get over the sadness of having his art in her house.

I am posting this up on Poetry Scores, rather than on my personal blog, because Rick contributed a companion piece from the same series to the 2oo6 art invitational for Blind Cat Black that we curated at Mad Art Gallery.

The pieces in this series are relics of very old wallpaper that Rick found (I hope I am remembering this right) when stripping the walls of his house. He found a certain haunting beauty to them, and those who have seen the pieces tend to agree. (I remember Stefene Russell being especially struck by the piece he contributed to Blind Cat Black.)

I can't remember what Rick titled the Blind Cat Black piece, but the poem has a flower vendor in it (played by Jason Wallace Triefenbach in the movie) and a great deal of elegiac floral imagery, so Rick would have had plenty of titles to choose from.

Blind Cat Black is written (in Turkish by Ece Ayhan; translated into English by Murat Nemet-Nejat) in a fragmented, layered style, which made it fitting to have a fragment of a buried layer of wallpaper as a contribution to the art invitational. A scrap of buried, disintegrating wallpaper also befits the mood of the house imagery in the poem, such as "My Aunt Sadness drinks alcohol in the attic," a line that provided the name for the character Stefene portrays in the silent film.

Rick was one of the earliest contributors to Hoobellatoo, the field recording project that spawned Poetry Scores. He documented one of our earliest journeys, and met and photographed many of our now-deceased subjects, such as Nymah Kumah, Leo Connellan, and Rosco Gordon. He partakes of a particularly soulful human type that is one of my favorites: the Southern white guy who "gets it".

Note to self: Get Rick involved in next year's invitational. Get Rick to come to St. Louis for the show. More Rick, not less.
Posted by Poetry Scores at 6:03 PM

Hell f'n yeah...more Rick is right. Hey Mr. curator
what's it gonna take to get this man to be a part
of this loathsome community. Ok, I add to the
loathsomeness but look at this place...if it weren't
for some bright apples like the majority of people
who read this blog and post on this blog...then
it wouldn't be much of a place. Place=people.
Good place=good people. Great place=Rick (and
some more great people). Who's the gal? You can
pm me (private mail=email) on that one.

thanks posey!
I love your site as well!

did i say posey,,,
its early and i should never post before caffiene..
nosey!
I'm sorry...come on over and i'll let you
shoot one of my microphones!