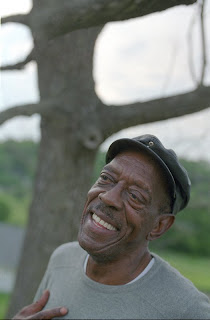 Poetry Scores grew out of a field recording project called Hoobellatoo, which had evolved from a rock band called Eleanor Roosevelt. The Hoobellatoo recordings were made by three of us from Eleanor Roosevelt: Lij, Matt Fuller and myself. We specialized in rather old people, which means as reasonably young men we ended up with a lot of dead friends.

It's been an adjustment. Vic Chestnutt (with whom I have a number of mutual friends in Athens, Georgia) once sang, "All my friends are off in the graveyard." When I hear that line, it has the capacity to make me stare off into space and think for a long time.

This experience is complicated - for me, it's enriched - by the fact that several of our subjects who are now friends off in the graveyard held articles of faith that upheld the value of ritual contact with the dead. Our first subject, the West African musician, wise man and clown Nymah Kumah, grew up in what he described as a Stone Age culture that venerated the dead as ancestors and believed in the transmigration of the soul, values that I (for one) came to share.

Rosco Gordon, whose record No Dark in America was one of the last things we finished as Hoobellatoo, grew up in the African Diaspora of the sharecropping American South, outside of Memphis, in the Mississippi Hill Country. (As a child he actually picked cotton - didn't appreciate the memory.) Up to his last day, Rosco held fast to certain African animist remnants of rural African-American culture, stuff that got swept up into blues lore and have been sung about by infinite bar bands who had no clue whatsoever what they were singing about, really.

Lij recorded Rosco's last sessions without me present, down in Nashville, though I remained updated throughout and was reporting back to the other people in the project via email. I recently came across this note, of Rosco searching for a root doctor and grave dust between takes in Tennessee, in an effort to undo what he considered to have been a curse laid upon his heart.

It sounds quaint. It wasn't. I saw him through several dark nights of the soul over just the same pain. I also knew the woman who broke his heart. Rosco saw heartache through the prism of juju, of voodoo. As we might say, using a similar metaphor that has lost its capacity to horrify, it hurt him like hell.

*
Rosco Gordon in Nashville: a session note
By Chris King
Rosco Gordon is in Nashville tonight, tracking with Lij. They are working in Lij's home studio with a crack band of local musicians: Ken Coomer (drums), Warren Pash (bass), and Joe Pisapia (guitar).

Ken and Joe are known to many in the indie rock scene – Ken was in Wilco, Joe fronts the band Joe, Marc's Brother. "He doesn’t like this to precede his reputation," Lij says of Warren, but Warren wrote a song none of us ever got out of our heads: "Private Eyes," recorded by Hall and Oates.

Last night they laid basic tracks for "Now You're Gone" and "There's No Dark in America," the post-9/11 tune that Rosco and I wrote together. Rosco has been suffering from a terrible writer's block and has asked me to bail him out of several jams. It's damn pleasant, let me tell you, sitting with a living legend, sipping a dwarf Budweiser, scratching lyrics.

The session has been hindered by another suffering our man has been going through. Lij has been driving him around local graveyards looking for some juju to throw off something a troublesome woman put on him just before he left New York.

"She put the bug on me!" Rosco just told me, using Lij's cell phone as they returned from a futile juju run. "I'm not supposed to feel this way about somebody like that. I can't remember my name!"

Confusion and suffering belong in these songs. Lij just played me their last take last night of "Now You're Gone." I heard Rosco singing,

And he sang it like he meant it, his heart on the line.

**
Memories of Rosco and Nymah make me want to spend a weekend in Nashville going over our
old source recordings with Lij and finding snippets of song and voice from our dead friends that we could use in future poetry scores. That would be a collaboration across the grave that anybody could appreciate!
Photograph of Rosco at his last session by Rick Hawkins.
Posted by Poetry Scores at 5:13 AM