We got started on a new poetry score during my recent visit to Los Angeles. Matt Fuller and I started scoring one of the books of ancient traditional Chinese odes; and Meghan Gohil recorded simple acoustic guitar and vocal sketches of eight of our new songs.

We are working from Ezra Pound's English translation of the 305 ancient odes. We are scoring odes 55-64, a book Pound called "Wind of Wei," more commonly known as "The Odes of Wei" and anthologized in the "Folk Songs" section of the canonical Chinese Classics.

According to legend, the ancient odes were anthologized and scored by Confucius. Though scholars no longer believe that Confucius single-handedly set these 305 odes to music and collected them in their present form, he did know the odes and sing them. He often is heard discussing them in The Analects, a collection of sayings attributed to Confucius and his circle. Confucius' only son, pestered by disciples for something The Master must have told his only son, said the only thing his father ever told him was, "Study the odes" -- know the old folk songs.

The musical settings that Confucius knew and sang (and may have composed, in part) have been lost to time. At any rate, we don't aim to reconstruct the songs as Confucius sang them five centuries before the birth of Christ. Poetry Scores translates poetry into other media, with a strong preference for cross-cultural modulations. Matt Fuller and I write music from a shared set of sources in American folk and rock music, so we'll present the old Chinese odes as American folk and rock songs.

Confucius himself played a stringed instrument described in English as a lute or zither (I like to think of it as a guitar) and stone chimes, something like a xylophone made of rock. Matt and I have started writing and recording on acoustic guitar, the contemporary American version of Confucius' ancient Chinese lute; and I feel compelled to add in overdubs some flourishes of xylophone (I have a good one made calabashes in Ghana) or even stone chimes, if we can get our mallets on a set.

"The Odes of Wei" is a cycle of ten songs, though our poetry score will have more songs than that. Several of the songs are long and varied enough to be treated as suites, with several component songs; of the songs Matt and I wrote this week, "Soup of mud" scores only a fragment of Ode 58, which will yield three of four separate songs in our score. Also, we always include instrumentals that are titled after phrases in the poem. Pound was an oddball who sometimes attached his own titles or epigraphs to the odes, and I'm inclined to use Pound's interpolated texts as titles of stand-alone instrumentals.

Pound's oddball status as a translator is a plus for us as songwriters. His frequently weird, densely impacted English workings of the songs Confucius sang just beg to be treated as fragmented rock lyrics -- the kind of songs Matt and I like to sing. Pound's Confucius could pass as a lyric sheet for Guided by Voices, Pavement, the Afghan Whigs or the earliest R.E.M. This stuff is fun to sing to guitar!

The UCLA scholar L. S. Dembo gave Pound some tough love in The Confucian Odes of Ezra Pound (University of California Press, 1963). Dembo points out how Pound used false etymology for words in a source language he imperfectly understood and played around with slang and Americana in ways that damaged the tradition Confucius loved and respected with "whimsicality and bathos". We suspect that our folk rock workings of Pound's Confucius will drift even further from the ancient shore, but we hope as these old poems travel with us, they make new, unexpected friends.

Dembo wrote that Pound "destroyed a folk song ... in order to create a sophisticated Western lyric." What we are trying to do is now restore some of the demolished folk song, sung in the voice of another place and time.

"To last out all time"
(Confucius, Fuller, King, Pound)

* Confucius: as noted, Confucius most likely wrote none of these songs, but since their authors are of unknown ancient Chinese origin, we take the liberty of crediting Confucius, a name that says "ancient Chinese" in the modern global village.

** Pound. Pound's English translations were published by Harvard University Press, which has (I assume) renewed its copyright; we'll need an agreement with the university press before making any commercial release of this material. In fact, I hope to enlist this great press as a colleague and partner in the project.
Posted by Poetry Scores at 5:45 PM 1 comment:

Our names in Turkish lights: Exdergi 4 (Contemporary Istanbul edition) is out! 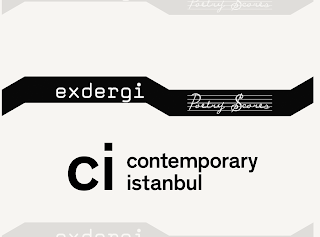 So, like we were saying, our sister citizens in Istanbul got us into Contemporary Istanbul 2011, inspired by Poetry Scores' announcement of its first sister city, the great Istanbul.

Our sister citizens publish the magazine Exdergi, and the new issue Exdergi 4 is now out.

It's published in Turkish, for the most part, as one would expect, but is beautifully designed and pleases the senses even if the mind doesn't penetrate the language.

As a benefit to people who worked on the first Poetry Scores movie Blind Cat Black, which screened at Contemporary Istanbul, this issue has our Turkish show poster, with two details from the poster. Open that PDF of Exdergi 4 and scroll down to pages 23 to 25.

I, for one, love to see this string of names of St. Louis actors in the Turkish lights:

Contemporary Istanbul coverage starts on Page 18 and includes some of Murat Nemet-Nejat's translations of Blind Cat Black into English that got this whole thing started.

Exdergi is edited by Ipek Tuna, with design by Ali Riza Esin; and we are very fortunate to be mobbed up with the creative people.
Posted by Poetry Scores at 6:25 AM No comments: