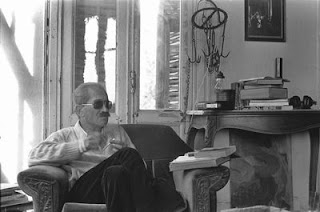 Poetry Scores has received its first publicity in Turkey of which we are aware in a poet's blog post dedicated to our work scoring Blind Cat Black by the late, great modern Turkish poet Ece Ayhan, as translated into English by Murat Nemet-Nejat.

The posting is by the poet Zafer Yalçınpınar who discovered our work on Blind Cat Black while putting together the first-ever website devoted to this complicated but important poet, who could be considered controversial due to the attention he pays to transgressive themes, such as drug use and prostitution.

"I wanna thank you for all of your work, material ... and faith for ECE AYHAN POETRY!" Zafer wrote to us. "We are grateful to you."
His posting provides links to 16 mp3s from our score that we had posted up for him, and downloads of the music from our box.net account have been steady ever since.
Evidently thrilled to have found kindred souls in America, Zafer has been promoting us to Turkish underground literature groups ("Karga Mecmua," "6:45," "Kadıköy Underground Poetix") and adding us to reference works devoted to the poet. He also has expressed interest in screening the Blind Cat Black movie that Aaron AuBuchon, Chizmo, Kevin Belford and I made to our score to the poem in an event he is organizing for February.
It's worth noting that after the poem's translator, Murat Nemet-Nejat, gave me a copy of Blind Cat Black (published by Green Integer in a companion volume with Orthodoxies) in the mid-1990s, I reviewed it in the prestigious Nation magazine. This was in the good old days when my editor John Leonard still ran the book pages at The Nation. That review was bootlegged in a Turkish translation and widely read in Turkey, as I learned later when I met and befriended Talat S. Halman, the dean (the god) of Turkish letters.

Poetry Scores is not otherwise a stranger to international acclaim. Our score to Crossing America by Leo Connellan was profiled on the BBC. I expect we will get some attention in his native Australia next year when we publish our score to The Sydney Highrise Variations by Les Murray. Not that our own St. Louis has failed to show us love!

Image of Ece Ayhan from the new website devoted to him, which has lots of pictures of this obscure poet.
Posted by Poetry Scores at 2:15 PM

It won't be long before all your passionate work
blows up. Can I get a job as press secretary
or perhaps security.