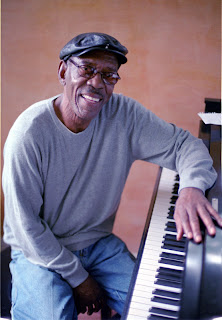 Almost completely hidden on our first poetry score, Crossing America by Leo Connellan, is one of the most influential songwriters and musicians of the 20st century: Rosco Gordon. He clanks on Nate Shaw's piano with chains draped over the strings, and he sings a fragment of Leo's poem ("The apple country") that I had set to music as an old worksong chant.

Rosco is well known to historians of the blues and Americana, in part because Sam Phillips recorded him just before there was a Sun Studios. There is a photograph of Rosco posed with a very young Elvis Presley in the very early Sun Studios days, and the amusing thing is the picture was taken at the insistence of Elvis, then an unknown raw kid, who wanted his picture taken with the great Rosco Gordon, who already had had a No. 1 hit record.

But that doesn't account for Rosco's claim to the first ranks of musical influence in the 20th century. That claim is based on the world dominance of reggae, certainly one of the century's most popular worldwide musical forms, and one solely traced to the jerky rhythm that came natural to Rosco Gordon when he played the piano.

When Rosco died, Lij and I were in the middle of making a record for him (which later appeared on Dualtone as No Dark in America; every home should have a copy). This gave Lij and me the distinction of having recorded Rosco Gordon's last session and eventually producing his last record.

Two Jamaican deejays doing the show Midnight Ravers on WBAI, the New York City Pacifica Radio affiliate, knew about our record because they had Rosco on the show once a year to talk about this backbeat of his that transformed the music of their home island, and eventually the world. When Rosco died, they had me on the show to talk about the record and Rosco himself, who was the best man in my Queens County Courthouse wedding and a dear, dear, dear friend.

On the show, these deejays played some of Rosco's early hits - "Booted," "No More Doggin'" - each followed by a string of cover versions by Jamaican artists. Their presentation showed what happened to Rosco's backbeat on the island - the musicians sped it up to get ska, and then slowed it down, to far slower than Rosco ever played it, to arrive eventually at reggae.

I'll never forget one of the Ravers, Terry Wilson, trying to convince me of the importance of this musician who had been my friend, first and foremost. "Rosco Gordon was not the root of reggae, man," Terry said. "He was the seed!" Emphatic as only an island man can be, when he's not sure you are following him, Terry went on to say, "You understand, the seed is primary to the root. Rosco was the seed."

American copyright laws, like so much else about this country's structure, have a British model (and probably a French model before that, since the Brits steal from the French only slightly more than they disdain them). This means you can copyrights words and melody, but not a rhythm, not a beat.

In traditional Africa, as Nymah Kumah explained to Lij and me, every tribe has a distinctive beat: you shall know a person's culture by their rhythm. An African-derived copyright law surely would respect the right to claim a rhythm and would have enriched Rosco to Beatles-like proportions. But the folks with the distinctive rhythms in their heads didn't get on the ships to America carrying the charter documents (or if they did, they were classified as cargo, like the charter documents), and they weren't allowed to help write or even read those documents until they were all done deals.

Now that I've arrived at transatlantic slavery, I'll move onto another tragedy, the death of Rosco and his funeral, which I attended. Rosco died with his bags packed for a gig in Green Bay and was discovered days later. It was a terrible situation. It affected me for a long time afterwards.

It's no consolation, but a curiosity, that his funeral landed me in both the documented history of the blues and a Martin Scorcese film, as the services were shot by Scorcese's documentary crew and people who have seen the documentary series (I haven't) and who know what I look like have seen me standing near Rosco's grave in one brief scene.

I had never heard of a blog at that time, but I wrote and emailed the following note to other people working on our project that day. Rest in peace, Rosco Gordon, seed of reggae and my good friend.

I said goodbye to Rosco for all of us just after noon today, when I laid a yellow rose on his casket. We put him in the ground in the Rosedale Cemetery in Linden, N.J., beside his second wife, Barbara.

The wake and service were held last night in a small funeral home not far from Rosco's apartment. I brought a jambox, and we played Rosco tunes until the preacher got started. The mourners were mostly family, a West Indian deejay and a film crew making a documentary about Memphis blues.

Bobby Blue Bland and B.B. King sent flowers, though in the end Poetry Scores did not. I reflected on Rosco's priorities and our poverty, and decided he would prefer to see our money go into his music.

The gravity of the ceremony was thankfully broken by the choir, which was just awful. I kept thinking what Rosco would say to hear these off-key, tuneless droners as the opening acts at his last gig. I imagined him cussing and plugging his ears inside the closed casket.

There was an interlude in the service when everyone was welcomed to speak. Lots of memories of getting calls in the middle of the night to hear the rough draft of a new tune. The deejay gave a sharp summary of Rosco's musical importance as the progenitor of reggae. I shared Rosco's favorite prayers (Psalms 45 and 71) and remembered something Rosco said when we first met him.

Lij and I had asked him how he stayed sane knowing people had stolen all of his songs. "They stole my songs," he said, "but I'm just happy they left me." I reminded everyone that, in addition to his songs, we all still have Rosco.

I know it's selfish to miss him. When I read Rosco's unpublished memoir, I asked him why it dwells on his early tours. "Music has always been my baby," he said, "and I had the light on me at the best time in my life – when I was young. Now, it's a business. Now that light is awful."

Stage light had become hateful for a sick man who once lived to play music. I'd like to think he is now singing and dancing and doggin' in a different light.

Photograph of Rosco at his last session by Rick Hawkins. Rosco's memoir still unpublished but in my possession!
Posted by Poetry Scores at 2:46 AM