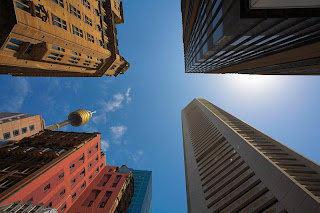 Not so long ago I welcomed into the Poetry Scores fold the creative St. Louis musician Frank Heyer. I carried on a little about how well his constructed improvisations fit in with what we do.

My coproducer Matt Fuller has since remarked to me with wonder how much Frank's music sounds like Middle Sleep, a group of improvisers from Lookout Mountain (Laurel Canyon, Los Angeles) active in the early 1980s, that we work into every poetry score.

I have since, under the tutelage of Robert Goetz, got one with box.net and learned how to upload and share the mp of 3 digital audio format. And so at this time I will let you hear for yourself the raw Frank Heyer pieces we will be working into our score for The Sydney Highrise Variations by Les Murray.

Free mp3s
* "In ambiguous battle at length"
By Frank Heyer

This one will get melded with the poet Les Murray's crazy mushy mouthmusic and who knows what all else - all doing ambiguous battle, at length.

The last track on the score. The intention right now is to leave this as is. When we get around to making the silent movie to the score (a rube in the city flick, a la Chaplin, in which the city blows up suddenly around his humble shack) this will be the close credits outro music.

Frank made the music and it belongs to him. We're just making something else out of it.