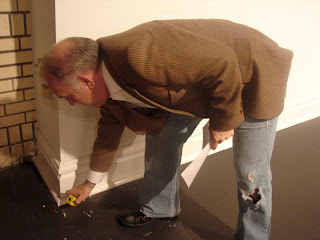 At this year's big Art Invitational devoted to Andreas Embirikos' classic 1935 poem Blast Furnace, we added a new musical component. Poetry Scores translates poetry into other media, but up until now our work producing records, movies and art shows have been disconnected in the public experience of what we do. We wanted to change that. So we hit upon the idea of inviting some composers to write and record a musical score to an Embirikos poem during our Art Invitational (7-11 p.m. this past Friday).

We had slimmed down Nikos Stabakis' selected translation of Blast Furnace, excluding six of the prose poems to leave us with a more manageable text for the poetry score that Barbara Harbach is composing for us. With six poems left out of Barbara's score, we invited six songsters each to score one of these six texts. Six being the number of sides on a conventional die, Embirikos being a Surrealist (the first, and best, in Greece), and Surrealism being absorbed in accidents and chance, we assigned poems to composers by casting a die.

Before songsters reported for duty on Friday night, musical supervisor Richard "Skoob" Skubish and I took turns casting this big puffy yellow die until the numbers 1 through 6 had been assigned uniquely to the six Embirikos poems (in Stabakis' English translation) that we had cut from Blast Furnace. Then, as a composer would come into the gallery, he or she would cast the die and take the poem assigned to that number, provided it wasn't already taken.

Only two poems were left when Nick Barbieri showed up, so it took him a few rolls to hit upon a poem that was not already taken, but a roll of 1 finally assigned "Desire" to him. As a relative latecomer, Nick also did not have the widest selection of spaces to do his composing. Mad Art is located in an Art Deco police station, so we had songwriters working in jail cells, in previously smoke-filled backrooms, and in foyers. We set Nick up in closed space set off from the police station's garage, which now is the gallery's main event space. There was an electric-powered door that closed, giving Nick privacy and sound separation, though it closed from the outside, reducing our valiant songster to pounding on the door from the inside when he finally had finished recording his song.

Nick took his cue from the title "Desire" and wrote sort of a sultry soul song that launches into rock guitar about halfway through. Here is the poem, followed by the song.

Prostrate with sugarcoated lips she lay on love’s luminous wreath. Before long the call was heeded. First she was taken away by two birds then by the wires of compassionate intrigue and finally by five roosters resembling trained horses who placed her between her own thighs. The response of alien ingredients vanished and with longing perfumed seaweeds and scintillating sighs she came unrestrained and clean like an essential and intense cloud. Now they are both named Merope.


-- Translated from the Greek by Nikos Stabakis, from surrealism in greece

Photo is of Nick Barbieri picking up the die. He had rolled a 1, the number randomly assigned to "Desire" among the six poems from *Blast Furnace" we had set aside for live scoring.
Posted by Poetry Scores at 7:36 AM No comments: