Jay Alan Babcock and Deb Douglas have no quinces 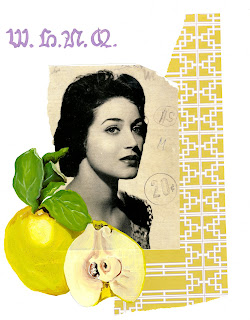 Deb Douglas just sent me this image of her piece, "We have no quinces," after Andreas Embirikos. This Art Invitational is based around the first masterpiece of Greek Surrealism by the great Andreas Embirikos, translated by Nikos Stabakis.

Like all pieces in our show, Deb's collage responds to and takes its title directly from the same poem by Embirikos, as translated by Stabakis. We are scoring a selection of prose pieces from Embirikos' 1935 classic Blast Furnace. Our selection, titled jointly with the composer Barbara Harabach, is Phantom of the dreams' origin.

Barbara is composing miniatures to sequence around the prose poems presented in human voice. My co-producer Stefene Russell and I recorded ourselves reading the whole sequence between us, but we also wanted the options of other voices. So I hit upon an idiosyncratic idea.

I asked Roland Frank, Poetry Scores actor and BBQ curator, to host a backyard BBQ where people were invited to bring an ingredient cited in the poem (it's full of food and animals) for Roland to BBQ, in essence translating Greek Surrealism into a backyard BBQ, and I'd then ask them to read and record the prose poem in the sequence where their ingredient is quoted.

Jay Babcock, longtime contributing Poetry Scores artist, brought his son Owen to the BBQ and they had whipped up some incredibly tasty iced lime concotion. There is a poem in the sequence titled "Lime," so naturally we had Jay read that.


Posted by Poetry Scores at 6:28 AM No comments: