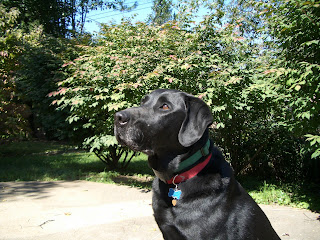 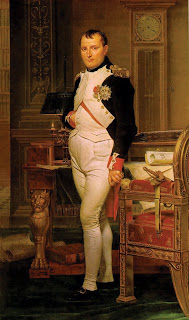 At Poetry Scores' 2008 Experiential Auction, Gail Renshaw bid and won the experience of having her dog Stanley portrayed as Napoleon Bonaparte.

This and two other images of Stanley have been forwarded to this year's portrait artist, Michael Lynch. Michael has had a tough year - tougher than most of us - but we know he'll get to it and we look forward to the result.

The 2007 equivalent experience resulted in Tom Danforth's dog being painted by Kevin Belford as Mona Lisa - the Mona Bob.

Some examples of Michael's work were posted on Confluence City to document the Monastic Workshop; more are forthcoming.

Proceeds from the auction fund Poetry Scores in its mission to translate poetry into other media. Our board meets Wednesday to discuss projects for 2009, but we expect to produce an art invitational to Sali's Ark by K. Curtis Lyle and a poetry score CD and art invitational to The Sydney Highrise Variations by Les Murray; we also may produce an art book to another poem.

Thanks to Gail and everyone else who contributed financially to our mission this year.
Posted by Poetry Scores at 8:20 PM

my girlfriend requests that i confirm my invitation to any future invitationals.... i, of course, assume that i'm already invited but my self-confidence (art-wise, at least) knows no bounds....

Yea, you didn't get a form letter b/c you waived your share of the loot, but you should have gotten an alternate letter inviting you to do our 2009 shows. Yes.