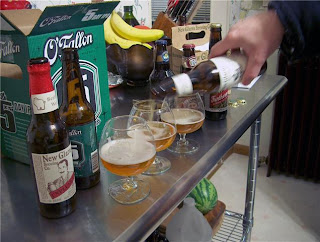 Our work last Monday on the poetry score to The Sydney Highrise Variations by Les Murray in Robert Goetz's home recording room (Studio Hate?) was a lesson in vocabulary.

We did a little bit of singing. Robert, Dave Melson, and myself all did some singing. On one take, I was supposed to be doing the lead and Robert was singing background vocals. We were trying to record the room sound, with both vocals going into the same microphone and onto the same track, for atmospheric effect.

Robert was standing at kind of an odd angle, and closer to the mic than me, for no great reason, that's just where he was when we ran through the session again. We listened back, and he was too loud in the mix. I suggested he move behind me - into the background.

We also did some beer drinking. Poetry Scores' double-Grammy-nominated mix and master guy Adam Long brought me back a raft of New Glarus beers from his recent northern sojourn to his home country of Minneapolis. I thought I should share them. I shared them. We split each beer three ways.

These were beers ... for a recording session. Session ... beers! Like, session beers!

Actually, that's spurious etymology, since a "session beer" (to fancy beerhounds like us) is a beer you can drink any time and more than one of, a so-called "lawnmower beer," and New Glarus ain't that.

I must clarify so that I don't seem too stupid. The mic we were
using is directional, meaning if
you stand at an oblique angle while
the front singer stands direct to the capsule you will most likely get a softer vocal presence.
I suspect that my initial vocal
rubbed the capsule the wrong way because it wasn't meant to recieve air pressure from that direction.
I was thinking about those classic
background singer setups during a live performance. You know they're really not in the background, they're off to the side but the vocal levels are mixed into the background by the sound guy. For bad vocalists like myself, you really should stand in the background because vocal control is not a strong suit.
Lesson: don't be fuss'n with geometry and acoustical physics while sessioning beers.