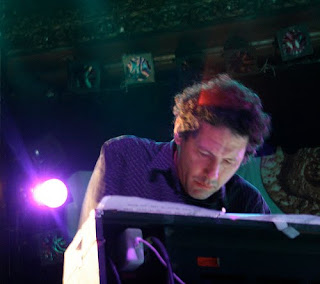 The independent musical artist, if you will pardon a pompous term, learns about what impact his self-promoted release is having, if any, by luck or narcissism. You either happen to be listening to the community radio station when a deejay dials you up - or you have been searching every nook of the internet for a trace of your record again.

Knowing my coproducer Matt Fuller, he just got lucky when he heard Ira Kaplan play a song from our latest poetry score on WFMU. Matt just called it to the attention of the main musicians on The Sydney Highrise Variations, those of us who bashed out the Three Fried Men songs to Les Murray's poetry that we recorded in Nashville.

The Nashville setting, in our lifelong musical partner Lij's studio, is what got us connected to Ira Kaplan. Ira's great rock band Yo La Tengo has been making records for many, many years with Roger Moutenot. Roger is a Nashville transplant, and like most people in its closeknit rock music scene, he and Lij know each other well. He came by the session one day, and to spell Lij on the drumkit he sat in for a stretch of the poem we scored as spoken-word rock, "The C19-20".

Ira Kaplan would be far too sly and self-directed to just play the song with his buddy on drums, when he dipped into his sack of rarities to get through the very last stretch of a good long guest deejay spot on WFMU, his local station in New Jersey. Nor did he pick one of our band songs that rock anything like Yo La Tengo. Those of us who have followed his band for years understand Ira to be a discerning and serious listener of all manners of music, and a sharp critic.

Though I was very pleasantly surprised to see that Ira Kaplan had played a song from the record I sent him on a really fantastic radio station, I was not surprised to find he had picked one of the oddest songs on a really odd record we made from the magnificent Australian poet Les Murray's long poem of modernity and cities, The Sydney Highrise Variations.

Ira played a song Matt Fuller and I cobbled together from field recordings and the poet's own performance of the poem, the recording of which was itself a field artifact. I was living in New York when Les Murray came through once, and with no connections in that city's vast music scene, I relied on a Turkish girlfriend who knew a club deejay in Astoria who had some spotty recording gear in his apartment. Alex the Turkish club deejay literally turned his back to one of the world's greatest living poets and played video games while Les Murray sprawled in a recliner and recited.

Working in his sister's spare bedroom in Hollywood, which afforded more space than Matt's crowded bungalow with baby, we dropped snippets of Les' reading over an old field recording of Lij's guitar parts. I have been writing songs through the mail with Matt, Lij, and John Minkoff for exactly as long as they have been moving away from me in St. Louis. I never abandon any of those tapes. I go back to them every time I start a new poetry score project. This guitar tape scrap is particularly cool because Lij just moans right through his guitar part. I hear a rising haze in Lij's moaning over Les' twangy Australian accent as the poet describes "the new city standing on its haze above the city".

I did a lot of final piecing-together with Adam Long, the boy genius who will probably get the Grammy this year for his mixdowns on the Fela! Broadway show record. (Two records Adam mixed were up for Grammys the last two years, in Original Broadway Cast Recording and Pop Gospel.) This part of Les' poem speaks of Sydney as a "flooded valley", and since it was raining in St. Louis when we were piecing it together, Adam stuck some fancy microphones out windows and drizzled all over the recording.

This was the song, "The new city standing on its haze," that Ira Kaplan played on May 12, 2010, sitting in for someone named Maria on WFMU. There are only three songs, a music bed for a back-announcement, and an outro coming after us on the three-hour show. Of course the radio experience is all about the sequence and the segue, and we come between "Merendolas" by Vale Tudo and "Lullaby" by Kenny Graham and His Satellites. I'll admit I don't know either of them any better than they know Poetry Scores or our band Three Fried Men, but that is the fun of having somebody like Ira Kaplan making up the playlist.

What we have out of this is not big sales and a hot hit record burning up the charts. What we have is a really amazing, three-hour mix tape - to guys who grew up on 90-minute cassettes, that is TWO mixed tapes, dude! - made by Ira Kaplan of Yo La Tengo, with a scrap of one of our oddball poetry scores worked in there at the end.

Please notice that on that WFMU playlist page, there are places to click to hear the show.

Picture of Ira Kaplan from Cause = Time.
Posted by Poetry Scores at 7:16 PM No comments: 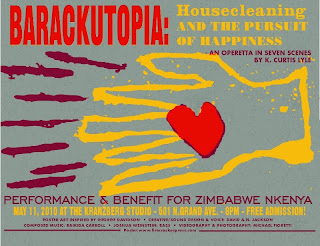 By Chris King
Of The St. Louis American

What is a poet to do, who wants to heal a musician friend?

How about stage a little multimedia opera about his personal journey, seen at once in terms of the poet’s own family, Barack Obama and Nelson Mandela?

“I’m trying to establish a narrative for Zimbabwe’s recovery,” says poet and elder K. Curtis Lyle, speaking of his friend and former collaborator, the musician Zimbabwe Nkenya. “If we can set an example for him, maybe it will bring him out of his paralysis and depression.”

The example will be set – and staged – 8 p.m. Tuesday, May 11 at the Kranzberg Studio, 501 N. Grand. The performance piece is entitled BARACKUTOPIA: Housecleaning and the Pursuit of Happiness: An Operetta in Seven Scenes. Admission is free, although donations will be accepted toward Zimbabwe’s rehabilitation and recovery from a massive stroke suffered last November.

Curtis will present his own poetic text, with live sound design by musician and multimedia artist David A.N. Jackson. Jackson will accompany the poet, along with bassist Josh Weinstein, and sing seven songs composed by the poet as part of the piece. Baikida Carroll has composed a musical score that knits it all together.

The performance also will have a visual element, consisting of photos representing the poet’s life from childhood to the present. The Kranzberg has a drop screen on which these images will be displayed; these photos will introduce each scene.

“My story is a story of migration,” Curtis writes in an artist statement.

“My parents migrated from the Deep South – Tennessee and Mississippi – to the West Coast – Los Angeles – during World War II. They have remained together for 69 years: he’s 95, she’s 94. They benignly govern a clan that extends over more than 24 states and four foreign countries. One was born in a black town in Mississippi, Mound Bayou. The other was born on the Choctaw Reservation, in Senatobia, Mississippi.”

In BARACKUTOPIA, he weaves the story of this intact, loving family with the larger fractured culture in which they and their people have evolved. The poet is a scholar of post-colonial Africa and of Africans in the Americas. He sees the rise of Nelson Mandela in South Africa and of Barack Obama in the United States as emblematic of a cultural healing that is possible with courageous leadership.

Whether performing this narrative of personal journey for a stricken friend will help bring that friend back to his strength remains to be seen.

“Sometime in the night on November 5, Zimbabwe had what the doctors referred to as a ‘massive stroke.’ He was air-lifted from Alton Memorial to SLU Hospital, but the stroke had already done major damage,” she relates.

“After five days at SLU, he was transferred to Jefferson Barracks Rehab Hospital – and was there until December 18. He has come a long way from where he was those first weeks in rehab, but he still has significant disabilities.”

“He is paralyzed, head to foot, on the right side of his body. He also has both aphasia and apraxia, which affect his ability to communicate. He understands everything that is going on, but is only able to say four or five words consistently and has the same difficulty with writing as with speech,” she says.

“While he was at Jefferson Barracks he developed an adverse reaction to a medication, and was sent to St. Anthony's Hospital. There they discovered that he had a large – and potentially life-threatening – abdominal aortic aneurysm. He had surgery to put a stint in for that in late February.”

Recovery for the stricken musician has been slow.

“The speech therapist tells us that he is making progress every week, but we find it difficult to be encouraged because it is so slow. He may be in speech therapy for years,” Deborah writes.

“Physical and occupational therapy were both discontinued in January because they weren’t seeing any improvement in his ability to move.”

“His ability to move”: nothing could be more important to a music, or a migration. Zimbabwe Nkenya, K. Curtis Lyle and BARACKUTOPIA certainly have their hard work cut out for them.
Posted by Poetry Scores at 10:10 AM No comments: