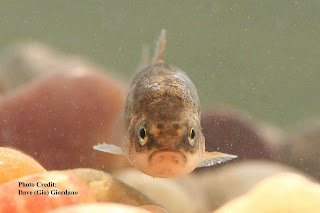 This animal is not the Las Vegas Dace, but rather the Speckled Dace. Unless there is a picture out there somewhere that even mighty Google can't find, the Las Vegas Dace vanished from the Earth without leaving behind even an internet avatar.

This is an extinct species from an extinct habitat - the Las Vegas Creek. He's a real nowhere fish from a real nowhere creek. St. Louis songwriter and musician Mike Burgett has adopted him and will write and record (hopefully, with his band The Lettuceheads) a song setting to Stefene Russell's poem "Las Vegas Dace" from her evolving poetic sequence, The Extinction of Species.

Get it? An evolving sequence about species that flunked the final exam of evolution? Making all his nowhere fish plans for nobody.

I did find crappy black-and-white images of our guy in an online archive of a 1984 publication about the species (Rhinichthys deaconi) by Robert Rush Miller. Talk about dancing on a fish's grave! The author is crowing "new species here!" when the fish he is naming is long gone, along with the creek he rode in on.

"The last known collection of the Las Vegas Dace was made in 1910," Rush Miller writes. "The fish probably survived in one of the springs and outflows until 1955 to 1957, when the policy regarding the amount of water that could be withdrawn from the artesia basin beneath Las Vegas was drastically changed. It was extinct before 1967."

He made it from glacial lakes dwindling all the way down to a desert creek only to be done in by unrestricted groundwater pumping to flush casino toilets and launder sheets soiled by tricks.

I can't figure out how to get these crappy images of our nowhere fish off the Pdf of the publication, so I'll just share some of Rush Miller's descriptions. Prose snapshots of a nowhere fish.

He was a conehead with a blunt snout and "a strong symphyseal knob" (or maybe he was just glad to see somebody). We're also told they had "rather chubby bodies," "a moderately large and often oblique mouth," and other common "characteristics of desert spring isolates."

A chubby conehead with a blunt snout, a typical desert spring isolato.

Colors? Nowhere fish had colors. Sure.

"Color: Life colors, as noted in the field by Carl L. Hubbs for UMMZ, were as follows: males with orange in axils of paired fins and along base of anal fin; those with strongest tubercles (extremely developed males) had this color extended backward to base of caudal fin, which commonly was orange near its lower edge. Some with red suffused over abdomen and an orange fleck at upper edge of gill opening. The general color in both sexes was olive, with blackish markings around scales near middle of body (back and sides); dorsal black spots often tend to occur, one per
scale."

Olive with splashes of orange and red. Like some tropical martini, smudged with black, for that desert isolato look. "Isolato. Why won't you come to your senses? Come down from your fences? Open -"

Oh, and how about home sweet home? That extinct habitat of his?

"Today, nothing is left of this spring-fed system but a hole in the ground with stagnant water at the bottom."

What happens in Vegas, stays in Vegas. Except for the creeks and the desert spring isolatoes. They vanish into oblivion.

We can't save them. Maybe we could have - royal we; species we - but we didn't. At least we can remember them. Mark Stephens, on another extinction, Max Potts: "I'll try to bury you the best I can in the words of a song."
Posted by Poetry Scores at 8:14 PM