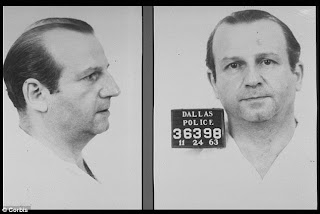 Poetry Scores is hosting a series of free public screenings of documentaries to recruit cast and crew for its next silent motion picture, Jack Ruby's America, based on the poem of that name by David Clewell.

Anyone interested in helping us make a period (1963) silent film about the Dallas burlesque club owner who shot Lee Harvey Oswald is cordially invited to attend. We need 100 actors of all races, genders and ages, in dual and multiple roles to make this movie, and all sorts of help with location, props, costumes, etc.

Given the time and place, we have a special need for white actors willing to wear their hair conservative (to play cops, federal agents, people on the street), but we also need to cast a Cuban revolution, Ruby's Jewish family, several ethnicities of gangsters and a bunch of burlesque dancers.

Note: Poetry Scores translates poetry into other media. We start by setting a long poem to music. We have done that for Jack Ruby's America and you can download or stream that poetry score on Box. We will shoot a silent movie to that score, so there will be no dialogue, no spoken parts.

These free documentary screenings will be held at 7:30 p.m. on four Wednesdays this summer at Mad Art Gallery, 2727 So. 12th St. Mad Art will operate a cash bar.

Capitalist Pig BBQ will be available any night there are enough pre-orders for chef Ron Buechele to fire up the Pig. Email those pre-orders to Ron@capitalistpigbbq.com.

These films are mostly pure period documentary footage. Almost every costume, prop and car we need is in these movies.

The pre-production will continue 4 p.m. to midnight Saturday, August 31 in a costume, prop and vintage car review party with night-swimming at Wesley Fordyce's spread. Directions will be sent later to participating cast and crew.

We will start shooting the movie on the 50th anniversary of the date Ruby shot Oswald (November 24). The shoot will take a year, but most actors will only have two or three days of work,

The text of Jack Ruby's America. David Clewell's poem is in print as the centerpiece of his newest collection Taken Somehow by Surprise, which any lover of poetry or American history buff should own, but cast and crew can download and read the Ruby poem here.

The poetry score to Jack Ruby's America. This is Clewell reading his entire poem, with musical interludes, posted to our Box account as 59 mp3s (the CD is out of print). This score is what our otherwise silent movie will sound like.Once you are in the Box folder, you can click on track 1, hit "play" and check the "Auto-play next file" and it will stream. Or, when you are looking at the list of all the mp3s, click "Folder Options" in the upper right corner. Click on that for a dropdown list that includes "Download Folder."