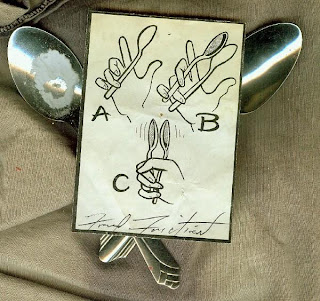 This is a pair of spoons that actually has been played by the great St. Louis spoonsman, raconteur, drummer, and songwriter, Fred Friction. I acquired them one late late night (early early morning) in the kitchen of his former home, adjacent to the former Frederick's Music Lounge, as folks were passing the guitar and telling tales.

When I told Fred I wanted a pair of spoons he had played, he got this pair out of his silverware drawer and gave them to me. When I asked how he could be sure he had played them before, he said, "Give them here" and proceeded to play them for awhile against his spindly leg, before returning them to me.

I would like to think the autrographed diagram of how to play the instrument dates back to one of Fred's epochal "Night of a Thousand Spoons" events in the old Cicero's Basement Bar, and The Skuntry Museum does possess one ticket stub from one of those shows I attended, but those nights were drenched in Jagermeister shots and memory no longer serves.

The white substance on the one spoon, by the way, is baking powder. I thought it would be good juju to use one of Fred's instruments as the prop junky spoon when we were making the film Blind Cat Black, based on the poetry score to Ece Ayhan's classic of Turkish surrealism, which has a junky transvestite streetwalker (played by local hip-hop diva Toyy) at its heart.

Anyone who knows Fred's ouvre as a songwriter will appreciate how very at home one of his spoons must have been in the filming of scenes from the life of a junky transvestite streetwalker!

I can't be certain that these are the spoons Fred performed on the score that Lij and I produced for Crossing America by Leo Connellan, though it's possible. Fred brought his own spoons to the session (at Pops Farrar's house, on the outskirts of Belleville, Illinois) and took them back home with him. They may have passed in and out of his silverware drawer over the years until finally passing into The Skuntry Museum collection that early early morning in his kitchen.

Lij and I heard Fred's spoons clacking away on part of the score that deals with the poet's petty jailhouse days in Colorado towns.

Friday night in Colorado towns
helping the sheriff make his count,
he’d work with you all week if you
helped him look ridding the community
of vagrancy and bums when the good
working voters came out to drink
and spend their futility on
draining beers and didn’t want
to stagger against indigents.
So into a cell with the door left
wide open unlocked, as long as
they were off the street, out
of the way provided with cigars
and cards and a chance to read
the paper, rest up for your time
on the town, when Monday morning
came again and none of the
sheriff’s men would do a thing
about your bumming people on
the street, no matter how many
complained, nor would the
sheriff’s deputies do a thing
about your even falling down
drunk of heat any other day
of the week, as long as you didn’t
fall head first through any windows
or knife anyone or do anything
you shouldn’t.

Our work on the score started with recording the poet Leo Connellan reading the entire poem in the basement of Curbstone Press, one of his last publishers, in funky Willimantic, Connecticut. Leo's reading of this section of the poem is one of his more wryly comic performances. I can hear in his voice all of the hard wisdom of the downbeat straggler who knows that cops and street criminals collaborate on the terms of the games they play far more than "the good working voters" would ever guess.

One of our motives in scoring Crossing America was to incorporate fragments of as many forms of American music as possible. For this piece, I came up with a singsongy melody built around the phrase (which would provide the song's title) "Ridding the Community of Vagrancy". The intent was to arrange the piece for a barbershop quartet, and I even made an overture to a local quartet, but in the end we did it ourselves: Lij, Matt Fuller, and myself, with Pops Farrar bopping along with a bass chorus of "bums! bums! bums! bums!"

Fred added his signature spoons to the stew, with Matt adding additional percussion intended to sound like something you might find to beat on in a jail cell, like steel bars, for instance. Lij's harmonica line completes an ensemble of bums you could imagine making do over the weekend in a jail cell "with the door left wide open unlocked," riffraff kept "off the street, out of the way, provided with cigars and cards and a chance to read the paper" and to make a little jailhouse music with their mouths, spoons from the evening mess, and a harmonica produced from a grubby pocket.

To commemorate the release of the new Fred Friction debut solo record Jesus Drank Wine, I'm doing a little series of posts devoted to Fred's contributions to Poetry Scores. Also in this series:

The Crossing America CD is still in print and available in various independent shops in St. Louis and through us directly, though all of the posts in this series have links to free mp3 downloads of a part of the poem and the accompanying movement of the score.
Posted by Poetry Scores at 8:10 AM