The use of "N-word" in "Blind Cat Black" 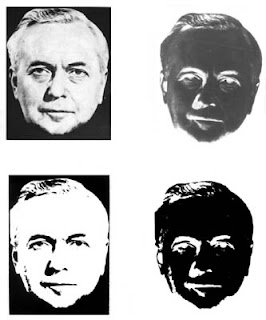 I wanted to explore the painting that St. Louis surrealist Andrew Torch made for the Poetry Scores Art Invitational dedicated to Blind Cat Black, in the context of the poem and the score we made to it, but I see there is an issue to address first.

Andy's painting is titled I am living in the drawer of a fifty-year-old witch. When I looked for this phrase in Murat Nemet-Nejat's translation of Ece Ayhan's poem, I saw that it appears in the first prose poem in the sequence that forms Blind Cat Black, which is titled "The Nigger in the Photograph."

I find it impossible to enter such a loaded and in most cases offensive word as the so-called "N-word" into a discussion of a painting and a poem without some explanation, so let's start with the explanation. Fortunately, we have an explanation from the translator, who chose to use the word in his translation of this strange Turkish poem.

When I started scoring the poem, to clarify the matter for myself, I asked Murat about his choice of the N-word in the translation. Of course, it’s a jarring and controversial word, and it’s not a word in the social vocabulary of anyone who works on our projects (which is why I use the goofy phrase “the N-word” here).

This is what Murat said in response:

The original word in Turkish is “arap” (Arab). This word in Turkish has two meanings, one more or less official and the other in street slang, as a lot of words in Ece Ayhan's poetry have.

One meaning of “arap” is “the negative of a photograph.” At the same time, in the street argot, when kids see a black person on the street, they call him “arap.” In that sense, “arap” is the outsider, the suppressed, which obviously is what a lot of Ece Ayhan's poetry is all about. In “The Nigger in the Photograph,” Ayhan is using the word in both senses – not only the “negative” of the photograph, but also the “hidden” identity which the photograph contains.

One characteristic of Ece Ayhan’s early poetry, and one of its greatest sources of power and shock, is his references to "forbidden" people (Jews, Armenians, Greeks, etc.), to their names and language. I decided “nigger” would have a corresponding shock value in English; besides, blacks have had a parallel outsider position in American society.

Here is a little more of the context of the poem where the word appears:

... I went to Jerusalem in that exile of the flower venders and got settled in the town clock... But to remember these things, I don't want to remember them... It had run out, the money I had saved selling flowers... This far away from Smyrna, I was pawned. Let this be the nigger in the negative of a photograph from me, will you receive it one day? I had taken it while learning Hebrew with my invisible dog inside a Jewess. Lonely and terrible. Under a huge tree which had shed its leaves, barely touching a chair.

The image is from a paper on the recognition of faces from photographic negatives. Next time: Andy's painting!

Posted by Poetry Scores at 3:42 AM

Black America and the N-word:

Thanks, I'll check this out. I abhor the word and would never use it in a social context. It's use in literature can be defended in certain instances. I was persuaded by the translator's argument for why this awful word was the best choice for this word in this poem. Also, in realistic novels if you are portraying characters who use the word and are writing realistic dialogue, it makes sense to use it, I think.