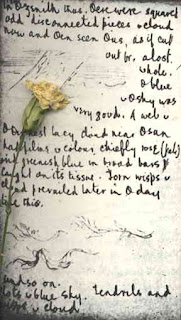 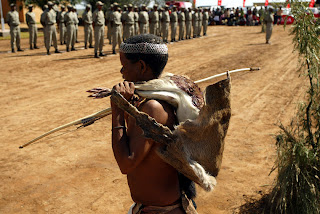 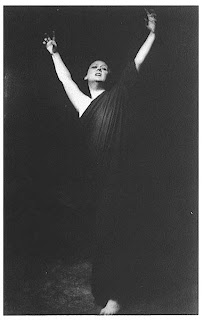 The mission of Poetry Scores is to translate poetry into other media. We began by scoring long poems musically, which remains primary to what we do. Then we began curating art invitationals, where the same poems are translated into images and objects. We have made one poem into a movie. Dance, however, is a form we have flirted with and talked about from time to time, without ever working out a project.

When we do, it sounds like we have a promising choreographer right here in St. Louis: COCA's Alice Bloch.

Kenya Vaughn reported the following arts feature for The St. Louis American before leaving town to attend the Barack Obama Inauguration festivities in the nation's capital. What Kenya has described in Alice's work on this program at COCA is a poetry score - most specifically, in the translation of the Gerard Manley Hopkins epistolary poem into a dance, though everything about this innovative program shares the spirit of what we are trying to do.

By Kenya Vaughn
Of the St. Louis American

What 30 years of experience as an educator, dance historian and choreographer have taught Alice Bloch about the art form may come as a surprise to many – especially aspiring dancers.

She wouldn’t dare say that those individuals who work until their toes bleed to master techniques and routines with precision are dancing down the wrong path. But Bloch believes that expression supersedes the technical elements of the form.

“For me dance, has always been about expressing human experience,” Bloch said. “Some people care about the technical – and it’s great. But for me it’s about reaching from within and trying to communicate experience.”

Next weekend at COCA, she will work with professional dancers, pre-professional COCAdance company members and other media elements – including poetry and drums – to present her philosophy in Dances – Self and Spirit.

The poetry of Christian mystic Gerard Manley Hopkins and the traditional ritual of the San of South Africa are primary sources of inspiration for Dances – Self and Spirit. Bloch has translated Hopkins’ passionate love letters to Mother Nature, told through stanzas. The dancers speak the words of the poems and rely on their cadences as a soundtrack to accompany their steps.

The movements within a San healing ritual are used to create a love offering to dance, nature and humanity. “They are hunter-gatherers, and they walk out in nature,” Bloch said of the San. “Some of the movement in this healing ritual is also part of the dance – kind of a life journey.”

The San-inspired “I Walk” is set to Bloch’s own text and the music of percussionist Evelyn Glennie. It walks the audience through all aspects of existence.

Through Dances – Self and Spirit, Bloch also pays homage to Isadora Duncan, one of the founding mothers of modern dance at the dawn of the 20th century.

“I dream of a dance that would be so pure so strong that people would say that it is a soul we see moving.” The quote belongs to Isadora Duncan, but Bloch recited the words with a sense of ownership and appreciation of the concept that she passes down to her students and audiences.

Dances – Self and Spirit will introduce many to Duncan’s work for the first time. “They are beautiful in a very flowing and powerful way,” Bloch said of Duncan’s choreographic presentations. “It’s not flashy, but it’s very rich and full and your whole body moves. They can be delicate and light – and can be absolutely wild.”

At a time when female dancers were thought of strictly as objects of sexuality, Duncan’s dances offered blessings to art and self-respect.

“She was inspired by waves in particular, sweeping back and forth across the stage,” Bloch said. “And she showed that you can really enjoy moving and be really luxurious and lush – that’s what it’s about. It’s not about selling your body.”

Although her life came to a tragic end in 1927, Duncan’s vision still thrives through artists like Bloch. As she continues the legacy of a dance pioneer, honors the Earth and celebrates life through several cultural traditions, Bloch hopes that audiences’ reaction to Dances – Self and Spirit are simple.

Bloch said, “One of the big things for everyone is to see how the body and the soul flow together and what that connection can do to help us be better people and do more good in the world.”

Sean O'Leary has scored a number of Hopkins poems; hear a demo online.

Vic Chestnutt has written a dream song about dancing with Isadora Duncan, which would be haunting even if it did not come from a songwriter in a wheelchair.

As for the San, the place to get lost online is looking at their rock art.

Isadora Duncan image from Library of Congress.
San image from ABC Australia.
Hopkins text image from The Words Group.
Posted by Poetry Scores at 8:40 AM