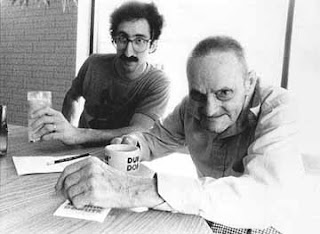 I have always honored David Greenberger and his Duplex Planet project as an ancestor of Poetry Scores. We recognized this in our project's prehistory as the field recording collective Hoobellatoo, which made David's house in upstate New York a stop on one of our first road trips.

We got to know David from his Ernest Noyes Brookings songwriting project. Ernie was a retired MIT engineer living at the Duplex Nursing Home (in Jamaica Plains, Massachusetts) when David got a job there as activities director, fresh out of graduate school.

One of those activities became giving Ernie a title every day and asking him to write a poem to it. This produced strange, often thrilling poems by an old man who had never thought to write a poem until David asked him to do so.

David began publishing Ernie's work, along with experimental forms of oral history and arresting photographs, in his zine Duplex Planet. Because this was presented as outsider art, rather than some old folks' thing, it attracted a hipster following, including people David knew from his tenure as bassist in the band Men & Volts. I understand the likes of David Byrne and Michael Stipe were among the zine's earliest subscribers.

I went home with a woman on Cape Cod one night during a band tour. In the morning, she played me the second volume of Lyrics by Ernest Noyes Brookings featuring all sorts of artists that interested me: XTC, The Incredible Casuals, The Young Fresh Fellows. She explained the premise behind the project - the young activities director from the New York music scene, the nursing home poet he had in effect created, the songs he had bands writing to the poems.

She told me she knew the producer (David) and thought he would like my band, Enormous Richard. So I sent him our cassette, and he did in fact like it. He sent us some poems by Ernie and asked us to pick one and put it to music. In so many ways, this was the beginning of Poetry Scores.

A little music industry history intervenes here. We picked the poem "February" and set it to music. By then, David had decided to set aside the twelve month poems for name acts (REM, David Byrne, Richard Thompson) in the interests of producing one blockbuster release that would promote the entire series. So we picked another poem, "15," and wrote a song to it that appeared on Outstandingly Ignited: Lyrics by Ernest Noyes Brookings (Vol. 4).

Unfortunately, the label doing the series for David, East Side Digital, dissolved before he ever got around to Volume 5, let alone the blockbluster Months record with the 12 name acts that was intended to follow it and shower fame on all that had gone before.

Both were released on the Enormous Richard CD Warm Milk on the Porch.

Photo of Ernest Noyes Brookings and David Greenberger by Stephen Elston from the Duplex Planet site.
Posted by Poetry Scores at 12:03 PM

thanks for reminding me to revisit
that record and break out my 5 issues
i happen to own from that trip...
i remember talking with the man and
not understanding that he was the man!