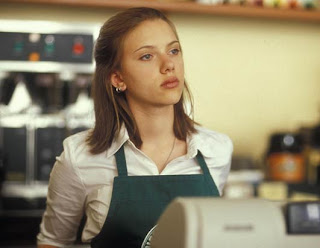 Yesterday, I had occasion to recall that much of Matt Fuller's compositional work on our poetry scores is done in his sister's garage in Hollywood, which offers a view of a strip mall with a shop used as a location for the filming of Terry Zwigoff's Ghost World. That means Scarlett Johansson worked there.

Which reminds me, I once actually tried to get Scarlett (pardon the undeserved assumption of first-name basis) to work on Poetry Scores!

It was 2005, and Scarlett was promoting the imminent release of a film, The Island, directed by Michael Bay and starring her and Ewan McGregor. The newspaper I edit was invited to the press junket in New York City, presumably because we cover the black community, the film had a featured black actor (Djimon Hounsou), and a metaphor of slavery (and the escape therefrom) underlies the film's science fictional plot.

This is the one and only film junket I have taken myself in my four-plus years on the job at the St. Louis American. (The opportunity arises about every other month; Bill Beene or Kenya Vaughn usually jump on it.) I wanted this one, because I wanted to meet Scarlett Johansson. I wanted to meet Scarlett Johansson because, like any human being with a pulse, I have a crush on her - but also because I love her voice and I want to hear it on a poetry score.

At Poetry Scores, we translate poetry into other media. When we translate it into music - the making of a poetry score proper - we strive for sung text with melody, but we also always include readings of portions of the poem that are forbidding to sing or demand to be spoken. For those lines, we rely upon the art of the voice.

The only actor, per se, we have used thus far is Stefene Russell, who did a reading on Blind Cat Black (qualifying as an actor, in this case, since it wasn't her poem). Actually, come to think of it, she read the title piece, "Blind Cat Black," backed by Steve Allain playing an adaptation of Dusan Bogdonovic's tune "Mysterious Habitats".

To live is to change, and I would rather grow than shrink, so why not incorporate more actors? Why not a famous actor with one of the great speaking voices of our time? Why not Scarlett Johansson?

In 2005, when she promoted the premiere of The Island, we only had completed one poetry score on CD, Leo Connellan's Crossing America. I took a copy of that CD with me everywhere I went during that junket, waiting for my opportunity.

I didn't expect much - Scarlett looked every inch the jaded star doing the junket to satisfy a contractual obligation. The time she spent with hotel rooms full of critics evidently was the most distasteful part of her day. I really didn't see an opportunity.

I then broke every rule of etiquette for fans and celebrities, let alone journalists and working actors, by interrupting her and explaining our project at lightning speed - "Hi, sexy superstar! We set long poems to music! We call it 'Poetry Scores'! Get it? Like a film score? Love to have you work on one with us!" - and handed her the copy of Crossing America I had been carrying around with me.

She accepted the CD, with what is best described as a grimace. I stepped out of the elevator at its next stop.

Needless to say, Scarlett's people have not been in touch. I hope whoever cleaned her room at the hotel had a taste for the poetry of the open road. I am quite sure she or he found a Leo Connellan CD in the trashcan.

Free mp3s
The Art of the Voice in Poetry Scores

Crossing America and Blind Cat Black are in print and available at independent shops in St. Louis and through us directly.

The image is of Scarlett Johansson on location in Hollywood acting in Terry Zwigoff's Ghost World. When she left the set that day, she had to have seen the garage where Matt Fuller wrote the guitar parts for many songs on our poetry scores.
Posted by Poetry Scores at 4:33 AM

Just as beautiful in the same room as on the screen, alas.