Letter from Les Murray: Of clairvoyance and those dear to us 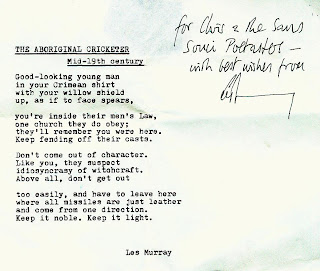 I suppose we all have different things that hold us together, that remind us we're doing what we're supposed to be doing and not wasting this gift of life. One, for me, is a letter in the mail from Les Murray.

Les Murray may be the greatest poet working in the English language. I also say this about K. Curtis Lyle and Paul Muldoon - not coincidentally, also poets who have worked with Poetry Scores. Shoot for the best, I always say.

Les is Australian. He grew up and lives again now in rural poverty, in Bunyah, New South Wales. However, he went to university in Sydney, which has always been his Australian image of The City - his indigenous London or New York. This year we are scoring his great urban poem, The Sydney Highrise Variations, his great poem of modernity and vertical space.

Les sat down to write me a note on January 5, 2009, responding to a very recent letter from me that had updated him on our efforts. I reminded him that our score to Sydney was moving forward and had taken on some of the ambience of a record he might be able to find online, English Settlement by XTC. I included a drawing of him by my daughter Leyla Fern, based upon a photograph of Les reading his urban poem in the session that will be incorporated into our score.

I also enclosed the historic edition of The St. Louis American celebrating the victory of Barack Obama. Les responded to all of these things in his handwritten letter, from which I quote selectively.

Thanks for all the good paper you sent, your letter most of all, but also the black newspaper with its total joy in the good news of Barack Obama.

You mention a long or book-length poem of mine, so I enclose it [Fredy Neptune; an autographed and inscribed copy]. Has not got to do with the harbour bridges of Sydney, but with the first half of the last century, in the Australian and certain other idioms of that time. Took me 5 years to write, in the 90s, between shorter poems.

I do love the pic. Leyla drew of me from that old photo. Scratching my head as to whether I met Leyla. I realise that no, I haven't - she was a mound inside her mother when I was briefly in their company. I've only ever seen her as a separate person in photos.

Fancy your seeing and reading Peter Alexander's bio. of me [which I started reading by coincidence on Les' birthday, as explained in my letter to him]. I did learn a bit from that book myself, mostly baby stuff, plus the awful details of Dad's failure to get the ambulance for Mum. My wife Valerie had sussed out that Dad's terrible grief was
at least half composed of guilt - I was always too close to it to sniff the suppression in it. Inability to break his language rules, to break Mum's privacy or his own, or talk about women's matters on an open phone line - my Aboriginal historian cousin Vicki Grieves told me, "Aboriginal people die that way all the time." And there's a deep streak of Ab. custom in countryfolk of all ancestries, in poorer Australia.

I'll get our electronic son Peter to dial up that CD you mention, English Settlement by XTC.

And here we are, V. & I, living in an empty nest wth the usual plethora of spare beds for grown children to reoccupy, especially round this time of year. Three are married, the other two are unlikely to follow. Clare might just - she works as a clairvoyant, but doesn't predict about herself. I still go on the road to earn a living, 2 months out of 12 on average. I think my best ever American tour was in early 2007. Atlanta, NYC, Vassar, NYU, a deli in Crockett CA and one more college in L.A. Peter our youngest came along and attended, voluntarily, 4 of my six readings. He's studying drama now and fixing computers for a crust. The strangely prophetic thing we saw in NYC was that the great bronze bull in Wall Street was missing. Wonder if it's back? Or where it got to?

Love & cheers to you & your wife & daughter & all those dear to you. And may the crazies &/or the unreconstructed never get a bend on your new President.

The disappearance of the bronze bull (and, shortly thereafter, of the bull market)! Interesting that Les and I also went through 9/11 together, and now the financial meltdown and the ascendency of Obama, too. Pretty good company for the experience of history. Not a bad use of the gift of life.

The son Peter referenced in Les' letter is autistic and the subject of the world's greatest poem about autism. This recording of Les was made by the BBC and is bootblogged here, but since Les gave me the CD of the session that the BBC gave to him, I feel authorized by the author himself to share them.

The image is an autographed typescript of a poem Les mailed me with a letter some years ago.
Posted by Poetry Scores at 9:06 AM

This poem about Les' son is one of my favorite poems of all time. I loved it even before spending lots of time with my autistic niece. But after that I loved it all the more. Les is not only a great poet, but a great soul.

Sitting by the warmth of the woodstove in trance with her first cup of coffee and cigarette this morning Florence responded with a reverent "Wow" to Les's reading of "It Allows a Portrait in Line Scan at 15". Having taught Special Ed for thirty odd years she remembers when "evil psychs" would talk of "refrigerator parents"

It was nice to hear Les's voice.

How is it that you find so much to blog about all the time. I'm required to write two blogs a month and I struggle with that.

Thanks for tuning in. It means a lot to me. Thanks to Florence. As for blogging, Dawn, you are a photojournalist, I'm a writer. This isn't what you do. It is what I do. Do a photo blog - you'll do it daily.