Fred Friction is not Orthodox - Orthodox 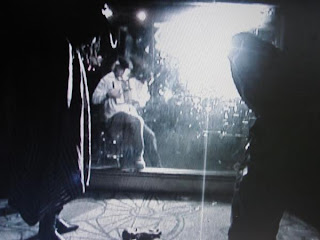 It's a forceful and slightly scary mission statement. The things that entice young people into rock music and tend to scare older people about it, Fred is saying, are still with him as he is getting older. I didn't burn out yet, and I don't aim to fade away. "I am not proper."

The song doesn't shy away from the danger of continuing to let it all hang out, of not picket-fencing off the restlessness and risk-taking of youth as a grown man. The song offers an elegy for Michael "Miko" Fleming, South St. Louis' latest in a line of rock & roll suicides.

Sometimes, Fred sings, in a ragged voice that is very believable as it sings such things, life is not a novel. "It just writes a suicide note."

These qualities in Fred's temperament and artistic persona have been strong in him since he first came at me, running down Delmar Boulevard in 1988. And that is why I thought of Fred instantly when we were scoring the great surrealist Turkish poem Blind Cat Black and came across a passage - the next to last piece in the long poem - that is about not being proper.

And the consequences of doing that, which might not be pretty.

A heretic dropped in a lake in Holland. His clipped wings, beeswax, in the swaddling fever. I saw thirty step-brothers jump me. Death isn't thought in good taste. At the water mill. Its crude incongruity, massive, a harlot's orthodoxy.

I could think about those lines for the rest of my life. In fact, I think I will. Of one thing only am I certain: when confronted with the line "I saw thirty step-brothers jump me," the first choice to read it - as long as he is alive to draw a breath and deliver a line - has to be Fred Friction.

And, if you can, you would want Pops Farrar creaking along behind him, adding the orange and red colors of his concertina and harmonica. We could, so that is what we did.

By Fred Friction and Pops Farrar
From Blind Cat Black

In the silent film we made to this score, we dramatized the stepbrother jumping of our hero as a zombie beatdown. After the violence, her corpse is replaced by the baby doll she cradles in the film's opening scene when she (as a he) is reading a comic book in bed. The Pharoah and Bodybag Man - the ancestors and cold hard death - come and pray over the baby doll. That is the image you see, above, with Christopher Y. Voelker standing in for the late Pops Farrar as the zombie concertina player.

I am writing a series of posts about Fred Friction's contributions to Poetry Scores in commemoration of his brilliant new debut solo record, Jesus Drank Wine.

Also in this series: