Cindy Tower riding the rubble down 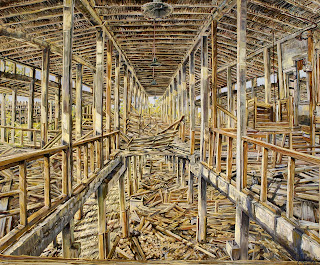 I suppose I can claim Cindy Tower for the Poetry Scores blog, since she contributed work to our most recent art invitational devoted to K. Curtis Lyle's poem Nailed Seraphim.

"Trespassing on abandoned sites of 19th and early 20th-century technological innovation, Tower produces works that are both self-portraits and metaphors for the state of the world and the human condition," the Sheldon press release states.

"The exhibition, which encompasses 15 paintings completed between 2005-2008 while she was in St. Louis, shows a progression in her handling of paint from her earlier grand-scale works that document every detail of the environment to her recent, more loosely-applied, drippy and disintegrating renderings."

That all sounds really good. However, this same PR has her show titled "Riding the RUBLE down," as opposed to "RUBBLE," making it sound like a day in the descent of the Russian stock market rather than study in urban disintegration.

John Eiler bought the piece Cindy contributed to our invitational, Wash dead flowers down with embalming fluid, and he geeked out on her work after he brought her painting into his house. One day when I was visiting him (and her painting), he showed me a website about her site work that results in her paintings. She brings muscle with her, as protection while she is foraging in these desolate urban environments. It was the first instance I have seen of an artist who works with armed security.

"Moving from New York in 2005," her bio reads, "Tower was visiting assistant professor of painting at the Sam Fox School of Design and Visual Arts at Washington University in St. Louis until 2008." Until 2008. Sounds like she wasn't offered a tenured position. Our loss.

The image is Cindy Tower, Last Stockyard, 2007, oil on canvas, 68 x 72 inches, courtesy of the artist and Bruno David Gallery.
Posted by Poetry Scores at 7:50 PM