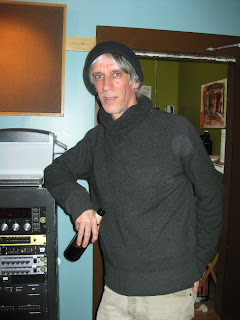 This dude is named Roger Moutenot. Roger is not exactly a household name, and like most genuinely creative people he probably prefers it that way.

I know his name from reading credits on Yo La Tengo records - he has produced their last fifteen records! - but that's hardly the half of it. The discography on his website as a producer lists a long list of names to conjure with: Velvet Underground, Rosanne Cash, Paula Cole, John Zorn, Gypsy Kings, Bill Frisell, the list goes on.

When we visited with Roger in Nashville last weekend, he was fresh from a project that had a Poetry Scores vibe to it - he had been recording a Danish band that set to music poetry written in an archaic form of their language.

But that isn't why Roger rates a note on the Poetry Scores blog. He actually has a performance credit on our next poetry score!

We recorded in Nashville at The Toy Box, a studio built into an expanded garage by Lij, my longtime collaborator and the original cofounder of this project. Lij and I basically created the form of the poetry score on a road trip together in the mid-1990s, listening to a field recording we had made of the poet Leo Connellan and wondering what we could do with it.

We decided to write a sounstrack to the poem - to score it like one would score a film - and here we are today, still doing that.

Our session in Nashville was scheduled to work on what will be our fourth poetry score, The Sydney Highrise Variations by Les Murray. We had an adequate working band assembled - Lij, Matt Fuller, Dave Melson, and myself - but Nashville is full of musicians, and Lij (a busy family man) doesn't get to see nearly enough of his friends down there.

In a weekend of sessions with his oldest buddies (us), he knew he could be improvisatory and invite folks over and see who showed up and what happened, without freaking us out the way a similar approach might have irritated a paying client. So he made some calls, left it open, and it was Roger who actually showed up, ready to play.

I always love watching or even hearing about Lij interacting with people who might be considered famous. (Roger Moutenot would no doubt cringe at that word applied to himself, but anyway.)

Lij can flat out hang. He is almost impossible to phase. I know a large swath of his family on both sides, and I can see why he is difficult to impress. You almost can't imagine a position of power or influence that is not held by someone in his extended family. They even have a U.S. presidential candidate - Adilai Stevenson - in the bloodline.

Lij is just numb to fame and fortune - he truly takes people as they come.

And Roger Moutenot comes cool. He showed up, accepted a beer, accepted a pair of drum sticks, and established a nice, tight pocket for a rock song Matt had written. I had nothing to do with this one, other than noticing it on a guitar tape he had sent to me and thinking it would work for a scrap of language from Les poem. Namely:

The Nineteenth Century. The Twentieth Century.
There were never any others. No centuries before these.
Dante was not hailed in his time as an Authentic
Fourteenth Century Voice. Nor did Cromwell thunder, After
all,in the bowels of Christ, this is the Seventeenth Century!

The two are one aircraft in the end, the C19-20,
capacious with cargo. Some of it can save your life,
some can prevent it.

Interestingly, Dave abbreviated Matt's original guitar part in a way that he thought made sense, in terms of structure. When he did this, suddenly the music was the perfect length to accommodate Les' reading of these lines with the repetitions that I had in mind to turn it into a song. It was kind of uncanny. Here is the song:

Lij plays piano on this one, though he is buried in this rough mix, and Roger deserves a background vocal track, though we may not end up using the track his voice is on, because I was too close to the mic and drowned everyone out and we had to recut it in the morning, without Roger.

But the backing vocals do include his touch as a producer. When I was reading the poem aloud to the backing track during playback, Roger started reciting key lines along with me. I can't remember whether or not I had it in my head to do that before he did it. That, of course, is the hallmark of a great producer - to lead the artist to their best ideas and leave them with the impression that the ideas were theirs, all along.

Photo by Dave Melson
Posted by Poetry Scores at 11:53 PM

Not to mention, Roger nailed the drum track on this one! What a pleasure it was to play with him.