Poetry Scores translated a Greek Surrealist poem into a BBQ 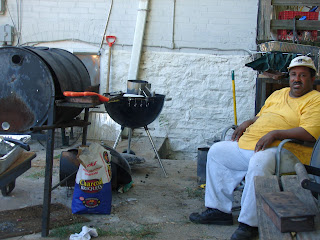 
Poetry Scores translates poetry into other media, and though we are artists and tend to focus on artistic media - music, paintings, sculpture, movies - we try to branch out. Yesterday, we translated poetry into a potluck BBQ.

The poem is Phantom of the Dreams' Origin by Andreas Embirikos, translated from the Greek by Nikos Stabakis. This poem is just jammed with things you can eat, and we asked people to bring something named in the poem to eat raw or throw on the grill. The grill was curated by Roland Franks, an actor in our movie unit who also is a competitive BBQ chef on summer weekends.

Jocko Ferguson, a board member who roadies for the movie unit and plays zombies, brought chicken breasts to throw on the grill. (Embirikos writes of "breasts.") Our board treasurer (and actor in our movies) John Parker brought big floppy mushrooms to grill. Karley M. King, who acts in our movies, brought pineapples to grill (Embirikos writes of being "brilliant and sensitive as a fruit shop," opening the door to all fruit. 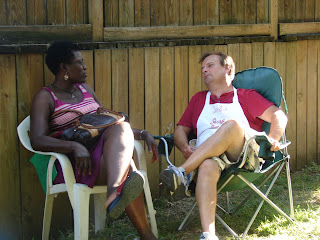 Paul Casey, who plays a huge role in the next movie we will release and is a big help with props, brought fruit to eat raw, including grapes, a fruit that gets a specific mention in Embirikos poem, which is a sequence of prose poems, one of them titled "Winter Grapes".

It is a very nutty poem, with almonds and hazelnuts, so I brought a Turkish sweet with hazelnuts sunk into powdery white candy. The poem mentions quinces only to say we have none, and though Stefene Russell (board secretary, poet, actor, visual artist) brought quince jelly, no one got around to eating any, so where Embirikos writes, "We have no quinces," at the end of this BBQ you could say no one had any quinces to eat, or we had no quinces.

Jay Alan Babcock, a visual artist (we cast in the last movie but were not able to use), brought limeade he made with his son Owen (one of the prose poems in Embirikos' sequence is titled "Lime"), which was my very special favorite treat of the day. The poem mentions both coffee and ice, so I brought a Thermos of hot coffee  and Leyla Fern King, actor and visual artist, brought ice that was combined into iced coffee.

I can't believe this poem has no "milk" or "honey," such dreamlike substances, but I brought canned milk and locally hived honey to sweeten the one iced coffee I served to board member and actor Amy Broadway.

Broadway herself was on the Nicky Rainey alternative menu plan. Most of us were working from an ingredient list I culled from the poem, but Nicky (poet and newest board member) went her own way and found "mole," refence to the mammal, but she added an imaginary Mexican accent and brought the thick chocolate sauce of the same spelling. She also encouraged Broadway to interpret the "bugle" in the poem ("bugle-calls of roaring vultures") as the conic corn chip Bugle.

As if anticipating just such a revel, Stabakis translated an Embirikos word as "refreshment," usefully authorizing any refreshing drink of any kind. There was a fair amount of refreshing going on. I am a stalwart advocate of St. Louis tap water, have never tasted any better, and really nothing is more refreshing than water, so I brought a giant pitcher and kept filling it up with water from the spigot on the side of the house.

It was so damn hot that day I actually brought home on the floorboard of my car the last pitcher of water I drew from the spigot, iced cold with Leyla's Greek Surrealist ice. It was so damn hot it just would have seemed sacriligeous, a sin against the sun, to throw out that cold water in that burning heat (and my spouse likes her kitchen utensils to come home). I still have half of that pitcher of water from the BBQ, and just now it occurs to me that I will bottle it and save it as souvenir Greek Surrealist St. Louis tap water. 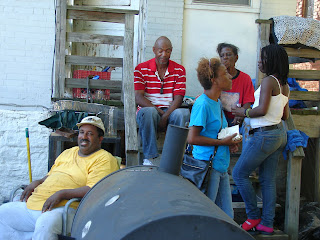 Roland with his people. One of the reasons we want to translate poetry into
non-artistic media is to involve people more likely to go to, say, a BBQ
than a poetry reading. Roland's friends got right away
what we were up to and got a kick out of it.

Posted by Poetry Scores at 7:16 PM