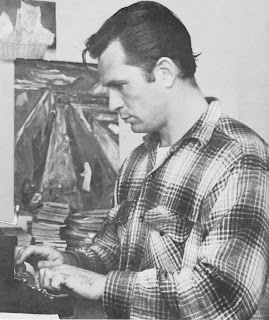 I just read Jack Kerouac's The Dharma Bums (1958) by accident. I read it to see how Kerouac handled the character modelled on Albert Saijo, but after finishing it and never encountering a Japanese-American free spirit, I figured I had made a mistake. Now I see the Saijo character Baso figures in Big Sur (1962), not Dharma Bums. So it's back to the library for Big Sur.

I was introduced to Saijo by Kevin Diminiyatz, a lecturer in the Art Department at the University of Hawaii-Hilo. We are starting a Poetry Scores Hawaii offshoot in partnership with the department, and Kevin suggested that we do a project around Albert's work.

Though a Japanese-American from California, Saijo settled near the end of his life and died at Volcano, on the Big Island of Hawaii, just up the Volcano Road from Hilo. I expect we'll find the right Saijo poem to score in his collection Outspeaks published by Bamboo Ridge Press of Honolulu.

In Dharma Bums, the perennial second fiddle, hero-worshipping Kerouac is focussed almost singly on Gary Snyder, named Japhy Ryder here (except in one spot where Kerouac loses track of his roman a clef and calls Japhy "Gary"). Reading the book was hardly a waste of time, for The Dharma Bums has the best fictional treatment I have encountered on one of my favorite human activities: co-translation.

The Kerouac character is squatting in the Berklee cabin of the Snyder character when he gets interested in his friend's translation-in-progress of the Chinese poet Han Shan.

I bent over his shoulder and watched him read from big wild crowtracks of Chinese signs: "Climbing up Cold Mountain path, Cold Mountain path goes on and on, long gorge choked with scree and boulders, wide creek and mist-blurred grass, moss is slippery though there's been no rain, pine sings but there's no wind, who can leap the world's ties and sit with me among white clouds?"

"Course that's my own translation into English, you see there are five signs for each line and I have to put it in Western prepositions and articles and such."

"Why don't you just translate it as it is, five signs, five words? What's those first five signs?"

"Well then, translate it 'Climbing up Cold Mountain path'."

"That's the third line, would have to read 'Long gorge choke avalanche boulders'."

"Well yeah, I thought of that, but I have to have this pass the approval of Chinese scholars here at the university and have it clear in English."

It's an exchange that will be familiar to anyone who has ever worked collaboratively on a translation. Kerouac has captured a classic ying and yang of cotranslation, with one translator (Snyder) pushing for adding more context and implied grammar from the target language, while the other translator (Kerouac) pushes for a more blunt, stark, literal translation of the source.

Note that this insightful passage about revision in poetic cotranslation is the work of the ballyhooed master of "spontaneous prose". The Beats gave generations of writers the liberty to let their words flow without revision of editing, but in fact they were skilled revisers and editors of themselves and each other.

For the outcome of this wrangling over the revision, we can look to Snyder's published translations of Han Shan (1958):

I'd say Jack helped him out here.

Image of Kerouac retyping his scroll of The Dharma Bums borrowed from Pitoucat.

Posted by Poetry Scores at 6:24 AM