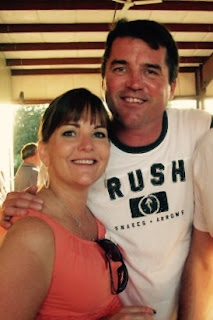 Monica and Skoob at a recent high school reunion in Granite City.

"Grandchildren of Genocide" is a new score of modern poetry from Armenia co-produced by Robert Goetz and Chris King (that's me) to coincide with the centennial of the 1915 onset of the genocide of the Armenians by the Ottoman Empire.

Robert brought the project to Poetry Scores to honor an Armenian woman. I took the idea to heart right away, because one of my best friends growing up was an Armenian girl, Monica Fanning. We were part of a large circle of best friends that also included her little sister, Leigh Ann, and their house was one of our safe havens, where our hostess was their Armenian mother, born Clara Takmajian.

This was in Granite City, Illinois, a steel town, where in our parents' generation "white people" was just starting to become synthesized out of more than a dozen fairer-skinned ethnicities drawn to the steel mill. In our generation, it still meant something if your parent was, say, Armenian (or half-Armenian, in the case of Clara). To me, it meant you were smart, outspoken, amazing looking, hilarious, and adventurous, like Monica and her sister (their mom, Clara, was pretty cool, too). 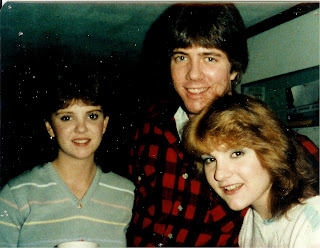 Leigh Ann and Monica with Jay, one of the other guys in our friendship circle


As Robert and I started to work on "Grandchildren of Genocide," it started to sink in how fitting it was for Poetry Scores to be doing an Armenian poetry project. Because, as a matter of fact, the earliest roots -- the seed, actually -- of Poetry Scores was our first, adolescent gig in an Armenian girl's basement.

For Monica's thirteenth birthday party, me and another guy from our friendship circle, known as Skoob, performed our first concert. Our band was called Superpig on Broadway. The instrumentation was Skoob on autoharp and harmonies with me on lead vocals. It was an all-original set. Heavy Billy Joel influence, a little McCartney and Doors (on autoharp, mind you). Monica remembers dousing the basement lights and the audience members illuminating Superpig on Broadway with flashlights.

We rehearsed hard for that set, perched on the window ledge of my upstairs apartment bedroom. We were so sure of our future success that we made coupons for a free copy of our first record, already pre-titled the eponymous "On Broadway," and handed them out to our friends at the basement birthday party. Monica somehow held onto hers. 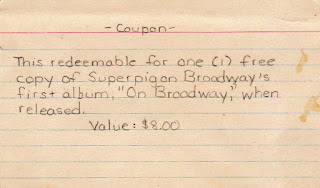 Nine years and a lifetime later, Skoob returned to Granite City after graduating from college on the East Coast. I was hanging around waiting to start graduate school at Washington University, and for summer kicks we started up the band again. Superpig on Broadway was reborn as Enormous Richard and the Love Turkeys, which got shortened to Enormous Richard by the time we finally reached the stage -- as an actual rock band; we left the autoharp behind and grew guitars and amps. Our very first gig was written up in the daily newspaper. We quickly built a local following, started to book shows out of town and then ended up on the road for five years, undergoing a name change to Eleanor Roosevelt along the way.

Skoob got out of the van to start a career, eventually, but I stayed on the road. The rest of our band, my friends from Washington University, transformed ourselves into a field recording collective called Hoobellatoo. We recorded oral narratives of elders, an African drummer's entire cultural repertoire, mountain fiddlers and banjo players, a one-man band in Boston, the neglected blues legend Rosco Gordon, and a bunch of poets at an independent publisher in Connecticut. One of the poets, Leo Connellan, stood out to us, and we decided to set his hitchhiking epic "Crossing America" to music. It was our first poetry score, and it was featured on the BBC. So we decided to focus on what was working. We became Poetry Scores. We're still doing it, setting poetry to music (and other media). 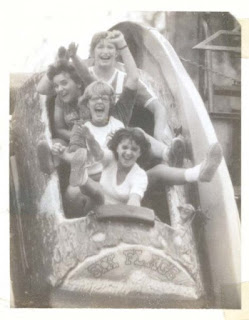 Monica (third from front) and Leigh Ann (front) kicking it
with a Takmajian cousin and another best friend of ours, Mush.

Posted by Poetry Scores at 3:39 PM