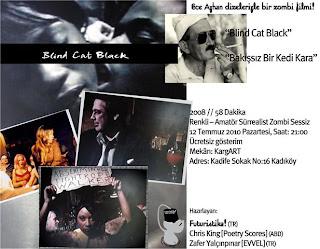 So as I have told anyone who would listen, and plenty who didn't, the first Poetry Scores movie Blind Cat Black is screening in two Turkish cities in July.

The connection is the late, great Turkish poet Ece Ayhan. He wrote Blind Cat Black, which Murat Nemet-Nejat translated into English. Poetry Scores scored the translation, then produced a movie to the score.

Ece Ayhan died as we were scoring Murat's translation of his poem. His death helped to spread his name. His work has been enjoying an intense, quasi-underground revival. This makes it weird, since our movie is a zombie movie - the revival and the undead.

The organizers of major Ece Ayhan events in July, including the screening of our movie, conducted a long interview with me (Chris King), in English. Baris and Ipek Yarsel published it in Turkish, in their magazine Futuristika! I wanted to wait a bit, and then publish it in English. Here it is.

Well Baris, I really have to thank you for your interest. I will answer your questions and then tell you a few things.

Q1- We love zombie movies, we love silent movies, but for the first time we hear about a silent zombie movie. Did you have any inspritation from the German expressionist films such as The Golem, Nosferatu?

A2. Please understand first that I was a totally amateur first-time filmmaker, though I did have considerable help from more experienced movie people, particularly Aaron AuBuchon, Chad Ivins and Kevin Belford. But it was my vision and my deadline, and I don't think any of the other guys would consider their work on my movie to be one of the better things they have done.

I say all this to qualify any notion of our being "inspired" by these great movies. It so happens that I personally favor early silent film above all other kinds of film, which is one reason I wanted to make a feature movie with no speaking, only music, which was how the old "silents" were experienced. They were not, in fact, silent; they just were not talking, or "talkies". In fact, they were screened with live music. Our movie was filmed and edited to a "poetry score" I cowrote and coproduced in which we set to music, word for word, an English translation of the Ece Ayhan poem "Blind Cat Black".

By the way, when Aaron AuBuchon, a professor of video here in St. Louis, Missouri, agreed to help me with the movie, he had me over to his house and showed me "The Cabinet of Dr. Caligari" by Robert Weine. It is a classic of German Expressionist silent film. We agreed this film would be a great cinematic model for us. In the end, though, my amateurism and the rush of the deadline for the local filmmakers festival were such tremendous impediments to the quality of our movie that no one would think to mention these two films at the same time.


Q2- Zombie is mostly an American concept. According to us, Ece Ayhan is not a poet of a specific time and a place. In his poems, the underdogs, the ones gone astray, the ones left aside are important. Could we describe this movies' zombies in a similar concept? Or are your zombies party animals? Are they fierce? How do you portray them in the movie?

A2 - Ha! I love you! You have only seen bits and pieces of my movie on YouTube (I guess, if that), but you actually understand a defining premise of the movie - though it came about almost accidentally.

Let me explain a little bit. I consider the technique of Murat Nemet-Nejat's translation of "Blind Cat Black" to be Surrealist. So I wanted the film made to the score of the poem to have some Surrealist aesthetic. But the last thing I would want to do would be to imitate Surrealist films I have seen. I also really wanted to make a narrative movie, with characters who interact in a complicated story, rather than some purely experimental thing.

At some point in working all this out, Aaron AuBuchon made a passing reference to the Zombie Squad, or to there being zombies all over St. Louis. It is true, and I had no idea. Since I moved back to St. Louis almost six years ago, I have been a newspaper journalist with a small child, so my life is mostly very settled between work and home. I don't know much about some of these flourishing subcultures in our city, like the Zombie Squad, who mix very serious survivalist concepts, and wonderful community things like blood drives (get it? blood?), with the fun of dressing up like a zombie and running around.

I believe in working with what you have, and it turns out zombies are an abundant natural resource here in St. Louis. So I had the idea of casting a large number of zombies and having them people the film, as a kind of all-purpose Surrealist effect.

Having served that necessary (to me) purpose, the zombies also then took on the symbolism of the life that is death that is the life of the streets, the scary urban underworld. "Blind Cat Black," as a Surrealist and imagistic poem, is subjective to infinite interpretations, but in my concept for the movie I followed the translator's reading of the poem as a story about a boy streetwalker (or a transgendered streetwalker) who comes of age. This makes the zombies a symbol of the dangerous hustlers that surround the boy/girl and threaten to drag him/her down.

Q3- Are you interested in any other Turkish poets?

A3 - Very much so. My best friend when I lived in New York was Defne Halman. Her father is Professor Talat S. Halman, the most important figure in getting Turkish poetry into English. Murat got me started on this journey, by giving me his translation of "Blind Cat Black," but through the Halmans (and also, later, Murat again) I came to know many more Turkish poets. I have also set to music short poems by the Garip poets (Orhan Veli, Oktay Rifat, Melih Cevdet), and Defne Halman and I co-translated all of Orhan Veli's poems into English.

Q4- Since you met with Ece Ayhan's inner world, what do you think has changed in your life?

Q4 - When I first was given "Blind Cat Black" by Murat, the book was brand new, the only time you can sell a book review. I was fortunate to review it for a great New York-based magazine, The Nation (my review also was translated into Turkish and published there; amazingly, Professor Halman knew me through this review when his daughter first introduced us). In that review, I say I think "Blind Cat Black" is the saddest book I have ever read. I still think that. The poem gave me many images, colors, moods for sadness and disappointment, for alienation, for the failure to connect, for love and sex that is impossible. Before I settled down and started a family, my life as a rock musician was sometimes very reckless and dangerous, and "Blind Cat Black" is a prism that helps me look back at those years. It gives me a vocabulary I did not have before.

Q5- We guess you already know by now that many names in Turkish language have a substantial meaning and Ece means "The Queen, The Almighty, The Leader"; it is an ancient, pure Turkish name. Your surname is "King". We love coincidences though we don't believe in them; everything in life happens by either conscious and/or unconscious chioces of individuals. How did/do you feel about such a cross match?

Q5. Well, this really amazes me. I am kind of speechless. (I am typing this answer in an email, but in a deep sense I am speechless.) No one told me that about his name before. Now I understand the part of the poem I set to music as the song "My Son is a Queen" is a pun on the poet's name. But, comparing the poet Queen with the filmmaker King brings us back to the movie and the concept of the movie.

Following Murat's idea that the poem is about a boy or transgendered prostitute, I wanted to dramatize this by having two lead characters, a tough girl who sometimes presents as a boy, and a boy so pretty he could be a girl and sometimes presents as a girl. This didn't quite work out, as the pretty boy I wanted to cast failed the makeup test (that was his opinion) and decided he would look ugly as a girl. So we settled with a male actor who had a tougher look, and because of his rougher look and edgier energy we had to play around with the duality in different ways. It made for a very different movie than the one in my head, but I still like the way it turned out.

Prior coverage of Blind Cat Black in Futuristika!